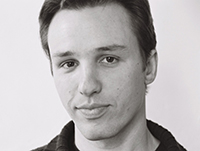 Markus Zusak is an Australian writer of German and Austrian descent. He is the author of six books including a number of international best-sellers.

He pursued a teaching degree at the University of Sydney before becoming a professional author. His first three books The Underdog (1999), Fighting Reuben Wolfe (2000), and When Dogs Cry (2001) formed a trilogy centred on two brothers of the working-class Wofle family. The latter two novels received the CBCA Children’s Book of the Year Awards in 2001 and 2002 respectively.

The Messenger followed in 2002, and won the 2003 Ethel Turner Prize for Young People's Literature at the New South Wales Premier's Literary Awards. His most successful novel to date is The Book Thief (2005), which won the Kathleen Mitchell Award in 2006 and the Michael L. Printz Honor in 2007. It has been published in more than thirty languages and has been adapted into a film starring Geoffrey Rush and Emily Watson (2013).

Felicity Castagna has written on The Messenger (2002) for ABR as part of the Reading Australia project. Click here to read her essay