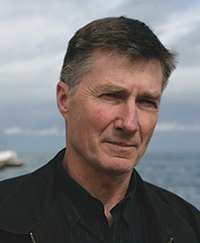 Garry Disher is an author of crime fiction and children’s literature.

He graduated with a Masters degree in Australian History at Monash University, and was awarded a creative writing fellowship to Stanford University in California. On his return to Melbourne, he taught creative writing. He has published over fifty books including novels, crime thrillers, fiction for children and young adults, creative writing handbooks, and Australian History textbooks. He was the winner of the Ethel Turner Prize for Young People's Literature at the NSW Premier’s Literary Award in 1999 for The Divine Wind (1999). He also won the German Crime Prize twice, and two Ned Kelly Best Crime novel awards for Chain of Evidence (2007) and Wyatt (2010).

He currently lives on the Mornington Peninsula, south-east of Melbourne.

Alice Pung has written on The Divine Wind (1999) for ABR as part of the Reading Australia project. Click here to read her essay