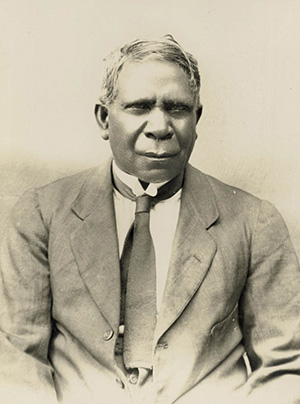 David Unaipon (Wikimedia Commons)David Unaipon (1872–1967) was an Indigenous-Australian preacher, author, and inventor, whose contributions to science and literature helped overturn many of the prevailing negative stereotypes about Indigenous peoples in Australian society. In 1909 he developed a sheep-shearing device which was to be the basis for modern mechanical shears, and spent much of his life attempting to create a perpetual motion machine, among other inventions. He was the first Indigenous author to be published in English, for Myths and Legends of the Australian Aboriginals (1930), but was uncredited for his work. In 2001, the book was republished under the author's name as Legendary Tales of the Australian Aborigines. His varied interests encompassed science and engineering, myths and legends, philosophy, theology, poetry, and Indigenous affairs. David Unaipon was born in South Australia at the Point McLeay Mission on the shore of Lake Alexandrina, into which the Murray River empties. The Mission is now known as the township of Raukkan. Unaipon is buried in its cemetery.

Billy Griffiths, author and historian, has written on Legendary Tales of the Australian Aborigines (1930) for ABR as part of the Reading Australia project. Click here to read his essay.

'On the Shore of a Strange Land: The story of David Unaipon' Radio National's Hindsight podcast, 11 July 2010

'An Aboriginal Intellectual', The Observer, 10 October 1925 (accessed via National Library of Australia's Trove)

David Unaipon's patent for an 'Improved mechanical motion device', lodged in 1910 with the Department of Patents, Commonwealth of Australia.

Jenkin, G. (1979) Conquest of the Ngarrindjeri: The story of the Lower Murray lakes tribes, Adelaide, Rigby.