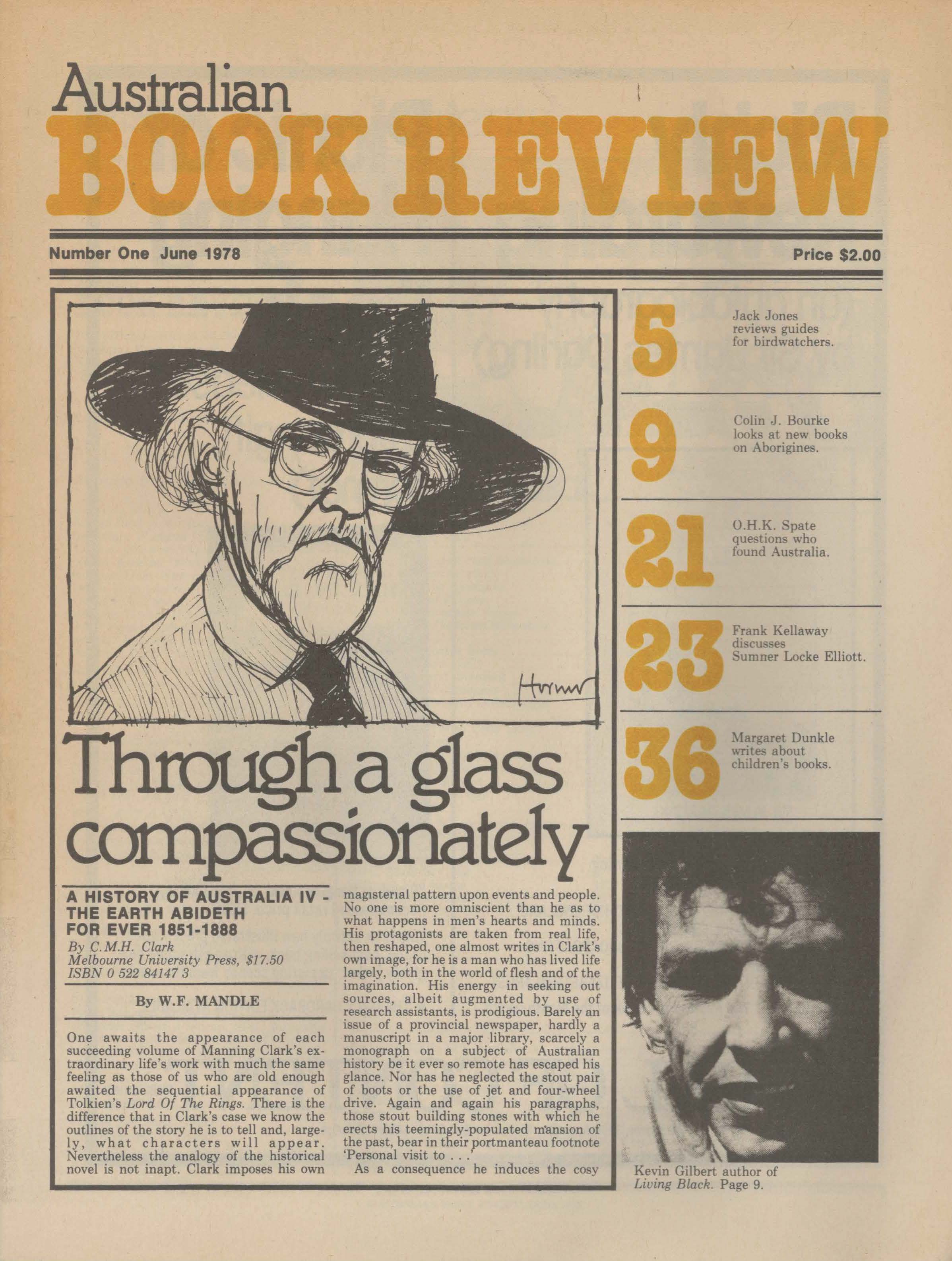 Issue #1, June 1978Australian Book Review is one of the country’s leading cultural magazines. Founded in 1961 in Adelaide and revived in Melbourne in 1978, it is an independent, not-for-profit magazine committed to publishing critical and creative writing of the highest standard. Through its print and digital publishing, website, prizes, fellowships, events, and partnerships, ABR makes a major contribution to Australia’s culture of ideas.

ABR is a strong advocate of proper support and remuneration for freelance reviewers. We pay for everything we publish – print and online – and we pay increasingly well.

ABR is a powerful generator of ideas and creative writing, and a key supporter of fresh talent. Few publications support writers and editors through such varied and lucrative programs. 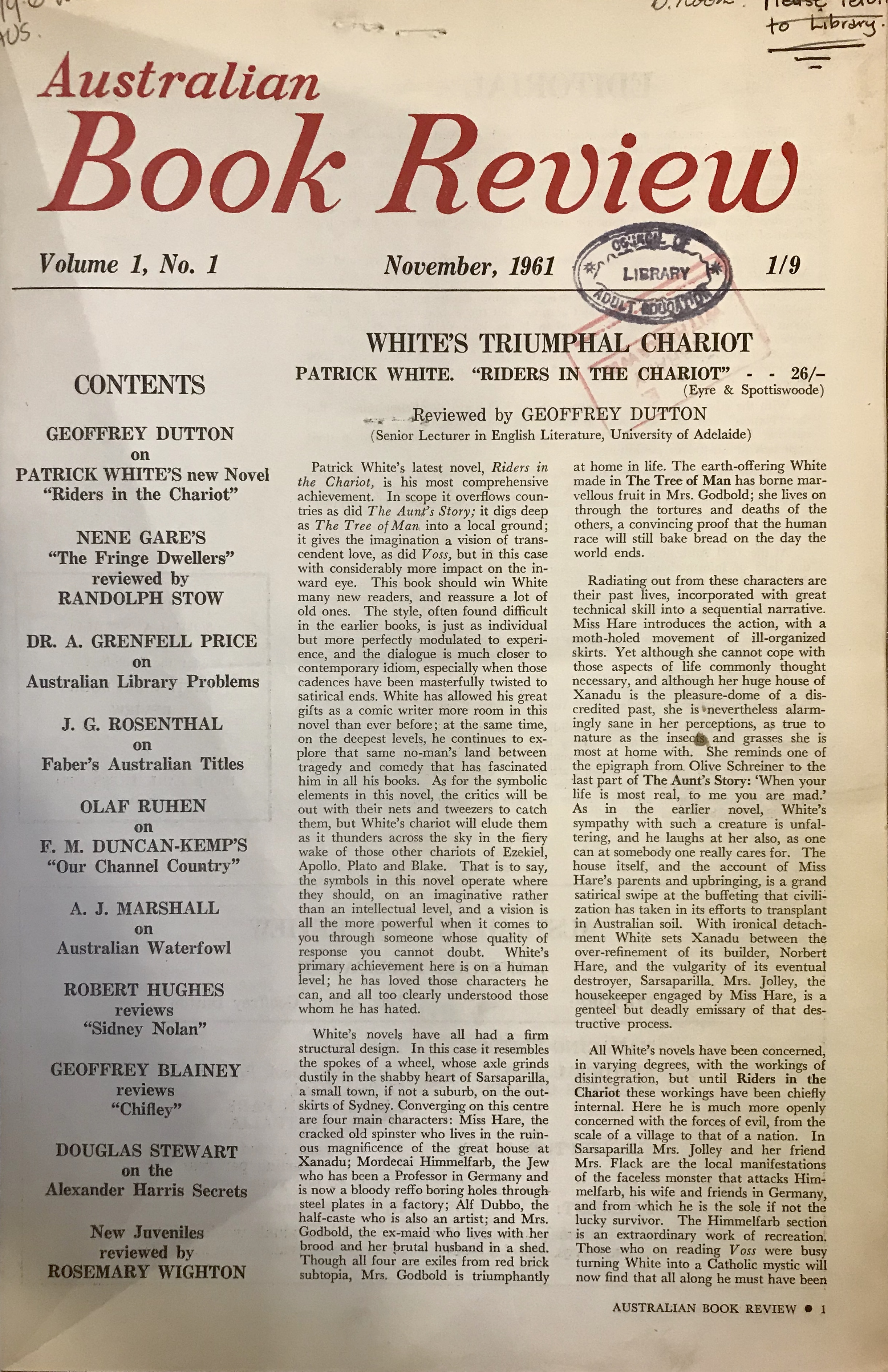 Find out more about ABR Staff, the ABR Board, the ABR Laureates, and contributors to the first and second series. A timeline of major events from ABR’s history can be found here.

ABR publishes reviews, commentaries, interviews, essays, surveys, and creative writing. In general ABR publishes approximately 500 features in print each year by 300 contributors. Roughly 90 or 100 of these contributors will be new to the magazine. ABR is open to approaches from new contributors and you can find out more here. ABR publishes an annual index of our print content here (from 2017 we have also indexed our digital content). Prior to 2021, ABR published ten issues per year. In June 2021, we added an eleventh issue.

ABR regularly publishes surveys of groups of critics, publishers, and commentators on a range of subjects including the following: Books of the Year, Arts Highlights of the Year, and Publisher Picks.

Back in 2009, when we sought readers’ nominations for the ABR Favourite Australian Novel (any era, any genre), we anticipated goodly interest, ABR readers being a passionate and well-read bunch. But we hadn’t expected to be inundated with quite so many faxes and emails. In the end we received thousands of votes for some 290 Australian novels. Tim Winton’s Cloudstreet, a perennial favourite since its publication in 1991, was the overwhelming favourite – by a margin of three to one to its nearest rival, Henry Handel Richardson’s The Fortunes of Richard Mahony, which was closely followed by Patrick White’s Voss and Winton’s most recent novel, Breath. Particularly heartening was the large number of nineteenth-century novels and those published before the remarkable expansion of fiction publishing in the last quarter of the twentieth century. The following feature, which appeared in the February 2010 issue, lists the top twenty Favourite Australian Novels.

In 2019 we asked readers to nominate their Favourite Australian Novel published since 2000.

ABR, though not politically aligned, is an engaged and responsive magazine. From time to time, we publish open letters on key social or political questions. These include an Open Letter on Marriage Equality and an Open Letter on the importance of saving the ABC.

Not all ABR’s publishing appears in the print magazine. We publish a wide range of online exclusives and previews including book and arts reviews, creative writing, essays and interviews, and podcasts. These appear online in ABR Arts, States of Poetry, Reading Australia, ABR Fiction, Book Talk, and ABR Online Exclusives.

To recognise the work of distinguished Australian artists, ABR has to date named two ABR Laureates.

Since 2011 ABR has awarded twenty-one Fellowships to twelve women and nine men. The Fellows are listed below under the year of publication. Find out more about the Published and current Fellows and read their essays.

"What is Australia, anyway?" The glorious limitations of the Miles Franklin Literary Award’ by Patrick Allington
‘Sweeping up the Ashes’ by Rachel Buchanan

'Man on the Margins' by Jennifer Lindsay

‘Media Don’ by Ruth Starke
‘Everyone’s a Critic’ by Kerryn Goldsworthy
‘Olive Cotton at Spring Forest’ by Helen Ennis
‘Patrick White: A theatre of his own’  by Andrew Fuhrmann

‘Seeing the Wood for the Trees’ by Danielle Clode

‘Sound Bridges: A Profile of Gurrumul’ by Felicity Plunkett
‘The Golden Age of Television?’ by James McNamara
‘The Scientist of his own experience: A profile of Gerald Murnane’ by Shannon Burns
'The Forest at the Edge of Time' by Ashley Hay

'Satan Repentant' by Michael Aiken
'How Do We Live With Ourselves? The Australian National Conscience' by Alan Atkinson

‘Defying the Moment’, 'The art of pain: Writing in the age of trauma’, and ‘'We are all MFAs now!'  by Beejay Silcox

'Notes on a Pandemic: How society has responded to Covid-19' by Hessom Razavi
Felicity Plunkett reviews Summer by Ali Smith
'Failures of imagination: A journey from Tehran’s prisons to Australia’s immigration detention centres' by Hessom Razavi

In 2021, with support from the Judith Neilson Institute for Journalism and Ideas, ABR began offering paid Editorial Cadetships. The first of these ABR Editorial Cadets is James Jiang.

Find out more about past Editorial  Cadets and Interns.

‘Milk Tray’ by Claire Aman
‘What’s Richard Ford Got to Do With It? by Gaylene Carbis
‘Before He Left the Family’ by Carrie Tiffany (joint winner)
‘The Neighbour's Beans’ by Gregory Day (joint winner)

‘The Elector of Nossnearly’ by Rob Magnuson-Smith (winner, UK/US)
'Borges and I' by Michelle Cahill (second)
‘Crest’ by Harriet McKnight (third)

‘Ruins’ by Madelaine Lucas (winner, US/AUS)
‘Between the Mountain and the Sea’ by Sharmini Aphrodite (second, Singapore)
‘Vasco’ by Claire Aman (third)

Since 2007 ABR has awarded the Calibre Essay Prize to nineteen writers (the prize was shared in 2008, 2009, 2010, and 2011). Calibre was internationalised in 2015 and as with all our prizes it is judged blind. Since 2010 the Calibre Prize has been won by ten men, eight women, and one non-binary author. The winning authors are listed below. In 2017 ABR introduced a second prize and this has been won by four women and one man. Find out more about the past winners of the Calibre Prize via our Past Winners page

'An die Nachgeborenen: For Those Who Come After' by Elisabeth Holdsworth

'On being Odd' by Lorna Hallahan
'Seeing Truganini' by David Hansen

‘The Death of the Writer' by Dean Biron
'Who Killed Matilda?'by Moira McKinnon

'Body and Soul: Copyright and Law Enforcement in the Age of the Electronic Book' by Matt Rubinstein

'"Because it's your country": Bringing Back the Bones to West Arnhem Land' by Martin Thomas

'Unearthing the Past' by Christine Piper

'Staying with the trouble' by Sophie Cunningham

Since 2005 ABR has awarded the Peter Porter Poetry Prize to twenty writers (the prize was shared in 2011, 2017, and 2019). Ninety-one poems have been shortlisted for the prize. As with all our prizes the Porter Prize is judged blind. Since 2010 ABR has shortlisted forty-five poems by men and forty-six poems by women. Since the prize was internationalised in 2014 we have shortlisted nine writers from overseas. The winners and shortlisted authors are listed below. Find out more about the past winners of the Porter Prize and read their poems via our Past Winners page.

'(for the siblings)' by Kevin Gillam
'T/here' by Judith Bishop
'a full stop reaches the end of its sentence' by Nathan Shepherdson
'Danger: Lantana' by Ross Clark (winner)
'The Window' by Brenda Walker

'Tailings' by Amanda Joy (winner),
'... a passing shower?' by Dan Disney
'Prelude to a Voice' by Anne Elvey
'Rage to Order' by Lisa Gluskin Stonestreet (USA)
'Lament for "Cape" Kennedy' by Campbell Thomson.

‘The Vernal Equinox Story’ by Danielle Blau (USA)
‘Would You Rather’ by Y.S. Lee (Canada)
‘bila, a river cycle’ by Jazz Money
‘A Poetics of Fo(u)rgetting’ Sara M. Saleh (winner)
‘before dawn, with the street lamp’s beam across your face’ by Raisa Tolchinsky (USA)

From Prize to Publication

Many past ABR prize shortlisted entrants have gone on to publish full-length works (novels, short story collections, films etc) based on, or including, their shortlisted or winning works. We have listed some of these below.

Between 2016 and 2018 ABR published nearly four hundred poems by eighty poets as part of States of Poetry, a federally arranged poetry anthology supported by Copyright Agency Limited that also included podcasts. Anthologies were published by poets from New South Wales, Victoria, Western Australia, Tasmania, Queensland and the ACT. These anthologies are all open access. The poets and state editors are listed below.

The statistics listed above are correct as at July 2021. The information on this page will continue to be updated and expanded over time.