I have been looking at the world through tartan frames recently, thanks to the current exhibition ‘For Auld Lang Syne: Images of Scottish Australia from First Fleet to Federation’ and its accompanying catalogue. Actually, to call it a catalogue doesn’t do it justice; its 330 pages ransack dozens of different angles of the Caledonian experience, with essays by its curators, Alison Inglis and Patricia Tryon Macdonald, the Art Gallery of Ballarat’s director Gordon Morrison, and a dozen others.

Ballarat (which I have always thought of as a predominantly Irish town) has gone all highland-flingy over the show; a new plaid for the city has been specially commissioned to coincide with the event, in grey, blue, and gold, and Prince Charles, in his capacity as Great Steward of Scotland, has written the catalogue’s foreword, in which he laments not being able to come over, and describes the early illustrators of flora and fauna as artists, scientists, and explorers all in one.

‘There are few more impressive sights in the world than a Scotsman on the make,’ wrote J. M. Barrie, and this is an exhibition about history’s winners. It’s a salutary point to remember, as the Scots in Scotland heatedly debate whether to vote for independence or stay attached to England, Wales, and Northern Ireland (and the European Union) when they go to the polls in September. Despite being put-upon and exploited at home by the colonising Sassenachs (if that is your view) in the British colonies, they were part of the Übermensch, cutting a swathe in every British possession starting with the Americas.

‘Ballarat has gone all highland-flingy over the show ... ’

As the exhibition reveals, the Scots who arrived in droves were far better educated than their knock-kneed, maggoty English contemporaries; about seventy-five per cent could read and write, and only three per cent were convicts; Scottish judges regarded transportation as equivalent to a death sentence and wouldn’t mete it out for minor offences.

The immigrants also had a sharp sense of what they’d come for: a better society with fairer laws, lots of land, and a chance to rule the roost. From the McDonnell Ranges to the Murray, they have claimed and named mountains and rivers and half the highways bear the Caledonian brand from the macadam on the surface to the names – Stuart, Sturt, and Hume – on the signposts. Twenty-five suburbs of Melbourne bear Scottish names (there’s a free can of Irn Bru for those who can list them without recourse to Melways or the Internet) and the Scots lay claim to Freddo Frogs, Tim Tams, the first vineyards, and most of the Constitution. 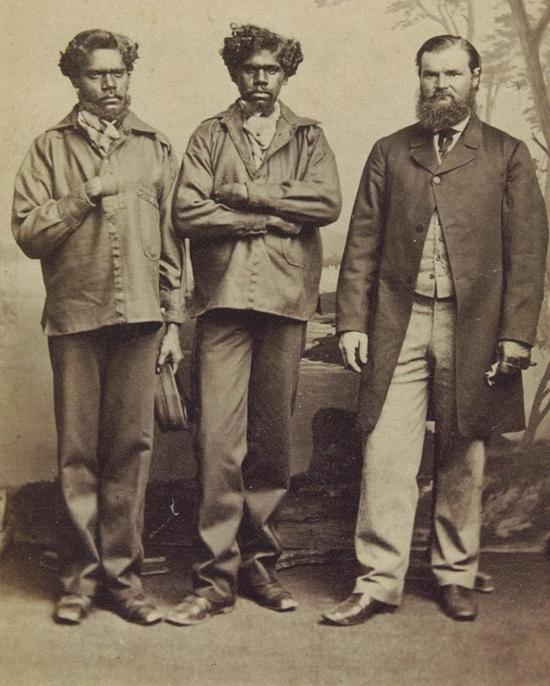 Both exhibition and catalogue are full of interesting nuggets; that New South Wales Governor Lachlan Macquarie ruled like a laird and had his own bard (and also has seventy-seven places or geological features named after him); that one of the earliest wombats sent back for taxidermy was mistakenly stuffed in the aggressively upright pose of a grizzly bear; and that it’s possible to carve black shiny portrait busts from kerosene shale.

John Glover painted the newly arrived highlanders in habitat similar to the Aborigines they were about to dispossess; gathered in a Tasmanian dell of glen-like mien, a group of men and women in tartan shawls huddle round a small fire waiting for a charred wallaby supper.

There are dozens of other paintings and objects – as exhibitions go, it’s the full mince, neaps, and tatties – and some are better than others. I was taken by an 1846 portrait of a solid little boy in tartan called Alexander Sinclair, but the label rather snootily dismissed the artist, Joseph Backler, as only moderately talented and catering to an ambitious artisanal class. 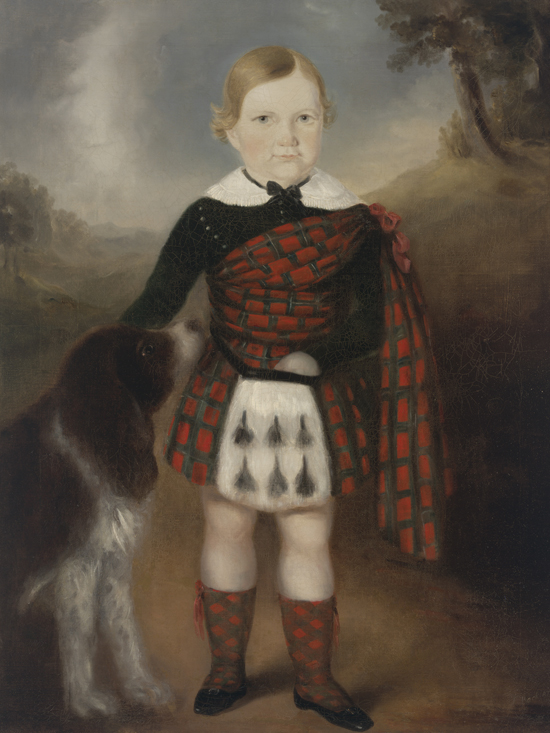 I doubt the curator ever envisaged the scenario I encountered when, turning to the kind-looking, quiet woman standing next to me, I said how much I liked it, despite the label. ‘Yes,’ she said ‘and I’m quite moved because Joseph Backler was my ancestor and this is the first painting of his I’ve ever seen.’

For Auld Lang Syne is at the Art Gallery of Ballarat until 27 July.