On Borrowed Time by Robert Manne 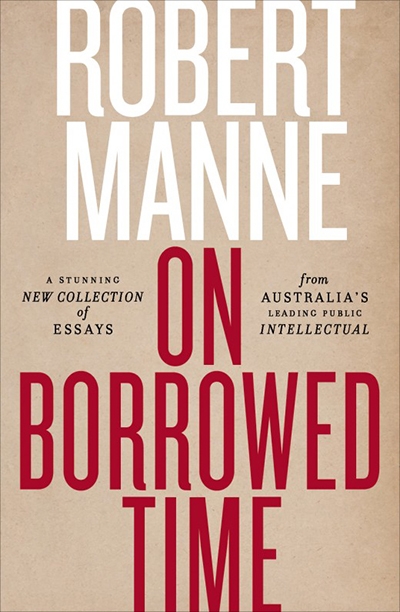 By now, the Robert Manne essay is a well-established form – four decades at the centre of public life will do that. Whatever the topic, his pieces tend to possess certain qualities: an almost lawyerly emphasis on fact and argument over style and rhetoric; a professor’s sympathy for the world of ideas over the muck ...

The Mind of the Islamic State by Robert Manne 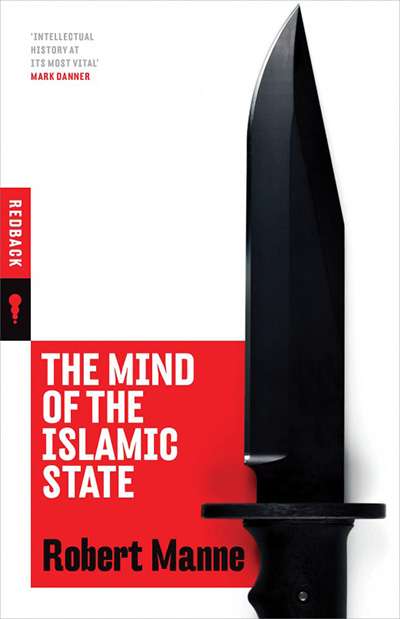 One of the many contradictions of Islamic State, as exposed in Robert Manne’s latest work, is that a mob seemingly dedicated to deeds rather than words is in fact logocratic. For all of their murderous antipathy towards the People of the Book, Islamic State has relied not on speeches or policy platforms, but on a succession of books.

Bad News: Murdoch’s Australian and the Shaping of the Nation (Quarterly Essay 43) by Robert Manne 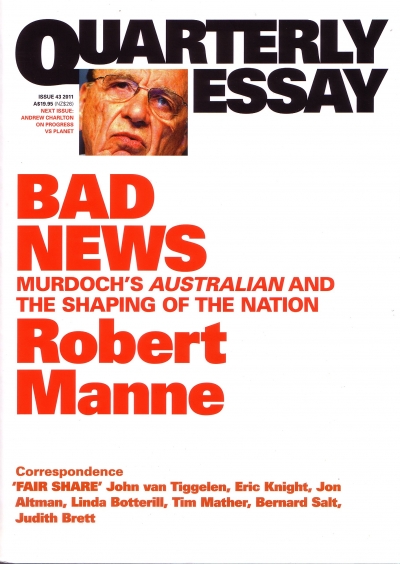 Were I Editor in Chief of The Australian for a day, the first thing I would do is can the ‘Cut and Paste’ section on the Letters page. Its schoolyard bullying of the fools and knaves idiotic enough to oppose the paper’s line – usual suspects include Fairfax journalists, the ABC, Greens politicians, Tim Flannery, and Robert Manne – lies at the heart of what stops The Australian from being a great newspaper. A favourite game is quoting a commentator saying discordant things at different times. As an argument, this is right up there with great moments in adolescent wit like, ‘You said Chanelle was a slag last week, and now you are going out with her!’

Sending Them Home: Refugees and the new politics of indifference (Quarterly Essay 13) by Robert Manne (with David Corlett) 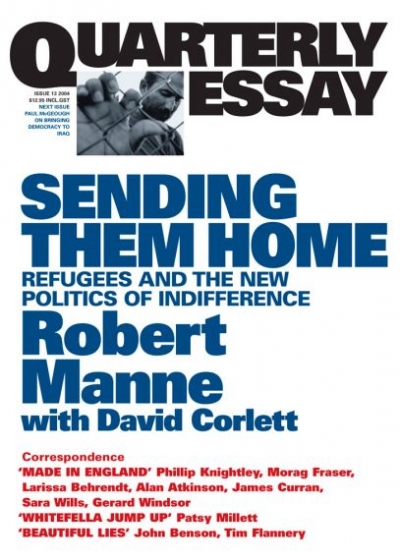 Some time before the sun set on the British empire, ‘British justice’ took on an ironic meaning. In the colonies, we knew it was a charade, like that doled out to ‘Breaker’ Morant during the Boer War. The dice are loaded in favour of a prosecution that nevertheless insists on carrying out its cold-blooded retribution in an apparently value-free legalese, thus preserving the self-righteousness of the empire and tormenting the condemned. Yet, as Robert Manne and David Corlett make clear in this latest Quarterly Essay, the larrikin land of Australia can now, through its treatment of asylum seekers, fairly be said to lead the world in the practice of traditional British justice. 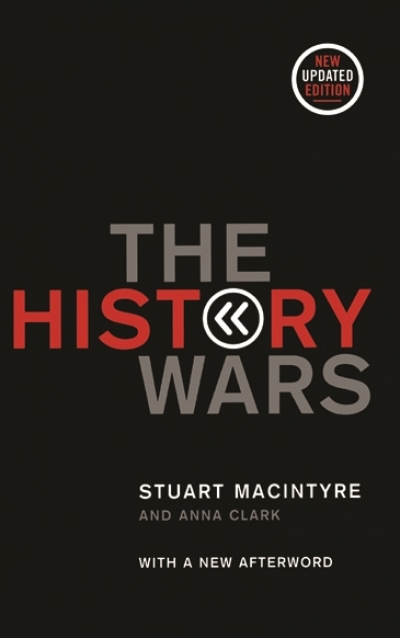 Towards the end of his informative introduction, Robert Manne, the editor of Whitewash: On Keith Windschuttle’s fabrication of Aboriginal history, outlines the collective intention of the book’s nineteen contributors. He refers to Windschuttle’s The Fabrication of Aboriginal History (2002), a revisionist text dealing with early colonial history and violence in nineteenth-century Tasmania, as ‘so ignorant, so polemical and so pitiless a book’ ...

Common Ground: Issues that should bind and not divide us by Malcolm Fraser 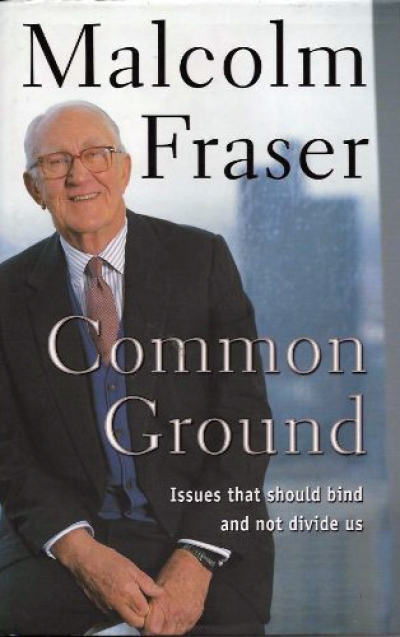 When Malcom Fraser was prime minister, he was generally thought of as a hard and ruthless man of the right. In part this was because of the role he played in the removal of Gough Whitlam; in part because of his fiscal prudence; in part because of his orthodox Cold War foreign policy. Following his defeat in 1983, an alternative picture of Fraser gradually emerged. Under Labor, Australia embarked upon a program of economic rationalist reform. For his failure to anticipate this programme – to be wise or, as some would say, unwise before the event – Fraser was caricatured, especially by his former political friends, as a do-nothing prime minister. His time in office was ridiculed as Seven Wasted Years. After 1996 Fraser became one of the most influential critics of John Howard’s new brand of populist conservatism. The portrait of him was once more redrawn. The left saw him as a principled humanitarian; the right as an incorrigible Wet.

In Denial: The Stolen Generations and the Right (Quarterly Essay 1) by Robert Manne 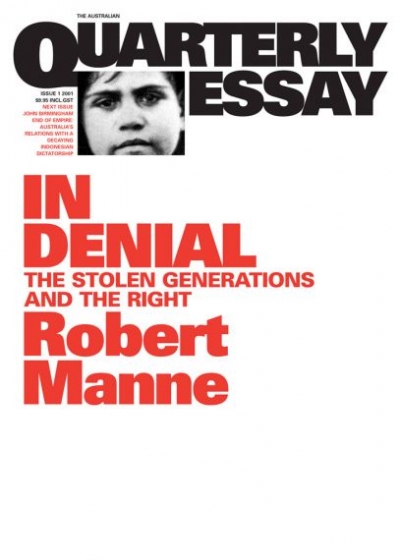 Much current debate on crucial issues facing Australia – the economy, race relations, foreign affairs, for example – is conducted in the opinion pages of metropolitan daily newspapers. And ‘opinion’ pages they now are – with a vengeance. It is a symptom of the times that opinion-page editors have less and less recourse to disinterested authorities ... 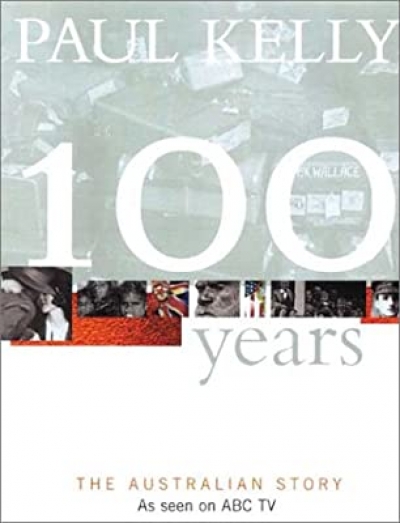 Paul Kelly is the most influential Australian political journalist of the past twenty-five years. There was a time when Kelly was merely the most perceptive chronicler of the nation’s political life, a worthy successor to Alan Reid. With the publication of his most celebrated book, The End of Certainty, he became something rather different: a highly significant player on the national stage. The End of Certainty told the story of party politics in the 1980s. More importantly, it insinuated a powerful argument in favour of the dismantling of the distinctive interventionist economic arrangements that had been established after Federation: protectionism, centralised industrial arbitration and financial regulation.

Ramona Koval interviews Robert Manne about 'The Culture of Forgetting'

Ramona Koval asked Robert Manne what his version of the strange story of Helen Demidenko might be.

Robert Manne: Well there was once, I think, a very strange young Australian woman of English parents, who, for reasons that we don’t understand decided to identify with Ukrainian war criminals. She decided that the Jews had got control of the history of the Holocaust and that a terrible story of what happened to Ukrainians at the hands of Jews had not been told. So she decided to take the name Demidenko because she read in a book that Demidenko was a Ukrainian who had been at Babi Yar where thirty-three thousand Jews were killed. She identified so strongly that she took the name Demidenko and wrote a high school essay in which she imagined what it would be like to be Ivan the Terrible, probably the most monstrous figure that emerges from the killings at Treblinka or at any other extermination camp. She decided to write a novel in which she would adopt the identity, imagining herself to be this daughter of a Ukrainian war criminal, with an uncle who served at Treblinka. And so she wrote a novel. Amazingly enough, not only was her novel published but it won a major award. It so convinced the literary community of its authenticity that it was regarded in 1995 as the best literary work published in the country.