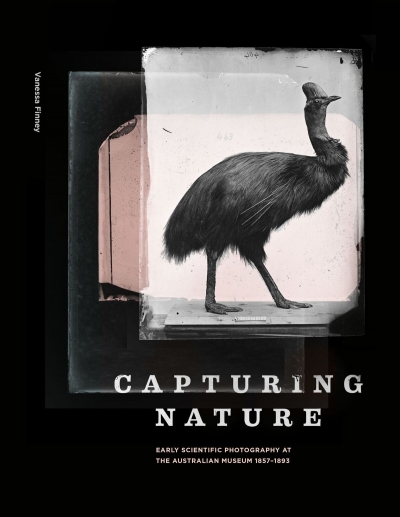 The photographic resources of museums and their archives have emerged as key sources for studying the natural world and human cultures, particularly as those studies have widened to include the techniques and modus operandi of scientists and anthropologists themselves. Their notebooks and field equipment, ranging from collecting jars to cameras, are now routinely exhibited and published together with specimens, artefacts, sketches, and photographs. But while an increasing number of publications and exhibitions draw upon museum archives in this way, less attention has been paid to the ways in which photography entered museum practice and ultimately became one of its vital methodologies. In that sense, Vanessa Finney’s Capturing Nature is a pioneering work, at least in the Australian context.

Through her long-term role as archivist at Sydney’s Australian Museum, Finney has not only become familiar with its impressive collection of photographs taken ‘in the field’, but has also been able to concentrate upon those images taken within the museum, from the 1860s onward. As she outlines in this beautifully written and illustrated volume, the Australian Museum was itself a pioneer in integrating photographic documentation into its documentary practice. Other Australian museums were late adopters; partly through lack of funding, but as Finney makes clear, the personalities and abilities of naturalist and curator Gerard Krefft and of preparator and photographer Henry Barnes were decisive influences. Krefft joined the Australian Museum in 1861, having already observed the British Museum’s use of photography in London during 1858 and having participated in the 1856–57 Blandowski expedition to the Murray and Darling Rivers, one of the first Australian expeditions to deploy photography.

Philip Jones is a historian and museum ethnographer specialising in the historical trajectories of objects and images across cultural boundaries. Based at the South Australian Museum, he is writing histories of the Yuendumu Men’s Museum and of the artist-naturalist George French Angas.

Philip Jones is a historian and museum ethnographer specialising in the historical trajectories of objects and images across cultural boundaries. Based at the South Australian Museum, he is writing histories of the Yuendumu Men’s Museum and of the artist-naturalist George French Angas.