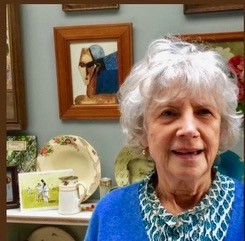 I put an advertisement in the London Times newspaper in 1964 or thereabouts, which stated ‘Australian BA, typing, wants job in publishing’. I got three offers and accepted one, which was being a menial for a sponsored book editor at Hutchinson’s. But my real pathway was my mother and father, both great readers; I grew up surrounded by books.

Sometimes, but as time went by I had editors who worked with me. I did the first read, made notes, and the final editorial procedure passed to one of them.

I have not been a publisher since 1995. The number was very different, each year, and in each of the companies I managed. At Virago, we started out with about ten titles, but ultimately I think published about fifty titles a year. At Chatto & Windus we published less each year over the years I was there (1982–95): cutting down the midlist started many decades ago. Now, I am told the number is even less. But in my day it was about thirty new books a year, I think.

Mary Chamberlain’s Fenwomen: A portrait of women in an English village, in 1975.

Someone anxious to say something to a reader, hopefully something they want to hear. Good writing, great writing, great use of words and imagination. Wit was always a way to my heart, a gift for storytelling – narrative – and a humanity above and beyond all that. NOT always found.

Them. I loved most of them, and their love of words and books. The greatest challenge were the disagreeable egomaniacs, whom nothing could please. Next came the conglomeration of publishing and always having to cut staff and talk to the accountants of new international conglomerates and other pontificators, as book publishing changed entirely in the 1980s and 1990s.

Yes, I write, and no, being a publisher doesn’t inform it. They feel quite separate endeavours to me. Being a publisher, you are the servant – a proud servant, but one all the same – of writers. Writing yourself uses an entirely different part of one’s brain and heart.

I can’t imagine so. Why should it be?

Rapid sales. They make up for everything, and usually incorporate the other three.

As good as it ever was, perhaps better, because there are so many new methods of using the written word. Financial rewards for writers will always be a problem. Many good writers may have to use new methods of publishing their work and not depend only on traditional book publishers. This is happening already.

Carmen Callil, who lives in London, is an Australian writer, publisher, and critic. She founded Virago Press in 1972 and was managing director of Chatto & Windus from 1982 to 1994. She was a committee member for the Man Booker Prize for five years, and was made a Dame of the British Empire for her services to literature in 2017. Her books include The Modern Library: The best 200 novels in English since 1950 (1999, with Colm Tóibín) and Bad Faith: A forgotten history of family and fatherland (2006).