Welcome to our annual Fiction issue! In this issue you will find the three shortlisted stories from the ABR Elizabeth Jolley Short Story Prize, as well as other features on fiction, including ten writers nominating their favourite story collections, and Maria Takolander and Mary Cunnane on short fiction and the art of pitching, respectively. Enjoy those cupcakes!

You will also find additional reviews of major new fiction releases, as well as our standard range of reviews and features. Thanks to the brilliant Judy Green for the effervescent literary dandelion, which takes pride of place on our cover spread. 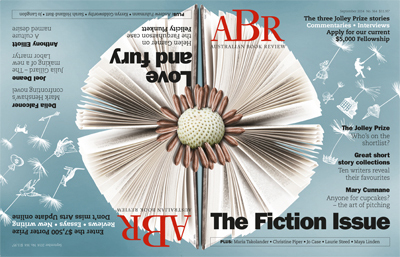 This year we received almost 1,300 entries in the Jolley Prize. We were delighted to see evidence of the Jolley Prize’s growing international profile; stories arrived from twenty-four other countries. Entries from the United Kingdom, the United States, and New Zealand weren’t entirely unexpected, but we were particularly pleased to receive stories from countries where the Jolley Prize may not have previously had such a high profile (among them the Cayman Islands, the Maldives, Uganda, and Nepal). As word spreads, we look forward to receiving stories from an increasingly diverse and international pool of writers. 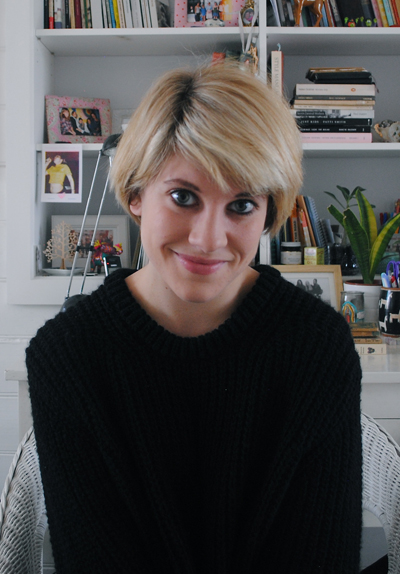 The shortlist for the 2014 Jolley Prize was announced at a lively event at the Melbourne Writers Festival on August 30. The judges – Patrick Allington, Cassandra Atherton, and Amy Baillieu – shortlisted three stories by Jennifer Down, Cate Kennedy, and Faith Oxenbridge. We have much pleasure in publishing them in this special issue.

After readings from the three stories, Jennifer Down was named the winner for ‘Aokigahara’. The judges described ‘Aokigahara’ as a ‘beautifully controlled story with subtle understated power’. New Zealander Faith Oxenbridge took second place for ‘The Art of Life’, and Cate Kennedy third for ‘Doisneau’s Kiss’.

The judges also highly commended two stories which we will publish in coming months: Gregory Day’s ‘The 900s Have Moved’ and ‘The Great Dying’ by American writer Larry O’Connor.

To celebrate the Jolley Prize (and to find out which of the three shortlisted stories our readers like most), we are also presenting the Readers’ Choice Award. You have until October 20 (5 pm) to nominate your favourite story. To do so, simply email us with the title of the story you wish to nominate, along with your full name, address, and telephone number: This email address is being protected from spambots. You need JavaScript enabled to view it.

We have some special prizes for three lucky voters. One will receive twenty-five Text Classics, courtesy of Text Publishing. Two other voters will receive two-year complimentary subscriptions to ABR Online.

Conscious that features on publishing and writing always prove highly popular with our readers, we have added a new feature on key figures in the publishing industry. Cassandra Atherton interviews Ben Ball, Publishing Director of Penguin Australia. Every few months we will run another of these Q&As.

Dr Atherton is a seasoned interviewer. Her book In So Many Words: Interviews with Writers, Scholars and Intellectuals (Australian Scholarly Publishing, 2013) contains interviews with such luminaries as Harold Bloom and Camille Paglia. Gillian Dooley reviewed it in our February 2014 issue.

Reader surveys help us to assess reactions to the magazine and to make improvements. Last year’s survey of the print edition was instructive, and – always a relief – overwhelmingly positive. Now we are keen to find out readers’ views of our digital platforms – the newly refurbished ABR website and ABR Online (the digital, subscription-only version of the magazine).

Please complete our online survey. It has twenty-five questions and will only take about five minutes. The survey is anonymous – unless you want to be in the running to win a five-year subscription to ABR Online, in which case we will need your email address.

The website now features a complete list of everyone who has written for the second series of ABR – that is, since it was revived in 1978. This feature also lists all the issues in which they have appeared. Almost 3,000 writers, critics, scholars, and public figures have written for us since 1978. They include prime ministers, prime ministers’ wives, cabinet members, Nobel Laureates, and Miles Franklin Award winners,

Here are just some of the contributors Advances did not expect to find on the list: Neil Armfield (issue no. 99), Noel Counihan (70), John Gorton, whose sole appearance (46) has been eclipsed by those of his granddaughter, Lisa Gorton (forty contributions, nos 245–359), Michelle Grattan (118), Christopher Koch (173), and Hal Porter (14). Readers and students will find the master list an informative way to discover what authors such as Jessica Anderson, Helen Garner, and David Malouf have written for us – and when.

We are presently compiling a similar list of contributors to the first series of ABR (1961–74).

The Peter Porter Poetry Prize – the most alliterative prize in the world – honours the life and work of the great Australian poet (1929–2010), an esteemed contributor to ABR (twenty-three appearances, nos 75–322).

We now welcome entries for the eleventh Porter Prize, which closes on 15 December 2014. This year we have again increased the prize money. The winner will receive $5,000; $500 will go to each of the other shortlisted poets. The poet–judges this year are Lisa Gorton (Poetry Editor, ABR), Paul Kane (Vassar College), and Peter Pose (Editor, ABR).

The Porter Prize – like our other two prizes (Jolley and Calibre) – is now open to anyone writing in English, irrespective of where they live. We encourage entrants to use our online entry system. It is simpler, quicker, and virtually costless; and infinitely preferable from our administrative point of view. Before entering, interested poets should peruse our Terms and Conditions – plus the Frequently Asked Questions. 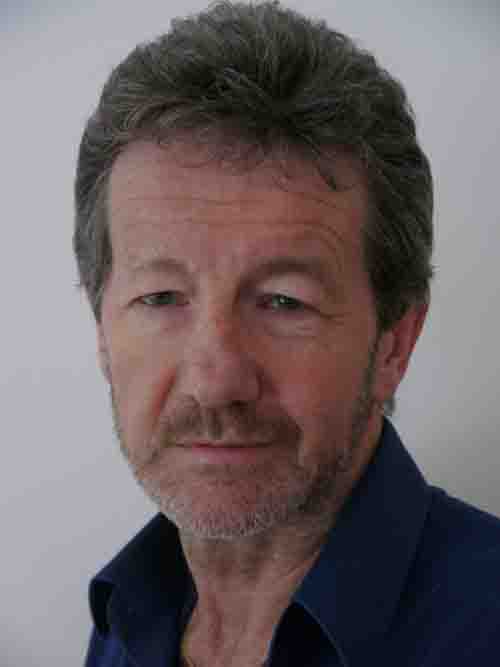 Do criticism and reviewing have a future? Some seem to think not, but Stefan Collini – distinguished author, Professor of English Literature and Intellectual History at the University of Cambridge, and long-time contributor to LRB and TLS – disagrees and believes that there has always been a plurality of reading publics and that good criticism still finds an audience.

Professor Collini will deliver a free public lecture on Wednesday, 17 September. This will be held at the University of Melbourne (6 pm, The Linkway, Medley Building). ABR is pleased to be co-presenting this lecture with the University’s School of Culture and Communication.

Professor Glyn Davis – vice-chancellor of the University of Melbourne – reviewed Stefan Collini’s most recent book, What Are Universities For?