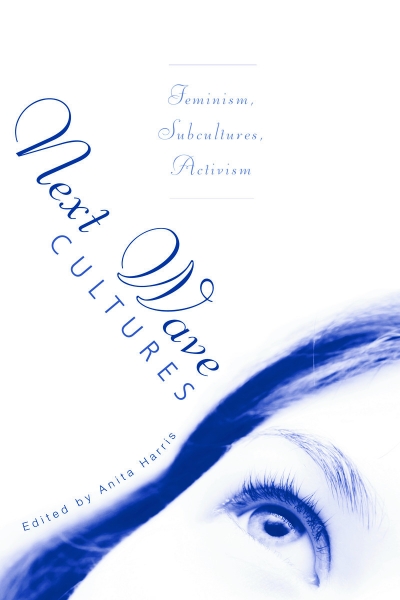 The familiar triumvirate of globalisation, advanced technology and consumerism has altered feminist, activist and subcultural practices so dramatically that their originators have trouble recognising them, and academics are racing to keep up. Next Wave Cultures acknowledges and embraces these upheavals in women’s social and political action. Anita Harris has selected a motley group of eleven essays that cover a diverse range of lifestyles, identities, communities and activities.

Slightly dated topics are revitalised in discussions of international zine networks, culture jamming, female surfers, adolescent sexuality, girls’ street culture, hip-hop ‘gangstressism’ and Riot Grrl, while the cutting edge is navigated by essays on Internet ‘cam girls’, an empowered group of disabled film-makers, and Reflections, a magazine run by young Muslim women. The volume concludes with two essays, one co-authored by Harris, which provide a general view of recent forms of young women’s activism in Australia and the United Kingdom.

With their vast differences in tone, writing style and content, the leap between essays can be daunting; however, a blanket style would have stifled this collection. The downside to Harris’s approach is that not all of the essays are of the same standard or purpose. Academic arguments, cluttered with jargon, are mingled with promotions of organisations, ideas and publications. Too often, problematic elements, such as the horrors some women have experienced under Sharia law, are glossed over or ignored.

Also puzzling is Harris’s relatively narrow focus on the Internet. Of course, it would be impossible for anyone fully to chart the vibrant chaos of today’s female-dominated endeavours. To her credit, Harris’s collection has a broad and intriguing scope, and is enjoyable and thought-provoking, even at its most uneven and biased.

Kate Goldsworthy is a Melbourne editor.

Kate Goldsworthy is a Melbourne editor.