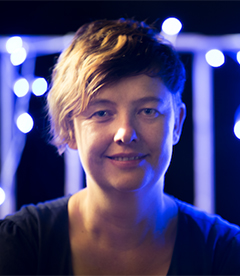 Miranda Lello is a Canberra poet and performer whose début poetry collection, A Song, The World To Come, was published in March 2017 by Recent Work Press. It took thirty-five years to write, and Miranda launched it on her birthday under a tree outside the National Film and Sound Archive, one of the places she loves most in Canberra. Miranda has performed regularly around Canberra over the past twelve years, including at The Salt Room, Canberra Slambouree, BAD!SLAM!NO!BISCUIT!, and at Smith’s Alternative. In 2011 she was a finalist in the National Poetry Slam. She has been a featured performer at the Noted Festival and has had multiple poems shortlisted for the University of Canberra Vice-Chancellor’s International Poetry Prize. She has had poems published in Axon: Creative Explorations, fourW, and the now long-gone Canberra journals Block and Burley.

'Poetry as form: I have always thought that poetry is broken, and that is what I love about it. In a poem we always fail to capture the thought, the moment, the feeling that we are trying to write, but in the spaces left by that failure the reader connects with the poet, fills the spaces with their feelings. So I try to write in a way that gestures to that failure – halts and stumbles.

Poetry as content: What can we fill a poem with but our lives, and what are our lives but everything? My poetry is rooted in the places I live and visit, most notably Canberra and its suburban landscape, the feeling of not being at the centre of things. My poetry is also shaped around the art I love – poetry and film in particular. But I think poetry must gesture beyond ourselves, and beyond itself and back to the world that creates it. A poem should lead back to life. The everyday life that is so terrible and beautiful, so connected now across the world.'

A trip to the library

New Years Day by the river