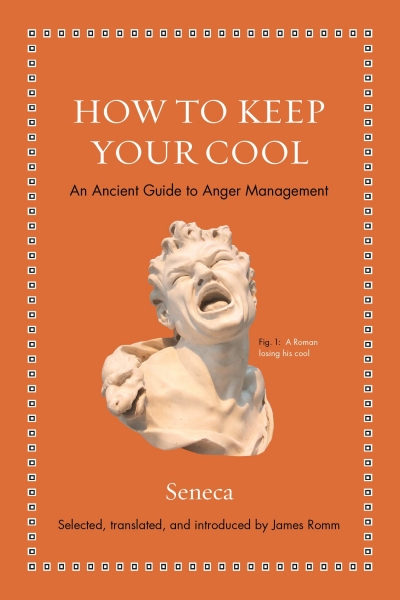 ‘Serenity now,’ repeated Seinfeld’s Frank Costanza whenever his blood pressure got too high. His doctor recommended this anger-management technique, but he might as well have got it from Seneca, whose De Ira (Of Anger) James Romm has edited, translated, and released as How To Keep Your Cool. Seneca’s credentials are mixed: as a senator, he probably saw a fair bit of Caligula’s anger; as an exile, he had plenty of time for introspection; as a tutor, he saw his student Nero committ matricide. As Lloyd Braun said, ‘Serenity now; insanity later.’

To be fair, Seneca’s advice is more nuanced than repeating mantras. He acknowledges that we have involuntary reactions, but he stresses that emotions usurp our judgement only if we let them. As Romm translates: ‘just as bodies in freefall have no power over themselves and cannot resist or slow their descent … so the mind, if it launches itself into anger, or love, or the other emotions, has no chance to check its impetus’. Emotions are, by definition, irrational; you cannot have a moderate emotion any more than you can have moderate insanity. Reject them as soon as they appear: stay cool.

A public man, Seneca was aware that some situations demand a response. Should one do nothing if he sees his father killed or his mother raped? Seneca replies that the good man will avenge his parents because it’s his duty, not because he’s aggrieved (quia oportet, non quia dolet). This is shocking but not novel: Seneca was working within the Stoic tradition, which states that the ideal man has no emotions. Fortunately, he knows we can’t purge emotions. We can, however, prevent them from controlling us.

When we readily judge that someone has wronged us, anger is the result. Avoid this judgement by thinking of the times you’ve done something wrong. Don’t believe everything you hear. Don’t ask too many questions. Don’t live in luxury: ‘the mind must be roughly treated so that it does not feel any blows except the heavy ones’. The best cure for anger is delay (mora): would you hastily condemn a friend? So far, so good – but then Seneca encourages a disturbing lenience:

[the man who wronged you] was ordered to do it: who but an unfair man becomes angry at what’s necessary? He had been hurt: it’s no injury if you suffer what you did to him first. He’s a judge: you would do better to trust his opinion than your own. He’s a king: if you’re guilty and he punishes you, yield to justice; if you’re innocent, yield to your fate.