The original French version of Waiting for Godot was written in Paris between October 1948 and January 1949. This was a time of mass migration in Europe, when a flood of displaced humanity washed across the continent. It was a time of refugees, exiles, immigrants, fugitives, and transients. France settled more than 38,000 people who, for one reason or another, could not be repatriated. Australia took more than 180,000.

In 1953, there were still some 250,000 refugees awaiting resettlement in camps across Europe. These were the human leavings, the people deemed surplus to a world intent on reconstruction and forgetting: the elderly and the infirm, the crippled and the insane.

In January of that year, Godot premièred at the Théâtre de Babylone in the 7th arrondissement of Paris, across the road from the Lutetia, a luxury hotel that doubled as a refugee centre at the end of the war.

Of course, Beckett’s comic tale of two derelicts waiting vainly for the arrival of a mysterious stranger who will surely come today, or the day after, is not reducible to a bleakly sentimental refugee fantasy or metaphysical reflection on the conditions of displacement and abandonment. And yet, as a point of view on the play, it seems not only valid but indeed essential.

It is not, however, a point of view that seems to inform this new Wit’s End production. Instead, this is a frolic for auld lang syne, a celebration of old acquaintances and a meditation on reunion. This is announced in the first minutes of this production when Vladimir says cheerfully: ‘On the other hand what’s the good of losing heart now, that’s what I say. We should have thought of it a million years ago, in the seventies.’

It’s a minor change to the script – from the 1890s to the 1970s – but it points to the motivating impulse of the production and makes explicit the link to autobiographical experience. In 1976, John Jacobs and William Henderson played Vladimir and Estragon respectively in James McCaughey’s Pram Factory production. Here, forty-one years later, they are reprising the roles in a new version directed by Henderson and Shona Innes. The experienced cast also includes Tom Considine as a rather saturnine Lucky and Richard Bligh as a booming, ruddy-faced Pozzo. The role of the child anti-herald, always announcing the non-appearance of Godot, is shared between Jean and Sean Innes.

It is a fine-looking production, but part of me wonders if its significance is only accessible to friends and fellow travellers, to comrade survivors of the decade of wine flagons and protest marches. In any case, it is not accessible to me. This is a decent version of one of the most durable plays of the twentieth century; what else to say except that they are all older now than they were. Time, as Pozzo assures us, has clearly not stopped.

This is the sort of production where the hats keep falling off at inopportune moments and need to be retrieved in order to get through the next bit of business; the sort of production where the performers are forever tangling themselves in Pozzo’s rope as they cross the stage; the sort where the bright nylon band of Lucky’s underwear shows above the waist of his ragged trousers. The room smells of fresh paint, and the stage floor squeaks like a basket of guinea pig pups. And yet it still works – well enough. 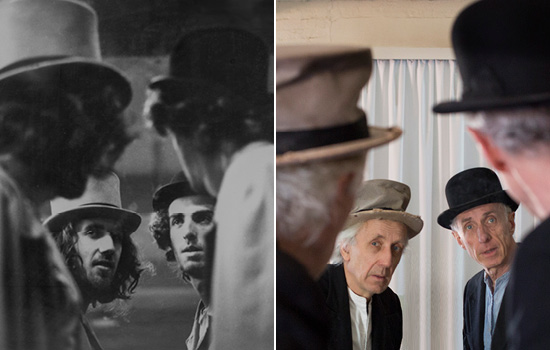 The highlight is designer Julie Renton's eye-catching cyclorama backdrop. A clear, graded, late-evening sky of purples and blues and oranges encloses the performance space in a semi-circle, with the horizon a mere streak at floor level. The lone tree, which prompts the two vagrants to think of suicide, is negatively defined, a hollow cut out from the colours of the sky. Niklas Pajanti’s soft lighting suggests the all but imperceptible approach of night.

Henderson and Jacobs are relatively straightforward and unaffected in their depictions. There is little caricature or trampish colouration, and the rhythm is relaxed, though not exactly fluent. It is all made to seem as ordinary as possible. The performers play to the audience, and there is a fair bit of friendly interaction. Again, I wonder how much of this performance is really a kind of collective reflection on life in the little theatres of Melbourne.

As I looked into the empty space that represented the tree, I couldn’t help but think that all this was the merest outline of the real thing, and that what actually mattered at this moment was elsewhere. Perhaps that is the most Australian thing – the most parochial thing – about this production of a modern classic. On the night I attended, almost four thousand kilometres away, members of the Royal Papua New Guinea Constabulary were moving the remaining 328 asylum seekers at the decommissioned Manus Island detention centre to new camps, where, no doubt, the waiting will continue.

Wits' End, which is a new incarnation of Henderson’s Eleventh Hour Theatre, is based in the old Mission Hall at 170 Leicester Street, Fitzroy. It’s a fine building and a cosy theatre space. The streets around the theatre are pleasant and leafy. There was a storm during the performance, but by the time we emerged the streets were almost dry. It was a pleasant evening for a walk.