Louis Nowra’s latest play, his first in ten years because apparently and appallingly no major company in Australia has asked him for one, is the third in his semi-autobiographical Lewis trilogy. In Summer of the Aliens (1992), the young Lewis, growing up in housing-commission Melbourne, has to find a way to come to terms with the unpredictable adults who surround him and to deal with his feelings for his coevals. Così (1992) finds a slightly older Lewis attempting to introduce Mozart into the lives of an even more extreme group in a mental hospital, while staggering through a dying relationship. In This Much Is True, a more mature Lewis, now a writer recuperating from a divorce, as much spectator as participant, hangs out in the bar of The Rising Sun, a Woolloomooloo pub not entirely dissimilar to The Old Fitzroy in which the play is being presented. This Much Is True can also be seen as the third piece in another Nowra trilogy, an addendum to his recent love letters to the neighbourhood; King’s Cross (2013) and Woolloomooloo (2017).

As Nowra has told us, fleeing from the tide of gentrification engulfing the Cross, to his delight and his dog Coco’s gratification he discovered The Old Fitzroy and its ever-evolving cast of refugees from conventional Sydney. In This Much Is True, with due regard for theatrical licence, he introduces us to a few of the characters he found there.

Although we are confronted with a group of social outcasts at a low ebb in their lives, the mood of the play could not be further from the gloom and doom of Gorky’s Lower Depths or O’Neill’s The Iceman Cometh. To call this group misfits is a pat and banal description. After all, into what is it that they are not fitting? The café society up the hill in Potts Point? The leafy suburbs from which at least one of them has escaped? They are, in whatever haphazard and desperate way, living life on their own terms. Never judgmental, wryly observant, Nowra presents his cast.

There’s Cass, the fixer, whose constant accounts of past glories are greeted by the others with such benign skepticism that they are mildly surprised when they discover that a famous female wrestler he claims to have managed actually existed; Malcolm, a transplanted Pom and failing debt collector, a seething mass of barely controlled rage; Wesley, previously a successful business and family man, now at the mercy of his mental demons; Venus, a once-famous drag artiste living on her memories; ‘Chemical’ Clarrie, a chemist of genius, whose ability to concoct drugs of the utmost purity has him regularly abducted by both the bikie and Lebanese gangs. Rhys, a charming blow-in, quickly becomes part of the group. Serving the endless rounds of drinks is Gretel, a sweet-natured daughter of hippies, still trying to work out what she wants to be. 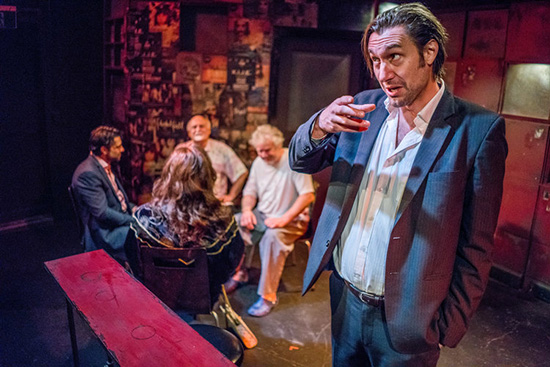 To say that the play’s structure is loose is an understatement, but its formlessness mirrors that of the lives of its characters. Things happen, there’s death, violence, Clarrie gets abducted again, but This Much Is True is essentially an ensemble portrait. Nowra manages, as he did with Così, to pull us into the lives of these people and to have us empathise with them.

Toby Schmitz’s long association with the Old Fitz gives him an understanding of the play which makes him its perfect director. He gets the balance of humour, desperation, and sadness exactly right.

The cast, many of them Old Fitz regulars, is a strong one. Septimus Caton is a quietly attentive Lewis. At one point he supports a drunken and distressed Venus. As he leaves she begs him not to write about the episode. Caton’s expression says it all. It’s too late. Writers are incorrigible. Danny Adcock’s Cass is a hyperactive master of ceremonies. Martin Jacobs’s plummy-voiced, wild-haired Clarrie is a cross between Louis Pasteur and Sir John Falstaff. Ashley Lyons is devastating as the disintegrating Wesley. Robin Goldsworthy as Rhys slides effortlessly into the group. Alan Dukes brings an almost frightening intensity to Malcolm. This is a man you really don’t want to upset. Justin Stewart Cotta is a commanding presence as Venus. He held the audience rapt with Venus’s long reminiscence in the aforementioned scene with Lewis. If Joanna Downing doesn’t make quite as strong an impression as the other actors, it is because Gretel, as a character, is seriously underwritten. Surely even such a docile creature as Gretel would fight back against the constant abuse she gets from Venus. 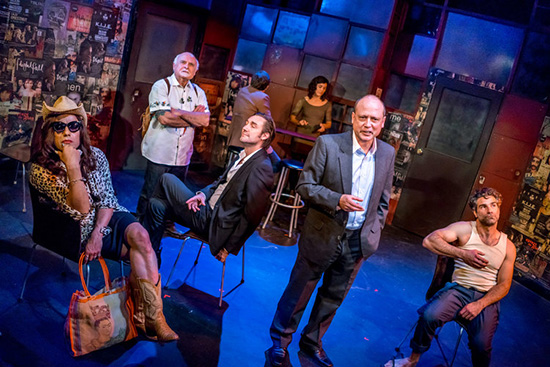 This is, of course, This Much Is True’s first outing, and it will probably be tightened up a bit in the future, but for now it is wonderful to have Louis Nowra writing for the theatre again.

One final irony: on a recent Sunday evening, the cosy, spruced-up Old Fitz, crammed with a mixture of bright young things and seasoned theatregoers, was a beacon of gentrification in the middle of a still pretty rackety area.

This Much Is True (Red Line Productions), written by Louis Nowra and directed by Toby Schmitz, is presented at the Old Fitz Theatre until 12 August 2017. Performance attended: 16 July.

Louis Nowra was Australian Book Review’s Open Page guest in its May 2017 issue.