A History of the World in 100 Objects, from the British Museum at the National Museum of Australia, tells a two-million-year story through works from the collection of the British Museum. It is based on former BM Director Neil MacGregor’s highly successful 2010 BBC Radio series and book of the same name.

The touring version, for logistical reasons, does not have all the same objects. However, it covers the same territory, with a vast range of artefacts from cultures all over the globe. Less ambitious in the period it covers – a mere 130 years – but grander as a display is Versailles: Treasures from the Palace at the National Gallery of Australia. Drawn from the collection of the most celebrated of European palaces, Versailles presents the art, design, architectural and garden patronage of the French monarchs of the second half of the seventeenth and the eighteenth century. Interestingly, Enlightenment ideas not only inspired the birth of the modern museum, but also led to the French Revolution and the end of absolutist rule in France and all that Versailles stands for.

A History of the World spans prehistory to the present day and is arranged chronologically. The first two objects are extraordinary stone hand tools from Tanzania, the older one being nearly two millions years old. The most recent is a Chinese made Solar-powered lamp and charger (2010). In between, there is much to interest and delight. One of the strengths of the exhibition is how it presents familiar and unfamiliar objects in close proximity. The message here is surely that they are all part of a cultural continuum, reinforcing Neil MacGregor's mantra that the BM is a museum for the world. While the individual objects are not necessarily the best of their type (indeed, Australian collections hold finer examples for several) they have been selected to tell a coherent story of what objects reveal to us about culture. Thus, the exhibition goes some way to providing a framework for understanding the role objects play in society. 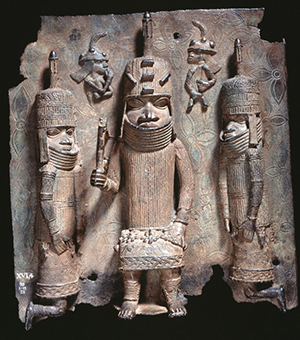 Benin plaque of the Oba with Europeans, 1500-1600 CE (The British Museum)While the exhibition explores ideas and concepts, the selected works do not feel that they have been included to support theories. Instead, it is the works themselves that have led to the ideas and that shape the exhibition. The attractive exhibition book illustrates only one of each type of object: the exhibition is richer, often presenting multiple examples. The Introduction provides general background and deftly contextualises an Egyptian coffin as well as demonstrating how scientific research in the nineteenth century (hieroglyphics) and twenty-first century (CT scans on the mummy) has helped unlock aspects of this ancient object. The texts in the book, while informative, are mostly rather basic; the curious will go to Neil MacGregor’s original.

Two things became apparent to Arts Update. Much of the exhibition is archaeological loot of some form or other, yet there is surprisingly little emphasis on this aspect of the history of the works. Also, after seeing so many rare and beautiful objects from the outset until well into the eighteenth century, those from the nineteenth century onwards were a bit flat, and here the exhibition fizzles. Their stories are interesting, their importance undisputed – witness the HSBC Visa Credit card (2009) from Dubai – but they are often less striking as objects in their own right.

Versailles is impressively displayed, with a grandeur that befits the collection and the three Louis who lived there. It opens with a splendid room and maintains pace throughout, with a generous selection that includes paintings, sculptures, furniture, tapestries, porcelain, and other decorative objects. There is even a walk with fountains in the gardens, the perfect way to enjoy some wonderful garden sculpture in situ. (Here, Arts Update was reminded of Barbra Streisand’s memorable statement about one of her former interior decorating passions: ‘I wanted everything Louis.’)

Several of the paintings and prints are well known to social and cultural historians through illustrations in publications. It was nice to see the originals, such as Nicolas-André Monsiau’s imaginary Louis XVI giving instructions to La Pérouse, 29 June 1785 (1817) and some dining and socialising scenes, even if Michel-Barthélémy Ollivier’s The Prince of Conti’s dinner at the Temple Palace 1766 (1777) is a little worse for wear. The exhibition also includes the famous tapestry after a design by Charles Le Brun, The kings’ visit to the Gobelin factory, 15 October 1667 (1729–34), and a spectacular Savonnerie Carpet (c.1682), one of ninety-three commissioned by Louis XIV for the vast sweep of the Louvre’s Grande Galerie, both worth the entry ticket alone. There is a group of superb impressions of the Lepautre engravings of the outdoor entertainments held at Versailles during the 1670s (excellently covered and contextualised in the Getty Research Institute’s The Edible Monument). They show how, from the beginning, Versailles was all about theatre and spectacle. 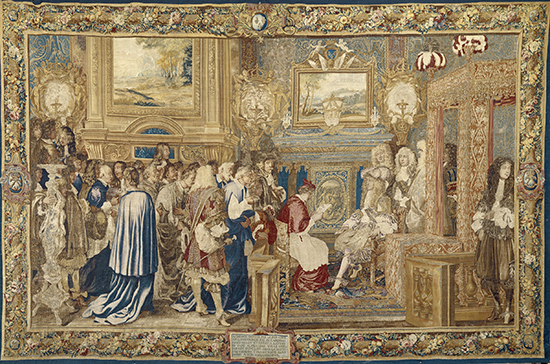 The audience with Cardinal Chigi, 28 July 1664 (photograph by Christophe Fouino, courtesy of the National Gallery of Australia)

It is in these illustrations of the ancien régime, its rulers, their glorification, and their palace that the exhibition excels. We see Louis XIV’s military exploits, the lives of his descendants, wives and families, and views and plans of the château and gardens, accompanied by some most elegant furniture. In this rarefied vision of French royalty we don’t get the unsettling and gritty side of French eighteenth-century painting so evident in Watteau and Chardin. Several of the paintings of famous subjects (all three Louis and Marie-Antoinette) are ‘after’ or ‘studio of’ the original (by Rigaud, Carriera, Duplessis, Vigée Le Brun), and they certainly they look it. This, and other works by lesser artists, does a disservice to the undoubted qualities of the best of the court painters, and will only reinforce prejudices about eighteenth-century French court painting, its flatness, stiffness, and artificiality. Nevertheless, there is much so see and discover. In addition, Versailles the book is a superb production, beautifully designed and illustrated, with informative, well-written essays. 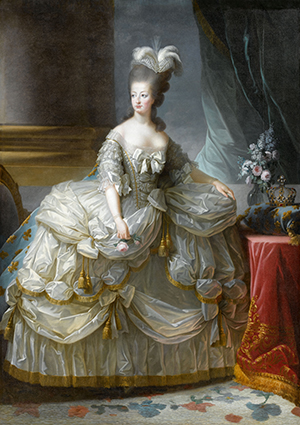 After Louise Élisabeth Vigée Le Brun Queen Marie-Antoinette 1779-80, oil on canvas, on loan from the Palace of Versailles (photograph by Gérard Blot, courtesy of the National Gallery of Australia)Both exhibitions will whet the appetite to see more of the same. A History of the World should encourage us to look at objects differently and to visit the British Museum. Let us hope that the model for A History of the World is also a learning experience for staff at the National Museum of Australia, and that they revamp the atrocious and embarrassing display of their remarkable permanent collection in a way that is attractive, coherent, and meaningful.

Those fascinated by Versailles will want to visit the great collections of ancien régime paintings and decorative arts at the Louvre, the Wallace Collection, and The Metropolitan Museum of Art. For more on the French eighteenth century, two recent publications are highly recommended: the sumptuously illustrated and superbly written Louvre tome, Decorative Furnishings and Objets d’Art in the Louvre: from Louis XIV to Marie-Antoinette (2014) and Peter McPhee’s riveting account, Liberty or Death: The French Revolution (2016). Those who want more on A History of the World in 100 Objects will need to acquire Neil Macgregor’s masterly original volume of the same name, published in 2010, or his BBC audio CDs, or both.

Versailles: Treasures from the Palace is at National Gallery of Australia until 12 April 2017.

A History of the World in 100 Objects is at the National Museum of Australia until 29 January 2017.