In the last seventy days of Vincent van Gogh’s short life, he painted seventy paintings. His intense life as an artist lasted for a single decade, from the age of twenty-seven to thirty-seven. Before that he had been, variously, a trainee preacher, an evangelist to miners, a labourer, and an art dealer. All had brought little success and no satisfaction. How would he fare as an artist? His brother, Theo, was always his staunchest supporter, emotionally and financially. And it was to Theo that Vincent addressed more than 600 letters.

Not content with having the most productive ten-year period in art history, Van Gogh’s rechanneled Protestant work ethic also saw him produce enough memoir-esque writing to fill four volumes, each the size of a big city phone book. Some have seen him as a demented saint or martyr, and more myths have revolved around him than any other artist (that he lost his ear in a duel with Gauguin; that he did not commit suicide at all but was shot in the stomach by a local boy with a fixation about the American Wild West, etc.). By contrast, Van Gogh had a clear vision of where he was going and of his own work and worth. ‘... on no account would I choose the life of a martyr. For I have always striven for something other than heroism, which I do not have in me ...’

The Letters of Vincent van Gogh (1914) should be recommended to every first-year art student – and indeed I always do this – along with Vasari’s The Lives of the Artists (1550). They are both page-turners, full of delicious gossip, high ideals, and often very low lives.

Van Gogh could be predicting Beckett’s ‘Try again, fail again, fail better’ when he writes to Theo on 1 October 1882, ‘Once again hard at work drawing, I sometimes think there is nothing nicer than drawing ... Things like this are difficult, however, and don’t always work straight away. When they do work, it’s sometimes the end result of a whole series of failures.’

Van Gogh wrote about the seasons almost as dazzlingly as he painted them. It is this seasonal overview, the dream child of Dutch curator Sjaar van Heugton (former head of collections at the Van Gogh Museum, Amsterdam), that makes the NGV’s current exhibition so special. A large part of the ground floor is divided into four spaces, and each is assigned a season. After a gallery full of the Japanese prints that so influenced Van Gogh, we begin with autumn, partly because the exhibition itself opened in autumn, but also because Van Gogh used to say that autumn was his favourite season. In the first series of rooms you will find a selection of his autumnal drawings and paintings made across his entire career, from 1880 to 1890. And so it is with each season – winter being the darkest of them all, the weather too cold to paint outdoors, but many fine drawings were made inside, with a model. And he talks about the seasons in his letters. 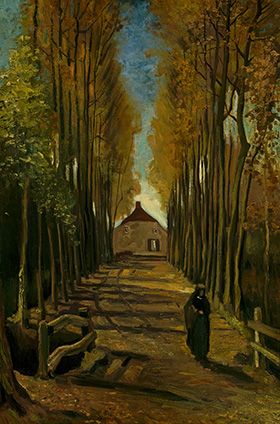 ‘Last winter I met a pregnant woman,’ he writes, ‘deserted by the man whose child she was carrying. A pregnant woman who walked the streets in the winter – she had her bread to earn, you’ll know how. I took that woman on as a model and have worked with her all winter. I couldn’t pay her a model’s full daily wages, but I paid her rent all the same, and thus far, thank God, I have been able to save her and her child from hunger and cold by sharing my own bread with her.’

This woman is Sien Hoornik. She also has a young daughter. Van Gogh takes her into his house and is determined to marry her against his family’s wishes. In summer, with the arrival of Sien’s child, he writes to Theo ‘We have a definite need of each other, so that she and I were no longer to be parted, our lives became more and more intertwined and it was love’. His new life would be made up of ‘a new studio, a still young household in full swing. No mystical or mysterious studio, but one rooted in real life. A studio with a cradle and a commode’. But by September he realises city life is beyond his means. He splits from Sien and heads first for the cheaper Hoogeveen and then for Nieuw Amsterdam. Three years later, he would move to Paris and throw himself into contemporary experimentation with his soon-to-be close friends the Australian John (Peter) Russell, Henri de Toulouse-Lautrec, and Émile Bernard.

Two years later, in 1888, he moves to Arles in the south of France, lodges in the Restaurant Carrel, and turns up the colour spectrum to full volume. The final two rooms of this great exhibition – Spring and Summer – have marvellous examples of this period, including a golden wheat field and an astonishing self-portrait.