The birth of cinema is conventionally linked to the Lumière Brothers’ inaugural public screening of their first film at the Salon Indien du Grand Café in Paris in December 1895: a forty-six second sequence showing Workers Leaving the Lumière Factory. But a compatriot inventor, Louis le Prince, had been experimenting with developing stereoscopic cinematographic cameras in the years 1888–90, well in advance of the Lumière’s publicised invention. Assembling apparatuses with multiple lenses as well as single-lens cameras, Le Prince managed to produce three eight-second films. Le Prince, however, mysteriously disappeared on a train between Dijon and Paris on 16 September 1890, an unfortunate denouement which consigned him to the dustbin of history. All that remains of his filmic experiments is a twenty-frame fragment depicting a view of Leeds Bridge. We know this because the contemporary artist Matthew Buckingham has made Le Prince the subject of his own film False Future (2007), one of several screening in MUMA’s current exhibition, Life inside an Image.

Buckingham’s film – made with the nearly obsolete technology of celluloid on a 16mm camera – speculates on what early cinema might have looked like if Le Prince had not disappeared in such enigmatic circumstances. Historic events, such as the court martial of Captain Dreyfus on 5 January 1895, might well have been documented using Le Prince’s cinematographic device.

Akin to Le Prince’s recording attempts, the aspiration to capture the world in its visual and material manifestations is the central subject of Life inside an Image. Brooding and atmospheric, the exhibition focuses on technologies of vision, modes of documentation, and the cultural importance of archiving. Yet, as several of the works imply, acts of conservation are not always virtuous or free from controversy. 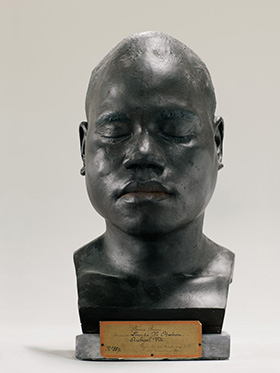 Fiona Pardington, Portrait of a life cast of Bouna Bouna (painted), Fiji (from ‘The Pressure of Sunlight Falling’ series) at Life inside an Image (MUMA, courtesy of the artist and Starkwhite, Auckland)Judy Watson reminds us of this in the keepers (2016), a nine-minute video depicting the conservation quarters of the British Museum and its holdings of Indigenous Australian artefacts. In a behind-the-scenes storage room, gloved hands open boxes encasing hand-woven leaf baskets and string bags wrapped in tissue. The sense of preciousness of the traditional artefacts is acute; both from the manner of archivist’s gestures as he delicately lifts the items from storage and the concentration of the camera’s focus. In an adjacent study room, the camera slowly pans across a shelf containing ledgers of colonial acquisitions, their hand-drawn titles on the spines testifying to a distant historical era. The British Museum holds a collection of approximately 6,000 Indigenous artefacts, mostly acquired in the early colonial period of 1770–1850. Many of these were the subject of a major exhibition the Museum hosted in 2015, Indigenous Australia: Enduring Civilisation; as the institution boasted, a large volume had never previously been on public display. But to whom do these artefacts truly belong? Collections of such artefacts were often taken from native cultures in brutal contexts of invasion, occupation and genocide as objects of plunder. Descendants of Indigenous peoples espouse the ethical necessity of returning such items to their own communities – or at least their own homelands – and the issue of repatriation remains mired in oppositional politics. The very deliberateness of Watson’s title, the keepers refers to the nineteenth-century term for museum curator but more emphatically denotes possession, implicitly underscoring the histories of colonial pillage and dis-possession.

Conversely, an endorsement of the role of museums as custodians of culture is proposed in Melvin Moti’s No Show (2004), a twenty-four-minute video centred on the fine art collection of the Hermitage Museum. It is relatively well known that when Nazi Germany invaded the Soviet Union in 1941, most of the Hermitage’s vast collection – numbering more than one million objects – was quickly evacuated and secreted in the city of Sverdlovsk (now Yekaterinburg). Less well known is the fact that guided tours were nonetheless given of the Hermitage’s denuded galleries, including rooms where only the frames remained after the paintings had been hastily removed. Moti’s research into the Hermitage’s archives unearthed firsthand accounts of such tours, including those taking place under Nazi occupation. In 1943 a troop of soldiers was taken on a tour of the empty painting galleries led by a museum guide who described the iconography of each of the missing pictures from recall; a tour which is vocally reconstructed in No Show, a guide’s confident voice booming out the paintings’ visual content in their physical absence, filmed against the backdrop of a bare room and the dying rays of afternoon light. 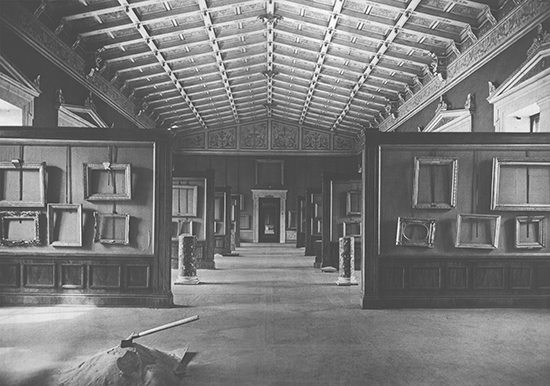 Melvin Moti, No Show (2004) at Life inside an Image (MUMA, photograph courtesy of the artist and Meyer Riegger, Berlin and Karlsruhe)

The determined means by which cultural institutions act as agents of preservation is similarly evident in the centrepiece of Life inside an Image and the exhibition’s most visually arresting work; Gerard Byrne’s Jielemeguvvie guvvie sjisjneli (Film inside an Image), 2015–16, a new video co-commissioned by MUMA, the Moderna Museet and the University of Warwick. Byrne’s continuous loop video focuses on the Biologiska Museet in Stockholm, in particular, its natural history diorama. Dating from 1893, the diorama was developed by the zoologist and taxidermist Gustaf Kolthoff as one of the era’s most spectacular, and presents a painted backdrop of the Nordic wilderness in front of which reindeer, lynx, foxes, and owls cavort, statically. The diorama is also distinctive for being lit solely by natural light via a ceiling aperture, leading Byrne to draw a conceptual parallel between the two technics of vision, interpreting the diorama as a kind of primitive camera. What is most apparent in Byrne’s video – in spite of its poetic and languorous cinematography – is the superannuated technology of the diorama itself. Originating in the early 1820s and preceding the advent of photography, the diorama was once heralded as the most sophisticated form of visual reproduction. Through a twenty-first-century gaze, however, this technology reads as outdated contrivance. Byrne’s video is the touchstone of the exhibition in its suggestion that although all technologies of reproduction are fragile forms of artifice destined to obsolescence, each animates the world in precise and singular ways. 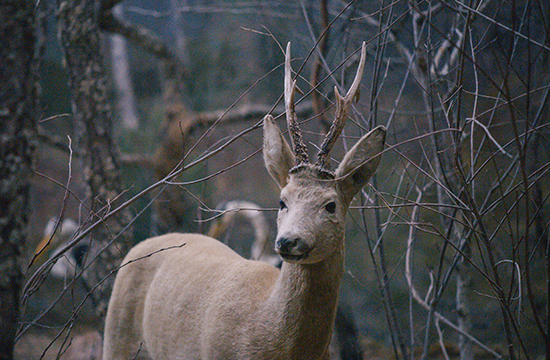 Life inside an Image is presented by Monash University Museum of Art (MUMA) in association with the Melbourne Festival, and is showing until 10 December 2016.