At the end of Richard Linklater's 1970s coming-of-age comedy Dazed and Confused (1993), an inebriated teenager encourages her peers to be optimistic: 'Maybe the 80s will be radical, you know?' Twenty-three years later, Linklater has provided a response to this suggestion with the film's 'spiritual sequel', Everybody Wants Some!!. Set in 1980 at an unspecified Texan college, Everybody Wants Some!! traces an ensemble cast of college baseball players as they negotiate masculinity, camaraderie, sex, and the forging of identity beyond the adolescent boundaries of high school.

In keeping with Linklater's fascination with story duration (Boyhood, the Before series, Slacker), Everybody Wants Some!! follows Jake (Blake Jenner), a handsome freshman pitcher, over a three-day period prior to the commencement of his first college year. The action begins when Jake arrives at his new lodgings, a dilapidated frat-style house on the brink of collapse, cohabitated by a cohort of gregarious men that he – and the audience – will come to know as his idiosyncratic teammates. Among them are the antagonistic captain, McReynolds (Tyler Hoechlin), and the group's charismatic social and intellectual leader, Finnegan, played by the magnetic Glen Powell. With a melange of personalities, humour derived from competitive masculinity, the constant pursuit of sexual companions, and a 'meet cute' established between Jake and a romantic interest, Everybody Wants Some!! seems to be a standard generational rite of passage film. 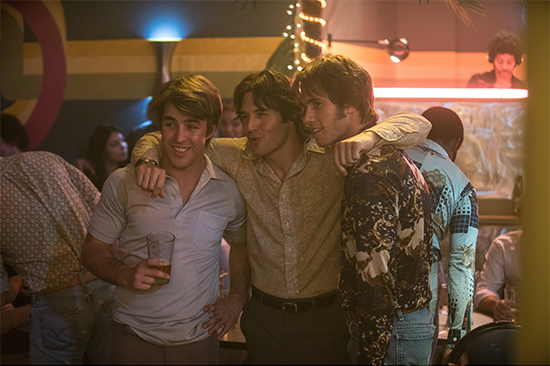 A scene from Everybody Wants Some!!

Indeed, in the tradition of college films such as National Lampoon's Animal House (1978) and Old School (2003), Everybody Wants Some!! revels in boyish banter, genital-orientated gags, raucous party sequences showcasing drugs, alcohol, and sex, and is punctuated by loud music that, in Linklater's characteristic style, anchors the narrative in a definitive historical moment. Despite these generic markers, Linklater's film is not a purely hedonistic romp, nor a rebellion against authority and institutions. There is no disgruntled Dean or rival fraternity to provide narrative conflict. Instead, Everybody Wants Some!! is concerned with the inner conflicts that emerge when navigating a new, uncharted social context. The 1980 setting mirrors this thematic premise, for the decade is yet to acquire its distinctive characteristics. The varied soundtrack – from Patti Smith to Hot Chocolate – prompts much of the film's comedy. In the pursuit of festivity and fornication, the men happily substitute their evening disco outfits for cowboy hats to 'fit in' at a country-and-western bar, and demonstrate their affinity with the town's burgeoning punk scene through the absurd addition of a ducks-feet necklace. These moments are hilarious, but through references to the myth of Sisyphus and Kerouac's Desolation Angels, and with the anxious-making intertitles that count down the hours until classes begin, Linklater offers more than a nostalgic or rambunctious comedy. Exuberant and comic though it is, Everybody Wants Some!! is also an acutely poignant study of identity in transition.

The complexity and nuances of Linklater's work is evident in his centring the narrative on Jake's freshman experience. By aligning the viewer with Jake, Linklater simulates the process of becoming familiar with a new social and physical milieu through subtle shifts in the film's immaculate attention to detail. The derelict state of the share-house recedes as it becomes a home and team headquarters, while characters initially presented as stereotypes – Californian stoner, Detroit tough-guy, megalomaniacal team captain – become more complex and distinctive as the film progresses.

The film's experiential approach is nowhere more evident than in its depiction of women. Although the men state that women are their equals and motivated by the same carnal drives, female characters are notably absent, with the exception of Jake's girlfriend, an intelligent performing arts major named Beverly. Mostly, the camera lingers on the women's youthful bodies as they gyrate on dance floors, and often perversely frames them from the waist down. Whereas in films like Van Wilder: Party Liaison (2002) women are positioned as disposable necessities for the male rite of passage, Linklater mobilises this uncomfortable generic trait by employing it critically. The women in the film are overwhelmingly similar, their long tousled hair and tight denim cut-offs worn as an idealised erotic uniform. Their uniformity suggests that, in the tradition of the genre, and in the view of Linklater's male protagonists, women are interchangeable sex objects. As the title indicates, there is a bacchanalian excess to college life, but here 'everybody' is far from an egalitarian term; rather, it is an élite group hinged on a social hierarchy under examination. Everybody Wants Some!! radically departs from the optimistic collective rebellion of Dazed and Confused. With joyous urgency, Linklater depicts college as an unequal and competitive landscape to be traversed by the individual.

Everybody Wants Some!! (MA 15+) written and directed by Richard Linklater. 117 minutes. Distributed in Australia by Roadshow Films. In cinemas from June 23 2016.