Film publicity is rarely subtle, so don't see Brooklyn if you are looking for the love-triangle tearjerker that its release poster promises. A film with its source in the spare, luminous writing of Colm Tóibín – as perceptive about women as any man writing – is never going to be standard Hollywood fare. Brooklyn benefits also from thoughtful direction by Irishman John Crowley (whose credits include an MA in philosophy) and an intelligent script – alive with Irish craic and nuance – by novelist Nick Hornby. Hornby is at home in both literary and cinematic modes, and frank about the commercial and artistic imperatives of film. 'Tóibín leaves a lot to the imagination', he notes in a Rolling Stone interview (4 November 2015), 'which you can't afford to do in film ... because the characters are standing right there. You have to commit in some way.'

So if the film has limitations, and it does, they lie in that conundrum of commercial cinema – its having 'to commit', rather than let the viewer linger, as a reader can, in uncertainty, or perhaps in wonder, at the tensions, the heart wrenches and ambiguities of ordinary lives.

Brooklyn leaves one with much to think about nonetheless (perhaps see it before you read the novel – double pleasure that way, rather than niggling disappointment). Its story, set in the early 1950s, is a contemporary migration and displacement narrative – the stark reality of which we see in Europe now. A young woman, Eilis Lacey (Saoirse Ronan), leaves her Irish hometown of Enniscorthy (Tóibín's own birthplace) to find meaningful employment in America. In our ruthlessly disparaging way, we would call her an economic migrant. Eilis's mother, played by Jane Brennan with stoic face and in poignant hand-knits, and her wise, self-denying sister (Fiona Glascott, memorable) connive at Eilis's going and mourn her leaving, just as they mourned the departure of the family's three sons to England – also for work.

Eilis's passage (steerage) to America is grim, but grimly comic, and yields a vignette performance by Eva Birthistle as Eilis's savvy cabin mate, who inducts her into shipboard survival tactics (don't eat, and lock the shared toilet on our side) and ways to navigate immigration at Ellis Island (never cough – they'll think you have TB). 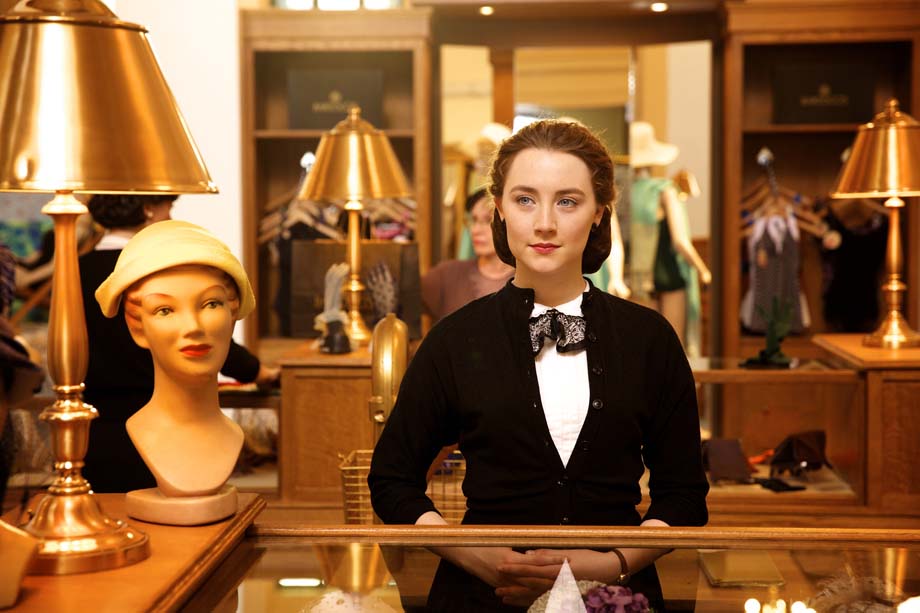 In Brooklyn, gentled along by the Irish priest, Father Flood (Jim Broadbent), who has organised her papers, employment, and boarding house, Eilis goes through emotional stages that closely resemble those of grief after a death. Broadbent, a consummate actor, is a touch constrained in his role – or perhaps we can no longer wink at wryly kind Irish priests. But Ronan is extraordinary, and because the film's narrative unfolds through Eilis's consciousness, she is given scope. Her face is so uncannily articulate that it gainsays Hornby's strictures about film's 'having to commit'. Ronan can do uncertainty, resolve, agony, or simple happiness with a tilt of her chin, a glance, or a widening of her pale eyes. I remember her alienating, compelling performances as the wrecking young girl in Atonement, and as the youthful assassin in Hanna. In Brooklyn she retains that edge of mystery, but adds a depth of female self-possession and moral courage. If she is beautiful, it is in ways that have nothing to do with manufactured glamour, a point sharpened by Eilis's contrast with her floor supervisor in the Brooklyn department store, Bartocci's, where she works. Miss Fortini is played (expertly) by Jessica Paré, with a scarlet-lipsticked brittleness familiar from her role in Mad Men. Fortini has a mask. Eilis has a face that reminds one why artists still paint portraits.

It is one of the film's victories that it manages to convey Eilis's modesty and virgin uncertainty without patronising. 'Innocence' is not the word, but a certain female reserve characterises Eilis's relations with the young men she meets, in Brooklyn and in Enniscorthy. Courted by Tony (Emory Cohen), a young Italian Brooklynite who comes to Father Flood's church dances because he 'likes Irish girls', Eilis is both responsive and cautious, a blend Ronan manages with finesse. I had difficulty though, with Cohen's performance: too many memories of Marlon Brando's full lips and Frank Sinatra's importuning eyes. Tony's Italian family, particularly the raspingly cute Frankie (James DiGiacomo), came dangerously close to stereotype. Other cameo performances, by Julie Walters as Eilis's shrewd landlady (who won't abide 'giddiness'), and Bríd Brennan as her acid Enniscorthy employer, Mrs 'Nettles' Kelly, are superbly entertaining, but edge close to being types.

Back in Enniscorthy, where she has to return (why? – no spoilers in this review), Eilis is squired by Jim Farrell (Domhnall Gleeson), who offers her position and security at 'home'. But what constitutes 'home'? Gleeson is a fine, unmannered actor, and all the more effective for the low key way he plays on Eilis's and the audience's sympathies, underscoring the pain of choice, and of attendant loss. 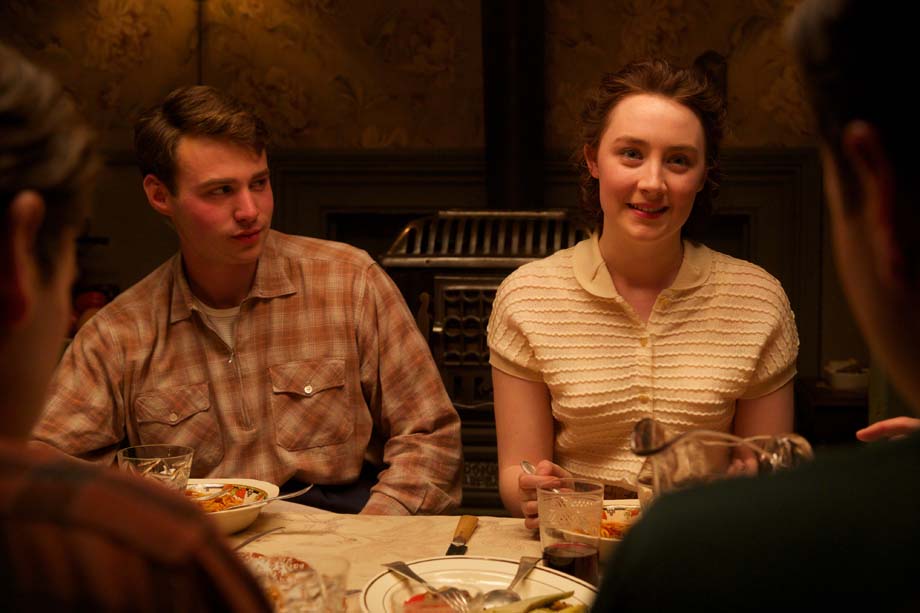 Brooklyn is beautifully shot, in Enniscorthy, Canada (for the Brooklyn Christmas sequence), and Brooklyn, the camera tracking Eilis like a benign doppelgänger, and occasionally expanding into eloquent, competing prospects – wide open land on Long Island, and Ireland's wild, free beaches. The score is apt, with one moment of transcendent stillness, when a homeless man (Iarla Ó Lionáird,) at Fr Flood's Christmas dinner, sings a perfect song in Irish, as freighted with significance as Chopin in Warsaw. Music doesn't need to 'commit', it seems. And here, the film flies.

Brooklyn (M), directed by John Crowley, screenplay by Nick Hornby, based on the novel by Colm Tóibín. Distributed in Australia by Transmission Films. In cinemas 11 February 2016.