The Labyrinth by Amanda Lohrey

In a 1954 letter to his niece Pippa, artist-nomad Ian Fairweather lamented that he could not write with sufficient analytic detachment to look back at his life and ‘see a pattern in it’. (Ian Fairweather: A life in letters, Text Publishing, 2019). The irony – that one of Australian art’s most profound, intuitive pattern-makers should be ruefully unable to ‘see’ the formative structures and repetitions of his fraught life – would not be lost on Amanda Lohrey. Labyrinth, her haunting new novel, is a meditation on fundamental patterns in nature and in familial relations, and our experience of them in time. But this is a novel, not a treatise, its narrative so bracing – like salt spray stinging your face – that one is borne forward inexorably, as if caught in the coastal rip that is one of the novel’s darker motifs. It is a work to read slowly, and reread, so that its metaphorical patterns can come into focus, and the intricate knots of structure loosen and unwind.

(If you don’t know about labyrinths, my earnest advice is do five minutes’ research and then draw a simple seed-pattern model for yourself. Like the prefatory list of names and patronymics in a Russian novel, this will be an essential tool. Just don’t, like a Lohrey character, become obsessive.)

The book’s epigraph is both prophetic and hortatory: ‘The cure for many ills, noted Jung, is to build something.’ Lohrey underscores the point by giving it to us twice, the second time in the maxims of Kenneth Marsden, father of the novel’s narrator, Erica. Marsden, chief medical officer and psychiatrist at Melton Park asylum (‘a manicured madhouse’ where Erica and her brother Axel grew up), held strongly to the therapeutic efficacy of making, of building: ‘A man who does not use his hands is a mind untethered, he would say: when you make something you become a rivet in the fabric of the real.’ Marsden repeats the Jung of the epigraph. And narrator Erica adds a parenthesis: ‘(though he otherwise thought him a charlatan.)’ It is characteristic of this novel that no received ideas slide through. Erica is a sceptic, an interrogator. She is also an avid learner, open and vulnerable in a world where things go awry, or ‘the gods thought otherwise’. Her father coaches her in Latin and encourages her undergraduate Greek: ‘Soon it became clear that I had an aptitude, a gift for entering wholly into another world, whether Melton Park or the gods on Olympus it made no difference.’

I was struck by that sentence (as with many in this taut, deftly edited work): Erica shares with her author a mordant intelligence and an ‘aptitude’ for empathy. I remember a striking essay of Lohrey’s (Voting for Jesus: Christianity and politics in Australia (Quarterly Essay 22), 2006) in which she interviews a group of young evangelical Christians. The temptation to satire was considerable but resisted, without intellectual compromise. The result was revelatory.

In The Labyrinth, a related capacity for reserving judgement allows Lohrey to create characters who are vivid, open-ended, never mere types. They surprise, disarm, disappoint, intrigue. And ideas, like a juggler’s orbs, dance in the novel’s air. Dangerous ideas, ideas that must be scrutinised, sieved for worth.

The novel’s story is stark, unflinching – gothic without contrivance. Erica Marsden, spurred by a labyrinthine dream, leaves her life of urban fracture – father dead, mother bolted, artist–lover departed and artist–son Daniel in jail – and retreats to the New South Wales coast, a littoral in every sense.

In The Labyrinth, a related capacity for reserving judgement allows Lohrey to create characters who are vivid, open-ended, never mere types.

There, in between wrenching visits to Daniel in his rural incarceration, Erica tries to piece together a rationale, a way of living. From her undergraduate Greek she retrieves the word kairos, ‘meaning not time, but timeliness … the right or opportune moment for doing’, kairos as distinct from chronos, ‘which is mere arithmetic’. And on the wind and sea-swept fallow ground next to the gemütlich fibro shack she buys, Erica sketches out a labyrinth, and finds another loner, called Jerko, a displaced European stonemason who ‘has the eye’ to help her build it. If you have ever watched a skilled dry-stone waller at work, you’ll know there is nothing magical about having ‘the eye’, rather a focused skill at making – with stone, with paint, with the oil pastels Erica buys for Daniel-in-prison – or with words. And all making carries the potential for destruction as well as creation.

But summary does scant justice to the subtlety and power of Lohrey’s writing, just as ‘the main ideas’ (yes, you can find them on the web) of Oedipus Rex read like farce. Every page of this densely populated novel, with its incised landscape, shimmers. A minatory Pacific gull scavenging for chips, ‘its beak pointed with loaded intent’, becomes an event; an old maple tree a welcome lecture in grounded form. Erica’s labyrinthine musings share some of the mad wonder of Melville’s cetalogical chapters in Moby-Dick, and her etymological diggings go deep:

The word labyrinth comes from the Greek word labrys, a double headed stone axe said to have been a weapon of the Amazons and to symbolize the early forms of matriarchal society. Said also to have been an early symbol of the act of creation, of techne, and making by hand …

In the form of the classical labyrinth, or seed pattern, its opening is said by some to resemble a woman’s labia, its outer rim the cervix, its coils the inner walls of the womb.

And Erica’s note: ‘The womb and the labrys axe. Female and male: mother and father. Except there is no reason why a woman should not wield an axe.’

Or a pen, indeed. The Scots called their poets the Makars. Amanda Lohrey sits well in their dark, wit-laced company.

Morag Fraser was Chairperson of ABR and was for many years Editor of Eureka Street. She was Adjunct Professor in the faculty of Humanities and Social Sciences at La Trobe University from 2003 to 2009. 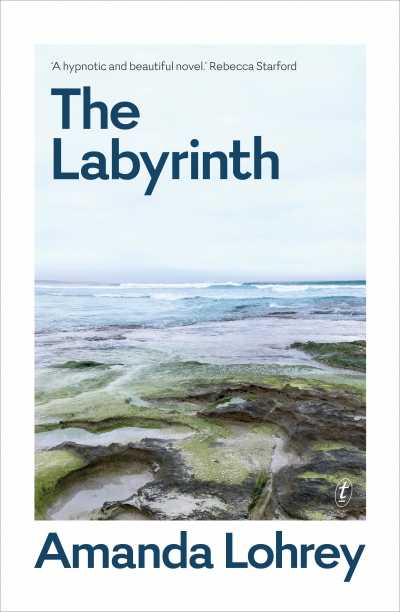