Apropos of Nothing by Woody Allen

Whatever you think of Woody Allen, you will probably find his memoir, Apropos of Nothing, compelling. It’s likely to convince you that he didn’t molest his adoptive daughter Dylan all those years ago. The resurgence of this accusation, first aired in 1992, has caused such widespread concern that Hachette pulled this book because of vehement objections by Ronan Farrow, Allen’s biological son with Mia Farrow, sometime partner of Allen and the woman who accused him of molesting Dylan. This was in the wake of her discovery that Allen had begun a romance with Farrow’s twenty-one-year-old adoptive daughter Soon-Yi Previn, to whom he has been married since 1997. The immediate context was a widespread office rebellion at Hachette.

In 2018, Dylan had gone on television attesting, Allen believes sincerely, to what he asserts is a false memory. The question of what Allen did to his seven-year-old daughter was exhaustively examined at the time. In 1993, two investigative teams concluded that the accusation was false and that there was a distinct possibility that Mia Farrow had coached Dylan. Nonetheless, in the wake of the #MeToo movement, Allen (director of umpteen films since What’s Up, Tiger Lily? in 1966) has struggled to have a new film distributed in America.

This memoir shifts between telling the story of Allen’s life and leading his own defence against the ancient and none-too-credible charges that continue to jeopardise his professional life at a bizarrely late age. He claims that when he invites people to work with him some of them say, ‘I waited all my life for this phone call, and now I can’t take the job’ for fear they will be blacklisted. Apparently, Timothée Chalamet told Allen’s sister that his agent said it would be better to denounce Allen if he wanted to have a chance of winning an Oscar for his role in Call Me By Your Name.

Allen says, ‘God forbid anyone should say, “This accusation has been thoroughly investigated and found to be untrue.” Although I’m told Joy Behar did make that point on TV. I should mention others who I’ve been made aware have come out publicly in my defense: Ray Liotta, Catherine Deneuve, Charlotte Rampling, Jude Law, Pedro Almodóvar, Alan Alda.’

It’s that kind of book: intensely repetitive, an old man’s book, perhaps born of a tape recorder, and seemingly different from the one Hachette was set to publish. The upshot is a rough, sometimes oddly affectless autobiography, though this in no way diminishes the authority of the work, the sense of conviction it carries, even though the overall effect is raw and garrulous. It has the unusual quality of sounding rambling and obsessive. Every so often, Allen indicates – despite a modesty that can seem pathological at times – just how much greatness he has had thrust upon him.

Here he is, on his hero, Ingmar Bergman:

I dined with Bergman and had a number of long phone conversations where we just gabbed … He was, I felt, the best filmmaker of my lifetime and he had the same fear I had. If he doesn’t know where to put the camera to make the most effective shot, how would I ever know? … Bergman invited me to his island a few times. But I always ducked it. I worshipped the guy as an artist, but … I’m not that dedicated.

There’s a lot of this stuff where he seems not to have got the tone quite right.

What comes across overwhelmingly – if inadvertently, for he seems to derive little pleasure from it – is that Allen has been phenomenally successful for something like seventy years. When he was still at high school, he was earning as much writing jokes for New York newspapers as his mother was as a house cleaner. He rapidly graduated to writing scripts for the greatest television comedians in America, including Sid Caesar. Jack Rollins (whose name is to be seen among the producers in the closing credits of Allen’s movies) persuaded him to do stand-up despite his reservation about his abilities as a live performer. By 1965, at the age of thirty, he’d written What’s New Pussycat? for Peter O’Toole, Romy Schneider, and Peter Sellers. He was underwhelmed by the greatest comedian of his day and says absurdly of O’Toole – the man Alan J. Lerner wanted for the film of My Fair Lady – that he hadn’t learned how to do comedy.

After Pussycat, he had total control over every film he directed. There are the early farces like Love and Death (1975), which are expert and pretty enchanting. He went through a couple of marriages – first to Harlene Rosen, a seventeen-year-old college girl with psychological problems, and then to the actress, Louise Lasser, who looked like Brigitte Bardot. In 1977 Allen made Annie Hall with his favourite actress, Diane Keaton. He emphasises that their romance was over by the time he made the picture, which won every Oscar in sight.

This is the period of the mellow humane romantic comedies of which Manhattan (1979) is a poignant example, brilliantly shot by Gordon Willis, the Prince of Darkness (so called for his love of chiaroscuro), the cinematographer of The Godfather. Stardust Memories (1980), in which Allen takes a shower with Charlotte Rampling, is a kind of homage to Fellini’s 8 1/2. Broadway Danny Rose (1984) has Mia Farrow in a brilliant incarnation of a mafia moll.

After this, the films become quite variable. He says that September (1987), with the great Elaine Stritch as Farrow’s mother, had all the qualities of Chekhov except his genius. It had in fact been anticipated in emulative impulse by Interiors (1978), with Geraldine Page, which is imitation Bergman, but Allen was gratified to hear that both John Gielgud and Ralph Richardson liked it. He says he was appalled to have to replace Gielgud as the narrator of the mock-doco Zelig (1983) because of his grandeur, and that he must be the only director on earth to have removed Vanessa Redgrave from a film because what he shot with her did not tally with the rest of the film.

The account of Mia Farrow’s systematic attack on Allen and the alleged curdling of her daughter’s memories is convincing and makes you think that Alan Dershowitz is right when he says that we live in an age of trial by accusation.

This is a likeable, ramshackle, almost amateur book by a genius who has almost successfully convinced the world that he’s a schlemiel. He comes across as an honest man, without vanity about his talent or much else. The jokes are hit and miss, but I liked the stories about how Judy Davis was such a great actress that he never dared say more than hello and goodbye to her.

And this book has the irresistible charm of its cold-eyed ironies. ‘How would I sum my life?’ he says. ‘Lucky. Many stupid mistakes bailed out by luck. My biggest regret? Only that I’ve been given millions to make movies and I’ve never made a great film.’

After such knowledge, every kind of forgiveness. He even jokes about his misfortunes and the last American election. ‘Hillary Clinton wouldn’t even accept Soon-Yi’s and my donation to her campaign for President and we couldn’t help wondering if another $5,400 to spend would have enabled her to carry Pennsylvania, Michigan or Ohio.’ 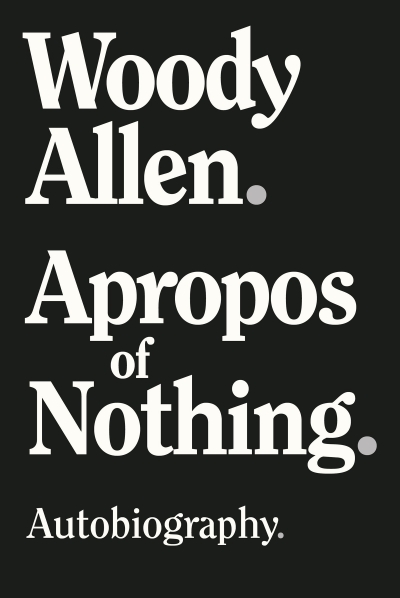