In June 2019, Australian Book Review announced the ABR Behrouz Boochani Fellowship, an initiative generously funded by Peter McMullin in association with the Peter McMullin Centre on Statelessness (University of Melbourne). This initiative was not only created to highlight issues pertaining to displacement and exile, but also as an important act of naming in the face of a border regime designed to strip human beings of their personal identities and dignity. Behrouz’s work has meticulously illustrated how Australia’s border politics drives people into submission and insanity by systematically erasing their names.

The act of naming and of erasure has far-reaching, multidimensional impacts, and is often part of dynamic collective processes. Acknowledgment and support by ABR can be better understood in relation to Behrouz’s oeuvre of critical writing and creative resistance, and also in the context of the awards he has received in Australia and internationally. In order to appreciate the different functions and dimensions associated with this new Fellowship, it is helpful to consider aspects of the organised transnational strategy Behrouz has been developing in association with various collaborators and confidants.

In 2018 Behrouz Boochani won the Anna Politkovskaya Award for Journalism. The award, announced in Ferrara, Italy, was organised by Internazionale magazine. This was a significant moment for a number of reasons. The award was established in 2009 to acknowledge and support the courageous work of distinguished reporters struggling for justice and truth-telling. Named in honour of the Russian investigative journalist who was brutally killed in 2006, the award is a testament to the brave and unrelenting contributions made by many journalists the world over. The Anna Politkovskaya Award is a way of encouraging more critical journalism and opening spaces for radically new and innovative forms of reporting. The very name of the award has both political and epistemic consequences; the award makes a historical statement and helps shape the future of journalism. It also works to incorporate cultures of resistance into the social imaginary. By winning the 2018 Anna Politkovskaya Award, Behrouz has established himself as a significant global actor in the history of reporting. 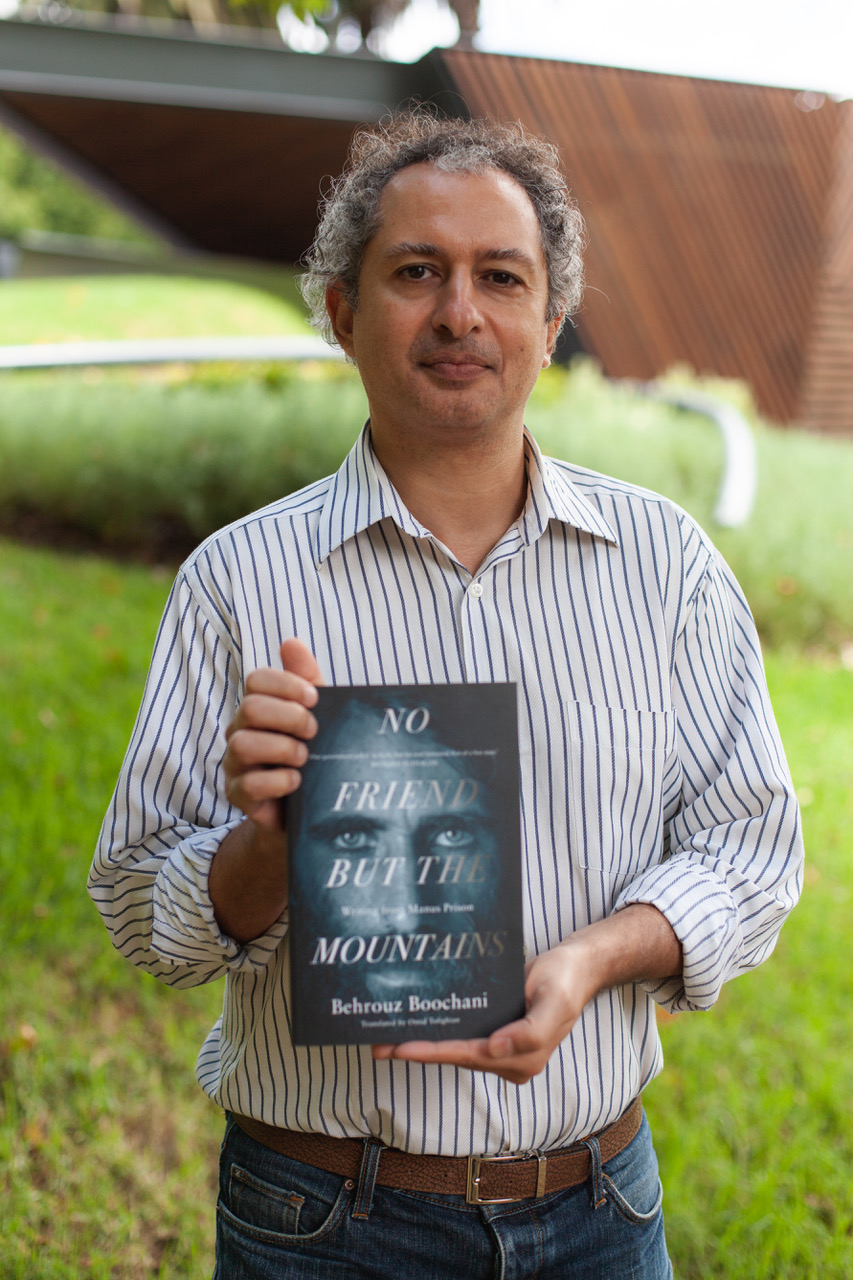 On winning the 2019 Victorian Prize for Literature, Behrouz engraved his name into Australia’s collective consciousness. His influence and example continue to reverberate throughout journalistic, literary, artistic, academic, and political circles around the world. The Wheeler Centre, which administers the Victorian Premier’s Literary Awards, decided to celebrate humanity and creativity rather than observe rigid rules. In deeming No Friend But the Mountains eligible, the Centre recognised the symbolic importance of establishing Behrouz’s name by disrupting standard bureaucracy and procedure. Other Australian awards have since followed suit.

A particular meaning-making and meaning-sharing activity takes place when a name either initiates a tradition or becomes an iconic part of a tradition. With the creation of the ABR Behrouz Boochani Fellowship, Behrouz’s name now represents both. Nonetheless, more needs to be said about the affirmation and empowerment associated with naming and how it can transcend institutions, operational networks of power, and bordering practices.

Behrouz’s name is an indispensable element of the intellectual and creative challenge against the colonial imaginary conditioning Australia’s border regime and detention industry. Dismantling the material conditions, political representation and policies is a matter of great urgency, but this must be coupled with a transformation of the epistemic and symbolic aesthetic. Behrouz is a political actor in the fight against border violence, but he is also an artist and intellectual. The two are necessary parts of his identity and his embodied experience in what he has named Manus Prison. No Friend But the Mountains produces a new language for knowing and fighting border violence and colonialism, and his method and vision involves radically new acts of naming. Understanding this factor, I tried to embody the same philosophical and political approach in the English translation.

The Anna Politkovskaya Award was Behrouz’s first major international prize. It represented a form of recognition and appreciation he had not experienced in Australia. I was privileged to accept the award on Behrouz’s behalf. It was surreal – and a tragedy – that he could not be there to accept it himself. I also worked closely with the Internazionale a Ferrara Festival – in particular Luisa Ciffolilli, Junko Tereo, and Marina Lalovic – to organise activities and to establish networks. With their profound understanding of the significance of Behrouz’s writing and resistance, they represented a vision that included politics, art, and community. This was clear in the way they integrated Behrouz’s journalism, No Friend But the Mountains, and the film Chauka, Please Tell Us the Time into their programming. (The Italian translation of No Friend But the Mountains will be published later this year by Add Editore; there is already great interest in the book in Italy due to the award and festival.) 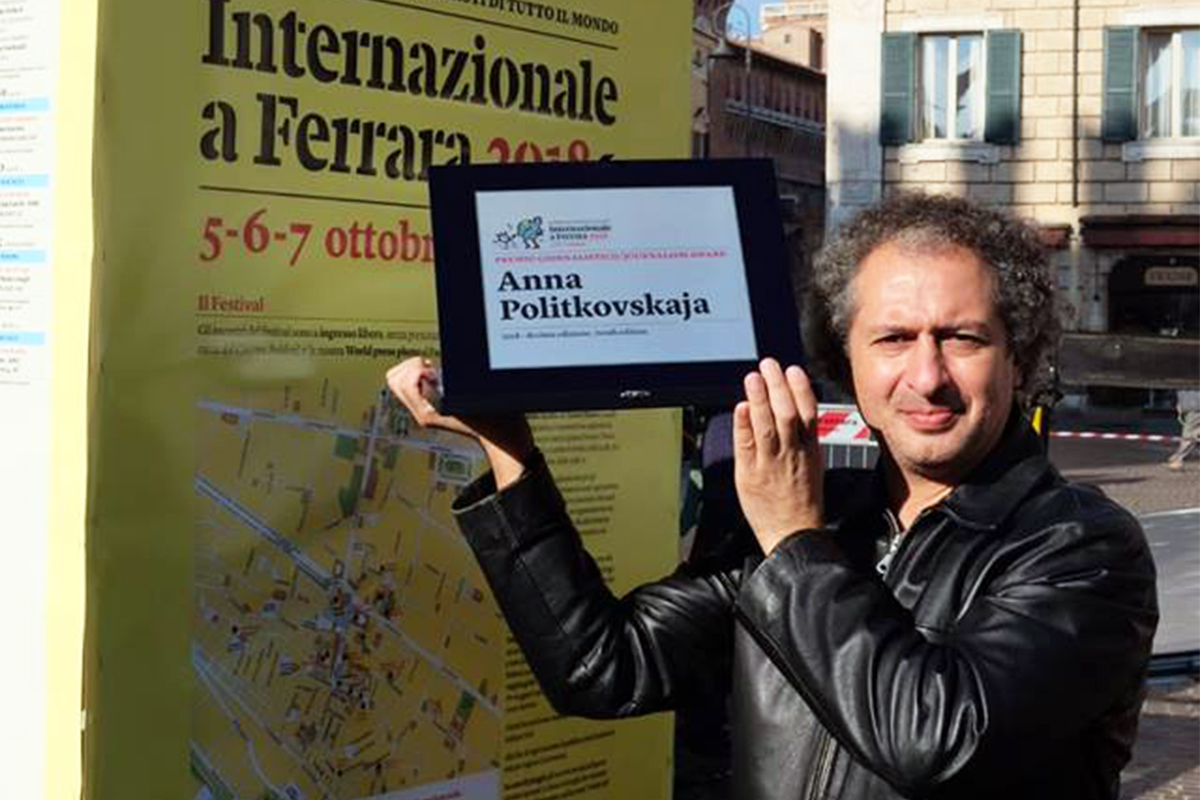 A significant number of Australian citizens are offended by the idea of removing colonial icons. They occupy digital spaces in an effort to erase or justify historical injustices. Political leaders continue to invest in celebrations of colonial glory in public spaces and further ingrain coloniality into their fabrication of Australian identity and values. In opposition, the act of naming can function as a form of resistance and has potential to disrupt and reclaim digital and public spaces. Behrouz Boochani is one of the many names that needs to reverberate in intellectual, educational, and artistic spaces, in addition to his role as a political and human rights activist.

Understood as part of other traditions of resistance, the ABR Behrouz Boochani Fellowship helps to galvanise a wider collective process. It has unlimited potential to initiate other projects and actions. The Fellowship – based on consultation, collaboration, and sharing – can be leveraged in empowering ways. An addition to the shared philosophical activity I discuss in my translator’s note, it is another call to action.

Part of a larger movement, this act of naming by ABR helps to form broader alliances and to invite the creation of more radical initiatives in future.

Omid Tofighian, an award-winning lecturer, researcher, and community advocate, combines philosophy with interests in citizen media, popular culture, displacement, and discrimination. He completed his PhD in philosophy at Leiden University, Netherlands, and graduated with a combined honours degree in philosophy and studies in religion at the University of Sydney. Tofighian has lived variously in Australia, where he taught at different universities; the United Arab Emirates, where he taught at Abu Dhabi University; Belgium, where he was a visiting scholar at K.U. Leuven; Netherlands for his PhD; and intermittent periods in Iran for research. His current roles include Assistant Professor of English and Comparative Literature, American University in Cairo; Adjunct Lecturer in the School of the Arts and Media, UNSW; Honorary Research Associate for the Department of Philosophy, University of Sydney; faculty at Iran Academia; and campaign manager for Why Is My Curriculum White? – Australasia. He contributes to community arts and cultural projects and works with refugees, migrants and youth. He has published numerous book chapters and journal articles, is the author of Myth and Philosophy in Platonic Dialogues (Palgrave, 2016), translator of Behhouz Boochani’s multi-award-winning book No Friend but the Mountains: Writing From Manus Prison (Picador, 2018), and co-editor of ‘Refugee Filmmaking’, Alphaville: Journal of Film and Screen Media (Winter 2019).