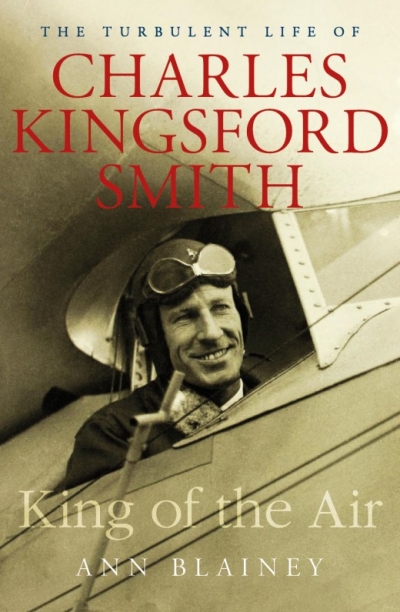 People spent a lot of time looking for the pioneering aviator Charles Kingsford Smith. When he disappeared for the final time in 1935 just south of Myanmar, then known as Burma, he was just thirty-eight but felt ancient. Hopeful rescuers came from far and wide, but their efforts were not rewarded. Ann Blainey remarks wryly that one day the Andaman Sea may ‘give up its secret’, but, until then, Smithy’s final resting place is as mysterious as that of MH 370.

This was far from being the first occasion on which he had vanished. He had piloted many aircraft whose positions became unknown for a time. On one awkward occasion in 1929, he was accused of faking his disappearance in a remote part of Australia. Two of his friends, Keith Anderson and Bob Hitchcock, died in the search and Smith was blamed for recklessly creating this catastrophe. Smithy was often immature, but a deception of this magnitude was unlikely.

Ann Blainey is the latest in a significant list of writers who have joined another type of search for Kingsford Smith, a man whose epic flights brought thousands of enthusiasts to aerodromes to wish him well. He was fêted with ticker-tape parades and a knighthood. Along with Bradman, he was one of those who supported a myth that people clung to in the Depression years: that the most unlikely things were possible. He flew across the Pacific, the Atlantic, and broke countless speed records. In an understated and careful way, Blainey wants to find more than the myth. She is a calm and measured historian who, unlike her subject, is not given to flights of fancy. Her search is absorbing. Yet what she charts is often uncomfortable.