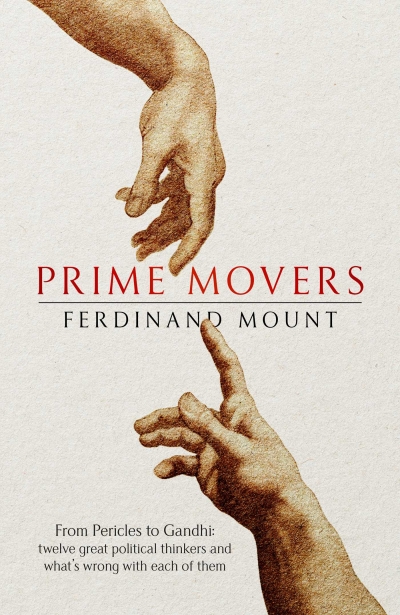 Prime Movers: From Pericles to Gandhi: Twelve great political thinkers and what’s wrong with each of them

Describe the twelve most influential thinkers who shaped Western political traditions. Chaos must ensue. Your list will be outrageous, but mine also. Consider whom you leave off the roll-call. Just one woman. No one from Africa or Asia. Only Jesus to represent millennia of Jewish thought. Yet books of lists appeal to publishers. Controversy sells. To call a book Prime Movers with the subtitle From Pericles to Gandhi: Twelve great political thinkers and what’s wrong with each of them just looks cynical.

This is unfortunate, for Prime Movers is often enjoyable and insightful. Ferdinand Mount, baronet, Etonian, former editor of the Times Literary Supplement, adviser to Margaret Thatcher, writes with clarity about ideas. His assessment of some big names in political thinking – Pericles, Jesus, Rousseau, Smith, Burke, Jefferson, Bentham, Wollstonecraft, Mazzini, Marx, Gandhi, and Iqbal – can be incisive. Thus Marx is praised in some detail for a perceptive reading of English industrialisation, but criticised at similar length for persisting with a labour theory of value. Jesus is not systematic, with no political program. He leaves a church to fill in the gaps, often with inhumane results. Thomas Jefferson proclaims universal principles but acts like the southern politician he was, failing to confront the original sin of American slavery. Mount has particular animus for Jean-Jacques Rousseau, who fails to think through the consequences of tearing up familiar institutions, and Jeremy Bentham for reducing human motivation to a simplistic formula and applying it to every aspect of society, from prisons to economies. Did the author have Margaret Thatcher in mind when mounting the cost?

Prime Movers: From Pericles to Gandhi: Twelve great political thinkers and what’s wrong with each of them