The Goldfinch by Donna Tartt

Donna Tartt has produced just one novel a decade so far: The Secret History, which came out in 1992 to enormous success; The Little Friend, ten years later, which barely rippled the surface of the literary world; and now The Goldfinch, which I suspect will achieve at least the standing of her first novel. Her novels possess a signature of sorts: crisply polished prose, perfect syntax, beautifully observed places and events, tricky characters, and unresolved crimes. They also explore the difficult world of adolescence, with their principal characters either witness to, or active participants in, those crimes. To this extent they possess a family resemblance to crime fiction; but they refuse to obey its conventions. The world is not restored to order at the end of her novels; the guilty are not punished, or the innocent rewarded. Instead, events and consequences roll indifferently on, unconcerned by fairness or justice or right, leaving the narrator to stumble through an attempt to make sense of what is in fact almost entirely random.

Theo, the narrator of The Goldfinch does precisely this, struggling through his own anomie and loneliness, struggling with post-traumatic stress and a fractured moral centre. For much of the novel he is a hapless adolescent, but when we first meet him, at the start of the novel, he is twenty-something, and hiding out in Holland. He has done something very wrong, probably involving murder. Though he is staying in a hotel room awash with Northern European beauty, where ‘the brocades were rich and the carpet was soft’, for him ‘the winter light carried a chilly tone of 1943, privation and austerities, weak teas without sugar and hungry to bed’, and he is sick and feverish and filled with ‘indeterminate anxiety’. Theo is a long way from home, and from comfort.

But he has been far from home, far from comfort, for much of his life; this he attributes to his mother’s early death. ‘Things would have turned out better if she had lived,’ he says. ‘When I lost her I lost sight of any landmark that might have led me someplace happier.’ This complaint forms a segue from his Dutch hotel room to his thirteen-year-old self, when he was a child loved and cared for by a vibrant, intelligent mother. He is not a particularly good child; he has been suspended from school for smoking, or perhaps for more criminal acts; and the reason he and his mother are out together on the day she dies is that they are supposed to be meeting the school principal for a ‘conference’ on his behaviour. Early for their appointment and caught in a rainstorm they step into the art museum, and as Theo follows his mother from gallery to gallery, listening to her disquisition on the works and their contexts, he notices a girl, who notices him. At that moment his mother draws his attention to a little painting, The goldfinch, by Carel Fabritius, who was killed by an explosion that destroyed his studio.

Three perfect things are thus present: Theo’s mother; the girl, Pippa; and the painting. Minutes later, in an echo of the painting’s history, there is a sudden explosion. ‘A roar of hot wind slammed into me and threw me across the room,’ Theo says, ‘and that was the last thing I knew for a while.’ When he comes back to himself, damaged and concussed, he is in a ruined gallery; neither his mother nor Pippa is anywhere to be seen, but in attempting to help the elderly man – Pippa’s grandfather – he inadvertently steals the painting. Then the dying man presses a ring on him, and directs him to ‘Hobart and Blackwell’ with the instruction to ‘Ring the green bell’: a fairy-tale moment that sends Theo to Hobie, the furniture restorer who will become his mentor and his guardian, and to Pippa, who is bound to Hobie by trust, and to Theo by their shared experience of trauma.

This is where the whirling energy of the novel seizes Theo. He has been thrust out of childhood, and sent unprepared into the world. He clings obsessively to the idea of his mother and of Pippa, and to the actuality of the painting. Each is a fragment of beauty and tenderness in a world that is increasingly ugly. But though all three elude him, the world is not entirely unkind: Theo finds himself faced with several options. He could remain with the elegant Barbours, where he seeks refuge after the disaster and where, if he was not exactly loved, he was cared for. He could stay with Hobie and become an honest antique specialist. He could go into state care or boarding school. But Theo’s capacity for choice is arrested when his failed actor father turns up, like a bad fairy, to whisk him off to Las Vegas, where they live in an empty house, in an empty suburb, on the edge of the desert.

Theo’s life here is characterised by an empty bleakness, the strange, stunned, disoriented state of the recently bereaved, until he meets Boris, a boy as orphaned and neglected as himself. Boris is a junior Russian criminal who teaches Theo how to shoplift, and introduces him to beer for lunch, pharmaceutical drugs for afternoon tea, and vodka as an aid to digestion before they slip into unquiet sleep. Other than the deep and abiding affection that grows between the boys, this life offers few charms. Theo asks himself, ‘how had I fetched up into this strange new life, where drunk foreigners shouted around me in the night, and all my clothes were dirty, and nobody loved me?’; while Boris’s philosophy – ‘None of us ever find enough kindness in the world, do we?’ – offers no consolation.

After Theo’s father dies, Theo flees Las Vegas for New York, and the safety of Hobie’s home. He returns to school, finds local dealers for his pharmaceutical drug dependency, and creates himself as an almost likeable, almost respectable young man. But his Aristotelean fatal flaw has travelled with him, along with his stolen painting, the material remnant of Theo’s ‘unbruised’ childhood self; together they drive Theo toward a dénouement that is first heart wrenching, and then unexpectedly consoling: the realisation that art is more than mere beauty, and human society more than darkness, catastrophe, and loss:

The painting, the magic and aliveness of it, was like that odd airy movement of the snow falling, greenish light and flakes whirling in the cameras, where you no longer cared about the game, who won or lost, but just wanted to drink in that speechless windswept moment. When I looked at the painting I felt the same convergence on a single point: a flickering sun-struck instant that existed now and forever. Only occasionally did I notice the chain on the finch’s ankle, or think what a cruel life for a little creature – fluttering briefly, forced always to land in the same hopeless place.

Whether or not one agrees with Theo about what art can do in an unkind world, the novel crafts a space for the possibility of something that might sever the chain, and afford a small, temporary hope. 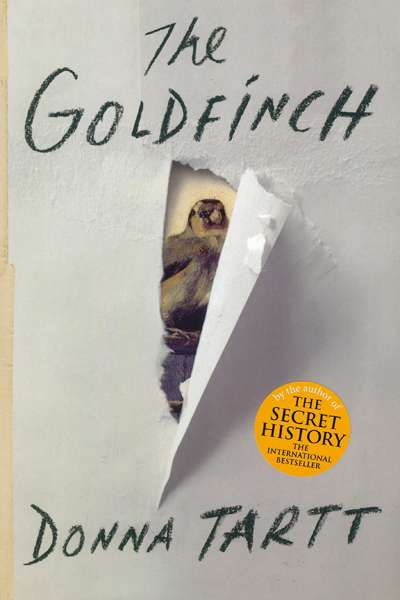