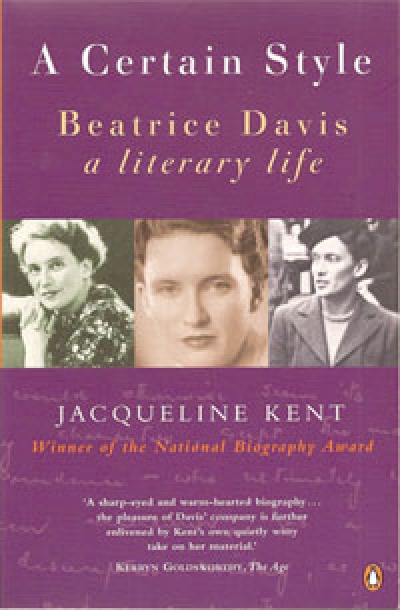 In September 2018, NewSouth published a new edition of A Certain Style.

On a chilly evening in 1980, a stylish woman in her early seventies, wheezing slightly from a lifetime’s cigarettes, climbed a staircase just beneath the Harbour Bridge, entered a room full of book editors – young women mostly, university-educated, making their way in a newly feminised industry – and proceeded, in her crisp, extemporising way, to lay down the law. She had been invited to talk about the role of the editor, but first came the caveat: ‘[A]lthough I can see that this audience consists mostly of women, I shall throughout refer to the editor as he.’ And so she did, despite the mental hisses of some in the audience – and despite years spent contending with the smugness, neglect and condescension of men in the publishing industry. Did she remember a very different lecture half a century earlier when, as an Arts student at the University of Sydney, she had watched Sir Mungo MacCallum start his lectures with the word ‘Gentlemen’, glaring at the few women in the auditorium.

Thus, beguilingly, Jacqueline Kent’s biography begins. The woman’s name was, of course, Beatrice Davis. After this personal prologue, the book proceeds in chronological fashion. It is a traditional biography. One suspects that ‘Beatrice’ (not to be addressed as ‘Bea’, as one of her authors discovered) would have approved of the style, if not of the act of publication itself. Kent discovered this a little later when Beatrice chastised her for publishing a history of radio. ‘You are an editor,’ the doyenne reminded Kent. ‘Editors do not write books.’ Indeed, she appears to have taken something of an interest in Kent’s life. Condoling with Kent, in 1987, soon after the death of her husband, Kenneth Cook, Davis said: ‘[I]t’s really difficult when you have to bury them, isn’t it?’