It seems to me that Alec found modernism insufficiently savage, although Jim McAuley glimpsed the influence of Rilke on him. His own diagonal assaults on religion, sentimentality, mammon, progressism, and bourgeois respectability took the form of fiercely condensed narratives, strangely inevitable, designed to shock as well as please. In ‘Easter Hymn’, Christ is roundly informed that the jig is up; ‘The Brides’ strips marriage bare, or at least compares it to the Detroit assembly line; the biblical Lot fucks his daughters, who keep him safely drunk; in his famous ‘Australia’, the poet up-ends our dear old Cultural Cringe; while ‘X-Ray Photograph’ reduces man’s life, even in the act of sex, to lonely desolation. His abiding theme, if you like, was Swift’s ‘folly of being well deceived‘, yet his later poems delight in civil discursiveness, in fullness of development, sailing into mildness.

A man who took great pleasure in life‘s pleasures, Hope could yet portray life sardonically, as in ‘Taken full-strength Ruth is a drug that kills‘; through chiasmus, as in ‘The marsh of stars reflects a starry croaking‘; metaphorically, by way of a giant tapeworm; or through the oblique eroticism of ‘That strange Man-language which you know by heart‘. He – or his poetry, rather – could opine that we all walk in hell. On the other hand, he fossicked richly in the great cellar of dreams, and came up with feral metaphors, surreal fictions, moments when the heart stands still.

As the music of my samples may have made clear, Alec Hope was wedded to old forms and measures, in particular to iambic pentameter and the quatrain. This has often been seen as his limitation, (iambics were downright wicked in the 1970s, as a sassy blues by Laurie Duggan made plain), but it could also be read as the sheep’s clothing under which the wolf of poetry made his forays. Wallace Stevens played his deconstructive thought-games under cover of comparably heavy pentameters, it might be added. And, in the vein of Stevensian irony, the large-voiced Australian poet could write, ‘now read my lines again: this is a message in code’. Once again the rug of certitude was pulled away. Alec was at once convivial and deeply plural. No wonder he believed in what Keats had called negative capability. He could be a Dean of Arts, give a lecture on Russian fiction, rejoice in a baggy pair of Murrumbidgee-soaked shorts at Pine Island, drink over-proof rum, or murmur jokes in Latin. He was once knocked over by R.G. Menzies’ huge bum, but that is tangential to my tribute.

As is well-known, the charming Alec could be a crusty critic; yet he was one of the major figures in bringing about the teaching of Australian literature in our universities, back in the decades when Anglophile ackers could still see it as a poor relation of the real thing. His ebullient prose study, A Midsummer Eve‘s Dream, runs close to being a feminist account of culture in early Renaissance Scotland. Different genre, different self, one is tempted to say, reflecting on how wide was the chasm between this book and his mock-heroic satire, Dunciad Minor, in which all current schools of literary criticism or of scholarship were taken to the cleaners.

The energy of a truly large imagination hews a civil clearing in chaos. It is a rich coincidence that Alec and his parallel-as-opposite, Judith Wright, should have died within a few weeks of each other. ‘For every bird there is this last migration’, indeed. An era of Australian writing is over, now, and we are its heirs. I, for one, will miss the soft, subversive rumble of his conversation over the whisky that he called Uncle Alec’s medicine, and I‘ll live with the memory that Tasmanian magpies all sing, ‘Ethiopia!’ 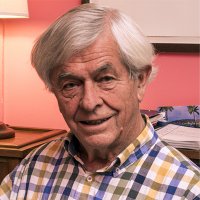 Chris Wallace-Crabbe AM is the author of more than twenty collections of poetry. His most recent books of verse include The Universe Looks Down (2005), and Telling a Hawk from a Handsaw (2008). He is Professor Emeritus in Culture and Communication at Melbourne University. Also a public speaker and commentator on the visual arts, he specialises in ‘artists’ books’. Read It Again, a volume of critical essays, was published in 2005. Among other awards he has won the Dublin Prize for Arts and Sciences and the Christopher Brennan Award for Literature. His latest book is Rondo (2018).

Chris Wallace-Crabbe AM is the author of more than twenty collections of poetry. His most recent books of verse include The Universe Looks Down (2005), and Telling a Hawk from a Handsaw (2008). He is Professor Emeritus in Culture and Communication at Melbourne University. Also a public speaker and commentator on the visual arts, he specialises in ‘artists’ books’. Read It Again, a volume of critical essays, was published in 2005. Among other awards he has won the Dublin Prize for Arts and Sciences and the Christopher Brennan Award for Literature. His latest book is Rondo (2018).