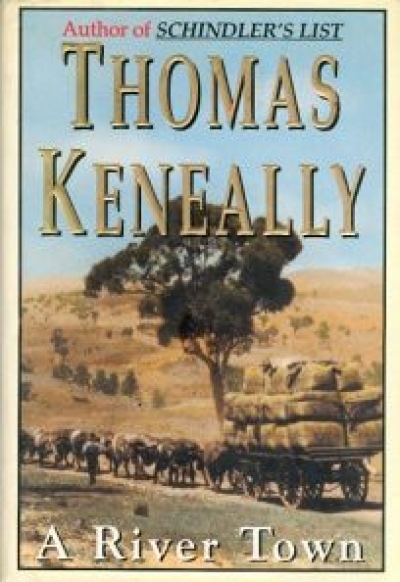 The river town is Kempsey on the north coast of New South Wales, 300 miles from Sydney. It is the new year and, we soon learn, just around the turn of the century, immediately before Federation. Once more Keneally has plundered Australian history in order to explore his concern with Australian identity.

Like Keneally’s earlier The Chant of Jimmie Blacksmith, the novel is set against the background of Federation, which is employed to make ironic points about the characters’ attitudes. It has a double significance here, of course, because the parallels are not only in the past but in the present and future, with the author (who is now Tom, rather than Thomas) presumably having the Republic in mind. The novel is filled with satire of pretentious individuals like Mr M.M. Chance and Ernie Malcolm and Billy Thurmond, who are Empire Loyalists. In the latter case there are strong contemporary references: ‘Don’t you worry about that,’ he tells a crowd at a political meeting. As with Jimmie Blacksmith, the events in New South Wales are played off ironically too against the progress of the Boer War in South Africa.

The central character is a storekeeper named Tim Shea and both he and the style of the novel in general recall not only Jimmie Blacksmith but Bring Larks and Heroes as well. Tim is like a slightly more mature version of Lieutenant Halloran from the earlier work. Acclaimed as a hero at the start, Tim is cast down and becomes an outcast, like Job who supplies the epigraph to the novel, before finally returning to grace in the eyes of the Lord.

A good Irish Catholic, who wants nothing but to live peacefully and prosperously in his joyously adopted country, Tim is continually drawn into moral dilemmas that he has difficulty coping with. He is unable to take an orphan girl into his house because his pregnant wife Kitty (‘his beloved stranger and spouse’) has invited her sisters from overseas and there is no room. The Loyalists and the Nationalists fight for his allegiance. The wife of Ernie Malcolm, to whom he is attracted, makes a silent plea to him, to which he is unable to respond before she dies.

Above all, he is obsessed with the identity of ‘Missy’, a young woman who died from a failed abortion and whose head has been severed and preserved in a flask of alcohol, ‘in accordance with long police practice in such affairs’. A policeman takes the head around the district, in the hope of someone identifying the nameless girl, and Tim becomes so obsessed by her, arranging for masses to be said, and criticising the conduct of the investigation, that eventually he becomes a suspect in the eyes of the local constable before finally discovering (or almost discovering) who was the father of her unborn child.

Keneally shows in Tim a complex mixture of generosity and vanity. His enthusiastic response to the landscape and to Australia in general is frequently pointed to and he takes a principled stand on issues ranging from refusing to sell methylated spirits to Aboriginal people to resisting the taking of compulsory Loyalty Oaths. Tim has no regrets for the old world and likes even the intractability of the antipodean landscape. He is an interesting enough character, an attractively plebeian hero, to almost hold together a novel which seems at times to go all over the place, with a gallery of characters ranging from an eccentric Indian hawker who turns Christian to a young orphan with an obsession for heights that finally proves to be fatal.

The writing is racy, informal, highly colloquial, full of oaths and swear words and enormously energetic; in short, the book is a very good read. Part of the problem with it, though, is that compared to, say Lieutenant Halloran’s, the moral choices and predicaments of Tim seem rather mundane. He suffers, true, at the expense of the bigoted elements in the community but his sufferings don’t amount to much more than the possibility of losing his store and having to move away. He is hardly, as he thinks of himself, ‘the lost man on the furtherest river bank of the remotest province’.

Keneally also seems determined to respond to any past accusations of misogyny and the portrait ofTim’s wife Kitty is a deeply affectionate and admiring one. When Tim is forced into quarantine because of the outbreak of bubonic plague, Kitty solves all of his most pressing problems within a week. At the end, his willing submission to her is symbolised in the change of name of the store, from T. Shea–General Store to K. Shea–General Store, and stated explicitly by the author: ‘His master was Kitty, and he was at peace.’