A Family Madness by Thomas Keneally

Thomas Keneally’s A Family Madness attempts to get the reader in touch with life beyond the headline and the common enough family madness which irrupts the security we call home, sweet home. While each family may be unhappy in its own way, only some hit the screen or the front page, splattering their sorrow onto family breakfasts, lunches, dinners.

Keneally has exploited our voyeurism to capture attention. We witnessed some time ago, via the electronic eye, the death of a family. Keneally sets out to answer our question, ‘Why?’. The Author’s Note at the end of the novel states:

In a suburb of Sydney, Australia, in July 1984, a family of five willingly ended their lives. Their consent to their own destruction had its roots in events which occurred during World War Two, in voices heard and insupportable fears endured in that era.

Keneally’s novel gives us voices from history which provide much information on Belorussian nationalist fervour. This results in political intrigue, moral chaos, and finally the destruction of a family in Australia. This is an imaginative account. We are told that while ‘the chief figures of A Family Madness are not meant to resemble anyone alive now or in the past … some of the minor characters bear the names and traits of historical figures’. The author also acknowledges ‘the invaluable Belorussian information contained in The Belarus Secret by John Loftus’.

There is much in this novel that is admirable – Keneally’s moral intent, his compassion, his close study of human nature. There is also much which is troublesome – the structure, the perspectives, the presentation of history as fiction. Keneally, imaginative social and historical chronicler, has in his possession many memories given to him by those he interviewed for Schindler’s Ark. He exploited them well enough in that novel to receive The Booker Prize. His sympathetic treatment of Schindler, nevertheless, did not provide the answer to ‘Who was this man?’. And no more does A Family Madness answer the question posed at the end of chapter one, ‘Who are those people?’. Perhaps one never can. Keneally tries.

In a sense there are two novels here. One is psychological and centred on the consciousness of Terry Delaney and his pursuit of personal happiness. The other is socio-political and focussed on the lives of Australia’s DPs. Keneally attempts to explain the migrant experience by using a romantic connection between Terry Delaney, ordinary Australian, and Danielle, extraordinary daughter of the unbalanced Rudi Kabbel who wipes his world clean by obliterating his family.

The opening pages quickly shape the protagonist Delaney, his situation, and dramatic incident. And Keneally’s fascination with the violent and macabre still holds. There is a feel of being thrust into a detective novel. In a sense one has. The crisp presentation jars a little by its professional smoothness. Keneally’s giving us the dope; spare, bare, relevant. The metaphors are delightfully witty, slick: ‘the same tousled and bruised wives’, ‘a sort of fluff of ennui caught in the crevices of their faces’, ‘a skinny woman maybe, but with the fibre of the law in her’. We are on the scene with Terry at the slaughter. We are caught. ‘“Oh holy Jesus, Delaney!” Rummage cried, beginning to weep. “Who are those people?”’ We too want to know.

Part One of the novel works on a flashback technique. Terry Delaney’s association is etched between the vignettes revealing his Catholic background (treated with satirical lightness), his marriage to Gina (slightly but meaningfully romanticised), his passion for Rugby League, and his simple Australian values (tastefully ironized). Here Keneally catches the rhythm, the twang, the mental world of the bloke next door. ‘Mind my pew and look at Diamond Head, and I’ll get us one of those crook beers each.’ Keneally’s Rudi Kabbel is a bit of a problem. He talks too perfectly even when he’s being colloquial. He is a literary creation. Keneally is aware of the difficulty of getting this new Australian voice. He slides out of this dilemma by resorting to a reportage summary of a conversation.

All the Belorussian treasures had been destroyed by other people, by the Poles, the Litvaks, above all by the Russians. For example, the Belorussians had and treasured a race of buffalo, of bison, like the bison which Buffalo Bill had hunted. ‘Now you didn’t know that, did you, boys?’ he asked Stanton and Delaney …

Part Two sets out to give the reader insight into the history of some of its migrants, the complications of their political allegiances, the weight of personal guilts, and the sins committed consciously and unconsciously. For me, this trek into the labyrinths of European politics was as riveting as any suspense thriller. Other readers may find the form somewhat flat, contrived, too much of a school history, and lacking dramatic tension. Where others might recoil at seeing chapters headed, ‘Radislaw Kabbel’s History of the Kabbelski Family’ and ‘From the Journals of Stanislaw Kabbelski, Chief of Police, Staroviche’, my migrant background mind was stimulated. Was this truth; was this fiction. Not only does the socio-political novel run in and out of the psychological study of Terry Delaney, but so does Keneally’s parallelism between the besieged mentality of Rudi Kabbel and the besieged parochialism of Australian experience. The Belorussians fight for their nationhood by collaborating with the Nazis; the Penrith Rugby League team fights for the premiership and collaborates with Queenslanders and Poms. The Kabbelski family has destroyed during the war Jews, Partisans, intimate friends (Nazi), and some of its own family. Terry Delaney’s destruction is lower key – his marriage and the jaw of an opposition player. There are loyalties and loyalties and legality is often a matter of perception.

Throughout this section Keneally lays clues to the symbolic dimension within the work; Gunther Grass’s The Tin Drum, Heller’s Catch 22, Conrad’s Heart of Darkness; there’s Uncle Security, Golden Style, and apocalyptic wave. Keneally, however, does not cast stones. Through his protagonist, Terry Delaney, Keneally hopes to demonstrate that understanding is possible. Unfortunately, the very structure he chooses prevents him from achieving within the consciousness of his selected typical Australian the kind of insight Keneally claims for him at the beginning of the novel. It is the reader who is given the inside story. Terry Delaney remains on the peripheries of these peoples’ history. He will be given the opportunity to uncover the Heart of Darkness once he is able to read the story left behind. Part three schematically closes the novel but in its closure it shows the structural flaw – the reader and the central protagonist have not shared the same experience. 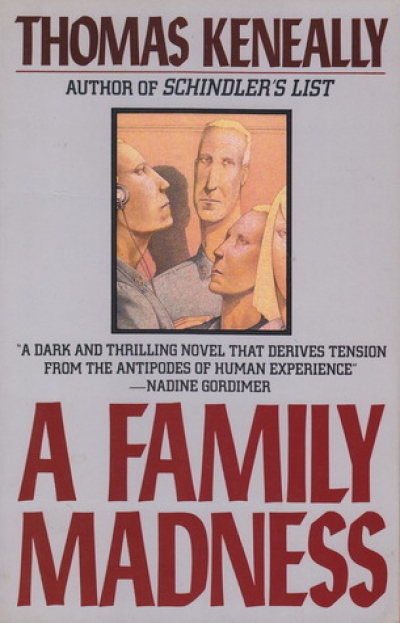