As the author of Rock Chicks: The hottest female rockers from the 1960s to now (2011), I was excited to plunge back into the world of rock and roll to review the Linda McCartney retrospective that is currently showing at the Art Gallery of Ballarat. I’ve also written about Paul McCartney and John Lennon, so am quite familiar with these lads from Liverpool.

With expectations framed by my own history and accompanied by Paul McCartney and Wings playing through my headphones, I was delighted to discover the exhibition is not the usual cavalcade of celebrity portraits and backstage antics. While there is, of course, a selection of her rock photographs, this collection is also a gateway into Linda’s private, inner world. It reveals how accomplished she was as a photographic artist; the cyanotypes and polaroids offer a wonderful contrast to the more formal works.

The retrospective, which spans six rooms of the gallery and largely features black-and-white works, begins with a series of selfies. Some echo the trend of photographing oneself in a mirror, with the camera clearly in the frame. Others are elaborate set-ups. McCartney was known for her use of natural light, and these compositions reflect an innate understanding of light and shadow play and how to employ both as visual language.

What is most intriguing about Linda’s self-portraits, which also appear at various times in the exhibition, are the subtle revelations about the artist, insights that are juxtaposed with her public persona as the wife of Paul McCartney, her role as a member of Wings, and later an animal activist. 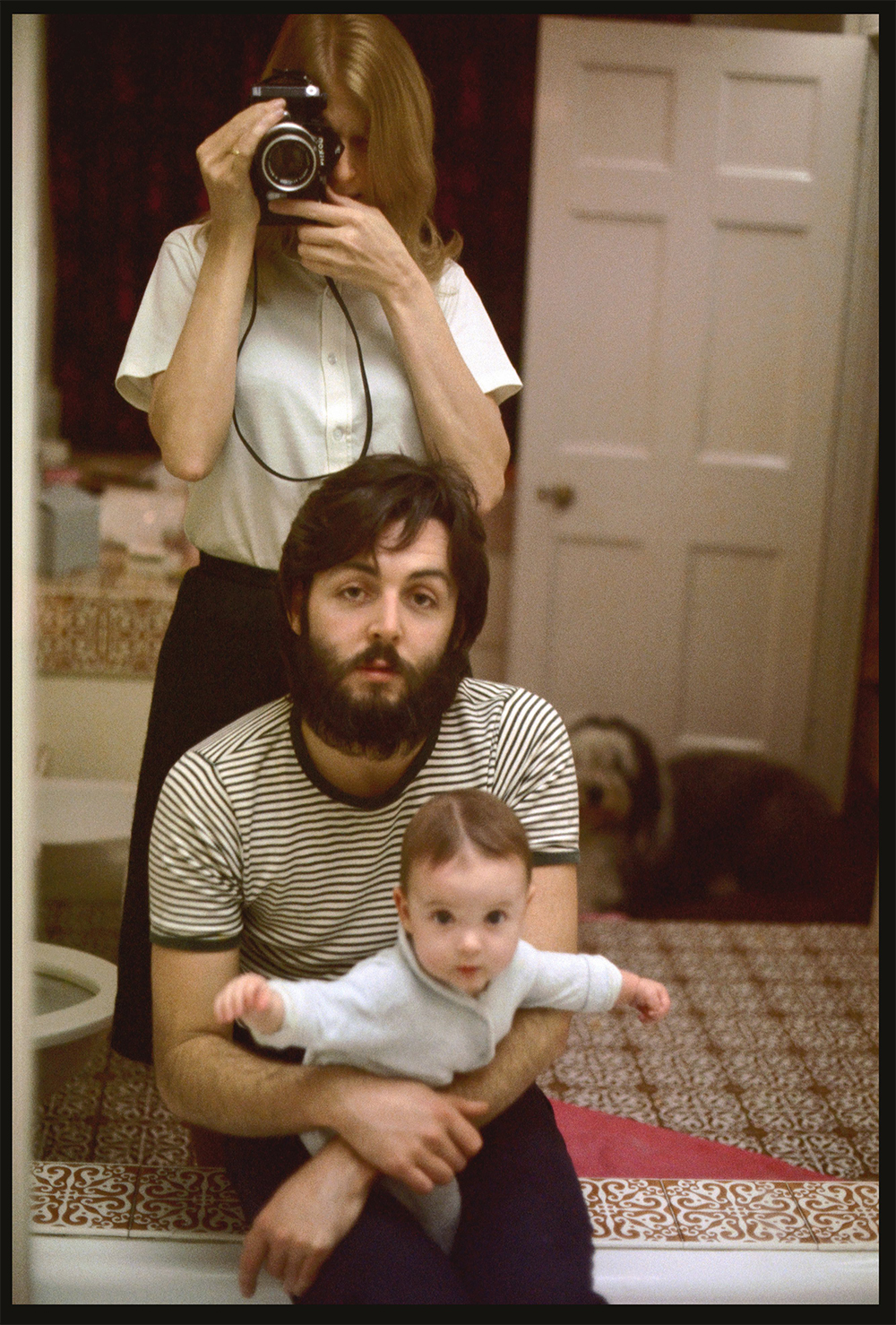 Self Portrait with Paul and Mary, London, 1968 (photograph by Linda McCartney, courtesy of the Ballarat International Foto Biennial)

There is a noticeable defiance in some of the self-portraits, perhaps a plea to be seen as herself, and the curation of this retrospective celebrates her individuality as well as the breadth of her oeuvre. I am drawn to one self-portrait in particular, taken in 1997 in the London studio of Francis Bacon, a year before her death, aged fifty-six. Linda is on the left side of the frame walking through the doorway, her image reflected in a mirror that has a large spider-web crack. One can read much into this picture. My interpretation is that the image depicts Linda exiting stage left.

Other selfies are comedic, such as the 1970 image where she is photographing herself in a London hotel bathroom mirror, the toilet, basin, and bidet in the shot, and Paul behind mimicking her pose. I found these self-portraits captivating, as were the portraits of Linda taken by musicians she photographed, including Jim Morrison and Graham Nash. These convey the camaraderie of the 1960s music scene.

Following this introduction are pictures from Linda Eastman’s first encounter with the Rolling Stones at a PR event on the Hudson River in 1966, three years before her marriage to the Beatle. At the time, Linda was shooting for Town & Country magazine. Her sense of humour is evident in the composition, as is her understanding of symbolism. Brian Jones’s face is obscured by the magazine he is exaggeratedly holding open as Mick Jagger looks on bemused. The pair is sitting against the boat’s windows. With the natural light streaming in, the Hudson in the background and the US flag prominent, the image is emblematic of the Rolling Stones’ assault on America.

This photo shoot is often touted as heralding Linda’s entrance into celebrity portraiture. In 1967, she was named US Female Photographer of the Year. The following year she became the first female to shoot the cover of Rolling Stone; it featured her portrait of Eric Clapton. At that time, Linda was also the house photographer at the famed Fillmore East in New York, where the likes of Jimi Hendrix, The Doors, B.B. King, The Grateful Dead, and Janis Joplin played.

In another room are behind-the-scenes photographs of The Beatles at Abbey Road, including some exquisite portraits of Yoko Ono. A personal favourite is the picture of Paul and John Lennon composing a song; it reveals their deep bond. There are also vitrines that feature magazine and record album covers along with contact sheets.

Some of her rock pictures provide a glimpse into her interest in street photography, the 1968 picture of The Yardbirds outside Baghdad House in London a case in point. What is most arresting about this image is the elderly woman dressed smartly in a hat and coat walking past the band. Her glance at Linda captures her utter disapproval. In this one shot is the tension of the generation gap that marked the 1960s.

There are photographs of the McCartneys’ four children, often with Paul, including a touching portrait where he is cradling newborn Mary, their first daughter. Linda’s love of nature, as a landowner in Scotland and as an activist, is also on show. The wall-sized image, Lucky Spot in Daisy Field (Sussex 1985), is one of the most engaging. Here the horse is surrounded by a sea of daisies, its passage imperceptible. It feels like an invitation to walk in a dream.

The picture ‘My Love’, where Linda has photographed Paul’s eye in a rear vision mirror, as he fixes his gaze upon her, is the final photograph in the show. This is a larger-than-life print that in a single image encapsulates their remarkable connection.

Walking out of the exhibition I hear Paul’s voice singing, ‘I never say goodbye to my love’, and I feel a wave of emotion, as if I have experienced something profound. It is a fitting end to an enchanting retrospective.

Linda McCartney: Retrospective is showing at the Art Gallery of Ballarat as part of the Ballarat International Foto Biennale until 9 January 2022.