‘If one were always to do the right thing – or rather, if, first thing in the morning, without even thinking about it, one were to just once set out to do the right thing, and then go on with it for the entire day – then, even before dinnertime one would quite definitely find oneself sitting in jail.’

Author, author? Wilde, perhaps? Shaw? Maybe even the Brecht of The Threepenny Opera?

No: Arthur Schnitzler, the Viennese doctor/novelist/dramatist, and author of Professor Bernhardi, the play which provides the starting point for Robert Icke’s ‘very free adaptation’. But Icke, who, on the basis of this production, has little interest in Schnitzer’s deft dialectics, wit, and a use of language that accommodates both elegant satire and forceful argument, can find no place for such smart paradox – though it can be found in the original.

No one would maintain that Schnitzler’s original text does not need cutting and shaping for an updated presentation of the issues he was concerned with back in 1912. (One of the drollest observations about Schnitzler’s style comes from Franz Kafka, who noted that ‘it is replete with the quavering hollowness of literary pretensions’, though he was speaking specifically of Schnitzler’s late works.) But a play like Professor Bernhardi is no more nor less overwritten than some of Shaw. Here, at every turn, Icke’s ‘re-imagining’ (and his direction) opts for crude juxtaposition, where Schnitzler’s outlining of the issues can accommodate both subtlety and directness, ambiguity and clarity. And Icke’s simplification is reflected in the performances of most of the actors.

A seat in Row G in The Playhouse is usually a pretty fair guarantee that audibility will not be a problem. But the projection and diction of too many of the ensemble varied from the slack to the lamentable, so much so that in the case of a crucial plot element, I was completely in the dark about the identity and role of one of the characters and what actually happened to him/her. (The verbal gender fluidity is deliberate, as – spoiler alert – an adolescent male is in the process of becoming a female, assisted by Juliet Stevenson’s Dr Ruth Wolff, who has replaced Schnitzler’s male Professor.) 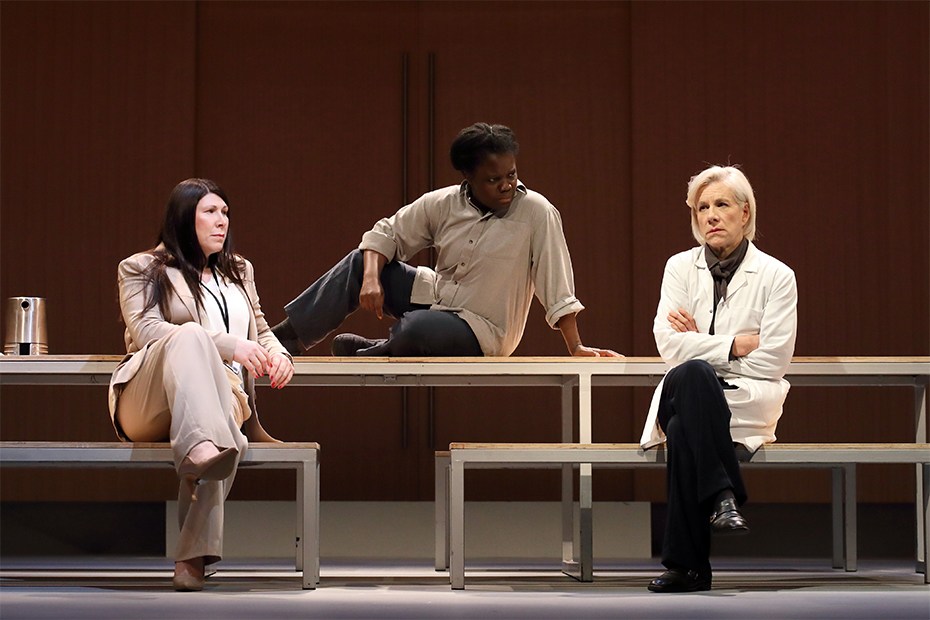 Much has been made, in the build-up to this production, of the fact that it is not just colour- but also gender-blind. No problem with that – on the face of it. Except that in the case of one of the crucial roles – the Catholic priest, whose efforts to deliver the sacrament and Catholic consolation to a dying fourteen-year-old girl precipitate the discussion of ethical, moral, and medical issues that make the Jewish Dr Wolff’s position a case for the presentation of professional and religious prejudices – he is so obviously white that when the adaptation reveals later in the play that he is actually black I started to think the problems with the diction had actually been reflected in the text.

This is not so much a case of positive colour blindness as theatrical myopia. It is also discernible elsewhere in the adaptation, and the dramatic ensemble, where performances are decidedly uneven. Juliet Stevenson is a wonderful performer, as she has shown across stage, film, and television. But too often here, when the dramatic action calls for an emphatic response from her, she shifts from quiet delivery to mere shouting (though, to be sure, she is far from alone in this). A notable exception to the lack of attention to diction and a sure sense of how to shape an extended exchange is provided by Chris Colquhoun’s Copley, whose crucial monologue at the end of Act I was one of the standout moments of the evening.

As was, indeed, the television-panel sequence in the second act, a cleverly re-imagined invention of the author/director, which makes ingenious use of, and provides smart updates for, some of the original’s arguments. But such moments were few and far between. One of the more superfluous and over-the-top moments of the Act II is the author’s addition of a character and scene nowhere to be found in the original: the explosion onto the stage of the dead girl’s father, whose emotions at the loss of his daughter are presented with a mix of melodrama and even physical violence that simply appear misjudged. 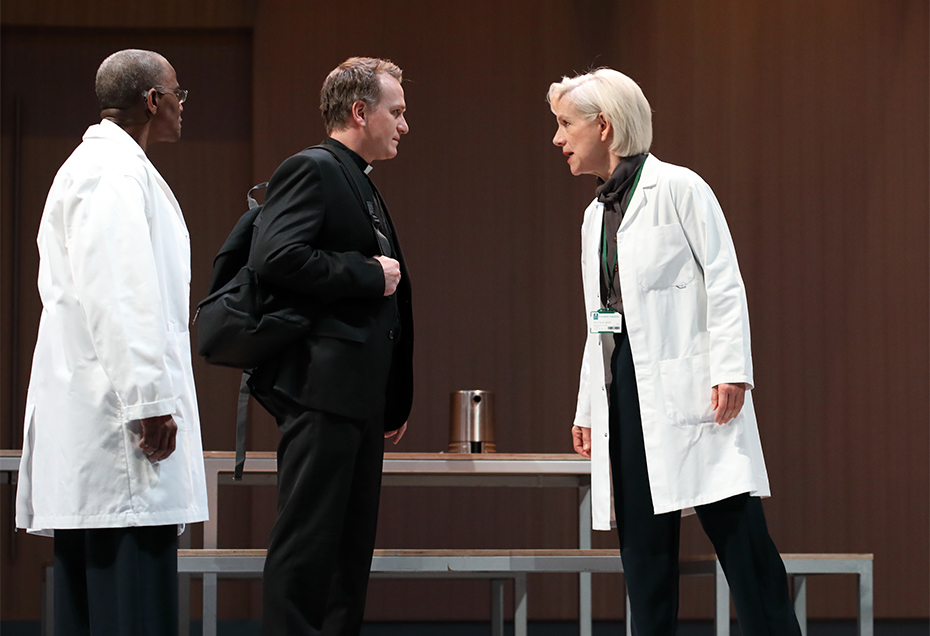 Misjudged also is the presence, suspended in mid-air above Hildegard Bechtler’s elegantly austere wooden semicircle, which effectively encloses the action, of a percussion player with an array of instruments that also includes a keyboard. Whenever a quiet or tense moment occurs in a scene, the audience is reminded of this by the percussionist’s use of brushes on the cymbal: and if things get a little exciting or passionate, what happens? Yes, surprise, surprise, forceful counterpointing of this on all the drums at the musician’s disposal. And when, for the last fifteen minutes of the evening, there comes an overlong reflective scene with Dr Wolff at the centre, we are encouraged to find our own emotional correlative for what we are hearing/watching by registering a repetitive series of widely spaced single notes on the keyboard, which are as banal as they are unnecessary.

But this is just another instance of the production’s refusal to trust the words on the page, or to understand what is so distinctive about the original (though a drama of ideas, its author explicitly termed it ‘a comedy’) and how it might be made to work for a contemporary audience. Schnitzler’s depiction of Viennese anti-Semitism and closed class- and religion-based cliques was so controversial that the play’s première took place not in Vienna but Berlin. His articulation and dramatisation of the issues – in spite of his own Jewishness and liberal attitudes – are in every respect more ambiguous and, yes, confronting than what Robert Icke gives us. For this was a writer who, although he stood up for his beliefs, could also declare: ‘I do not feel solidarity with anyone because they happen to belong to the same nation, the same class, the same race, the same family as I do.’

The Doctor is being performed by Almeida Theatre as part of the Adelaide Festival at the Dunstan Playhouse until 8 March 2020. Performance attended: February 28.