The contest between Elizabeth Tudor and her cousin Mary Stuart, providing two such meaty roles, has proved irresistible fodder over the years for actresses on both stage and screen. On film, Katherine Hepburn and Florence Eldridge, Vanessa Redgrave and Glenda Jackson, and Saoirse Ronan and Margot Robbie have taken turns to duke it out. Recently, on stage in London, there was a much-praised adaptation of Friedrich Schiller’s Mary Stuart in which a coin toss at the start of the evening determined which of the two roles Juliet Stevenson and Lia Williams should play.

Now it is the turn of Caroline Brazier and Helen Thomson to tackle these iconic roles in what is billed as an ‘adaptation’ of the Schiller play by Kate Mulvany. Mutilation would be a more apposite word. 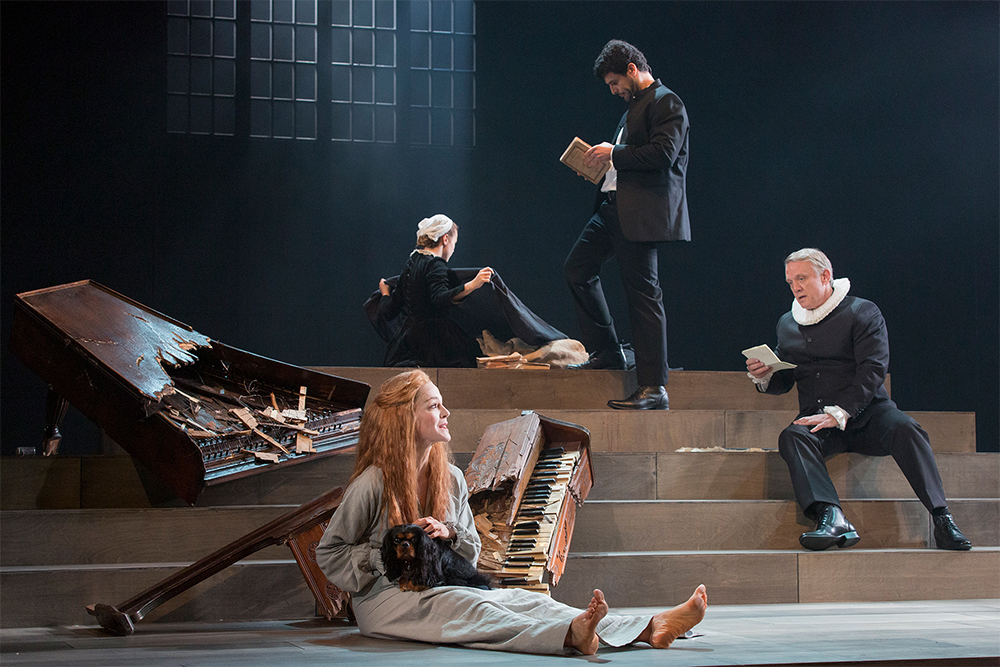 Schiller’s wordy drama comes down heavily on the side of Mary, but she is no simple victim. Ironically, it is her pride and amour-propre that ultimately bring her down. He plays fast and loose with historical fact – inventing a character, Mortimer, who is a fanatical devotee of Mary, and famously concocting a meeting between the two queens, a meeting which actually never occurred.

In her program notes, Mulvany comments on the way the media have tried to beat up conflict between various royal women – Diana versus Fergie, Kate versus Megan – and contends that the patriarchy cannot abide the prospect of powerful women being anything but rivals. This is undeniably true as far as popular culture is concerned, two prime examples being Clare Boothe Luce’s The Women and the recent television series Feud.

The problem here is that Elizabeth and Mary actually were rivals, for several decades until her execution in 1587. To downplay the fact muddies the waters and weakens the drama. Schiller’s two queens (both descended from Henry VII) are strong, complex women very conscious of their royal heritage and where that places them in society. Mulvany’s are, well, what?

Brazier’s Mary Stuart is a very matey type, joshing with her jailor, Paulet, who calls the former queen of France and Scotland Mary. Her lack of nobility means we get no sense of the lèse-majesté with which she feels she is being treated, and her contention that the jury which has condemned her is in no sense a jury of her peers goes for little. 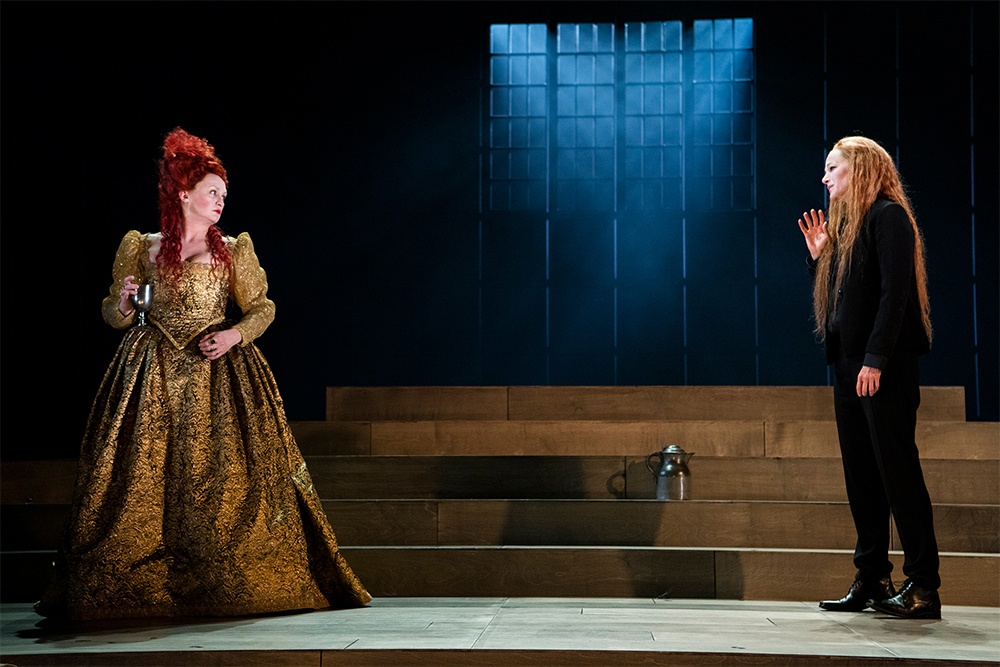 As is the fashion now, Mulvany’s script is deliberately demotic. This might not matter if the everyday language were used with any skill. Here it is leaden, dull, obscenity-laden, and the occasional direct quotes from Schiller sound almost absurdly out of place. Given the fact that the meeting between the two women is entirely an invention, there is no reason why it needs to take place at Schiller’s Fotheringay. Mulvany makes it a fantasy in which Elizabeth, under the influence of alcohol and ‘substances’ (what substances were there in Elizabethan England: eye of newt, tongue of frog?), conjures up and finally confronts her nemesis. Here, Schiller gives us a mighty encounter between two strong, flawed, but ultimately heroic women (as Donizetti did in his 1835 opera Maria Stuarda, based on the Schiller). Mulvany, on the other hand, has them enter into a dispute as to who is the greater victim. Women who define themselves by what men have done to them.

The real problem with the play is that the cast have only, indeed barely, two-dimensional characters to work with.

This is a shame since the Sydney Theatre Company has assembled a group of actors that could successfully have played either the Schiller original or a worthy adaptation. Towards the end of the play, both Thomson and Brazier are allowed effective soliloquies which they handle superbly. Here, we see what they might have achieved if the rest of the script had reached that standard. 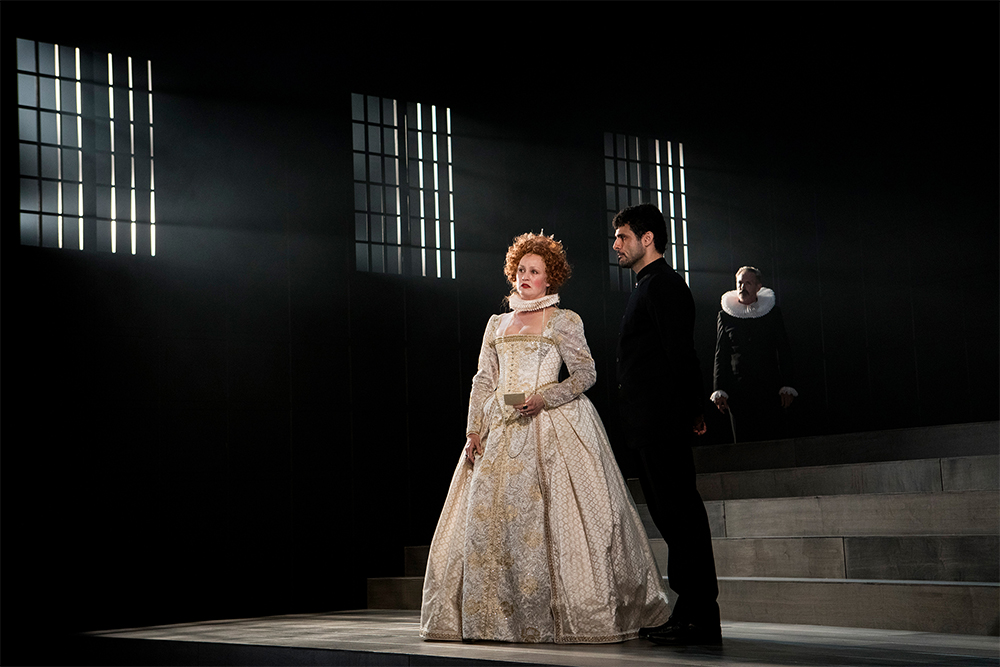 The supporting roles are strongly cast. Simon Burke makes a warm, decent, likeable Paulet. As Shrewsbury, Peter Carroll turns in one of his effective old fogey performances. As Mortimer, Fayssal Bazzi has to struggle with the fact that his part has been so cut that it is difficult for him to develop it. For some reason, his character has been turned into the sixteenth-century equivalent of Jack Dracula and become a tattooed, walking billboard. However, Bazzi makes his mark, as it were.

Technically the play is up to STC’s usual high standard. Lee Lewis moves everyone on and off Elizabeth Gadsby’s signature rostra with aplomb. Mel Page’s costumes, Paul Jackson’s lighting, and Max Lyandvert’s music and sound design all work well.

The theatre is finally getting to hear more women’s voices, and it could use more potent female takes on stories until now told by men. Unfortunately this is not one of them.