Australian musical theatre has had a long if chequered history going back to the popular, localised melodramas and pantomimes of the nineteenth century. In the more recent past, we think of successes such as Priscilla Queen of the Desert (1994) and The Boy from Oz (2003). We tend to overlook more intimate exercises in musical theatre, such as the innovative Sydney Phillip Street revues of the 1950s.

However, there is some degree of optimism in theatrical circles at the moment given the current success of Muriel’s Wedding, The Musical. It is in this context that we should consider the adventurous musical adaptation by James Millar and Peter Rutherford of Rosalie Ham’s novel The Dressmaker (2000), which had already been made into a movie in 2015, directed by Jocelyn Moorhouse. This stage version, at the newly renovated 560-seater Alexander Theatre, at Monash University, is described as a ‘workshop production’, but the support of the Pratt Foundation and the Production Company suggests that there are hopes it may be the forerunner of something bigger.

It is a challenging undertaking, the novel focusing on the 1950s wheat-belt country town Dungatar, which has a multitude of eccentric characters with a complex web of relationships. The story begins with the return of Tilly Dunnage to see her ailing mother, Molly, after a long absence. Tilly brings with her an expensive sewing machine and a determination to share her haute couture with the women of Dungatar. Naturally, she has another more personal agenda that emerges gradually. She is greeted by Sergeant Farrat who escorts her to Molly’s decaying house on the hill looking over the town. Rosalie Ham’s novel had been presented as ‘an Australian gothic novel of love, hate & haute couture’. The experienced director Suzanne Chaundry prefers to describe it as ‘a black comedy’, though she agrees that there is a ‘whiff of Australian Gothic’. The company is led by five ‘guest artists’ who take the principal roles, the rest of the townspeople being played by students of the Monash Centre of Theatre and Performance. The guest artists appear to have been funded through the Jeanne Pratt Musical Theatre Artists in Residence Program.

The simple set, designed by Dale Ferguson, is functional and efficient, and Chloe Greaves costumes, of particular importance in a show about 1950s haute couture, help give a sense of period. Hester van der Vyver brings style and presence to the central role of Tilly. Sue Ingleton has a whale of a time as the wheelchair-bound Mad Molly. Josh Gardiner conveys the innocence of Barney McSwiney (one of eleven children in the novel). Nelson Gardner, as his elder brother Teddy, is the nearest thing to a hero in the show – he’s the town full-forward – and provides the love interest with Tilly, but has the theatrical misfortune to die at the end of Act I. Noni McCallum has a demanding double to negotiate as Marigold, the victimised wife of Councillor Evan Pettyman, and Una, who opens a ‘salon’ in competition with Tilly. John O’May is the cross-dressing Sergeant Horatio Farrat. I have affectionate memories of Hugo Weaving’s subtly witty performance in the movie, but O’May presents a more driven Farrat, wearing his drag with increasing majesty as the show progresses. Farrat also usefully takes the role of storyteller in this production. 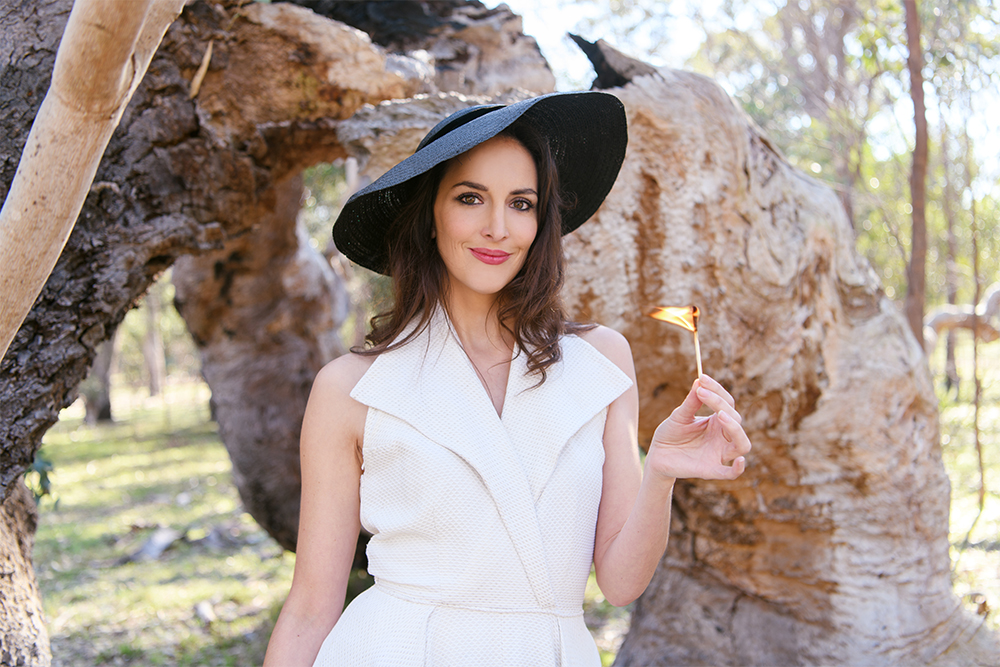 Promotional image for The Dressmaker: A Musical Adaptation

All the leads – and indeed some of the student performers – have good singing voices for musical theatre and know how to shape a number, but the quality of diction varies, particularly with the women.

With a lot of story to narrate, events can happen with surprising suddenness. Almost before you know it, Teddy, a bit of a show-off, has jumped into the silo to his sudden death (I’ll come back to that) and with a loud boom, Act I is over.

In Act II, there is more than ‘a whiff of Australian Gothic’, and the production takes on an appropriately surreal quality. The deaths start to pile up as the theme of revenge takes its toll. Most gorily, Marigold, made aware by Tilly of her husband’s extramarital activities in the town, coolly murders him in his bath. In the novel, as the story edges towards its climax, many in the town are conscripted into a disastrous production of Macbeth, which is performed in a neighbouring town, leaving Dungatar relatively empty, giving Tilly the opportunity to take her ultimate revenge on the town, setting fire to it before departing (with her Singer sewing machine). Sergeant Farrat risks his life trying unsuccessfully to save his precious gowns from the blaze. The musical settles for a quieter and more positive resolution of the plot. Macbeth is replaced by a costume parade that ends in chaos. Yes, Tilly does ritually destroy Dungatar in the form of the set (a clever bit of staging), but she is farewelled at the railway station by Farrat. They respect each other. The sergeant’s uniform has now morphed into that of a female officer, a nice touch. It’s a neat conclusion, reinforcing Farrat’s role as the storyteller.

Rutherford’s score is attractive, though some of the energetic choruses, such as ‘Rise and shine’, which recurs throughout Act I, are more like repetitive chants than developed chorus numbers. The fifteen members of the band are acknowledged in the program, but the musical accompaniment is in fact recorded. A budget consideration I imagine.

Musicals are often about communities – one has only to think of the classic Oklahoma, in which the town of Claremont brings the farmers and cowmen together or The Pajama Game, where it’s the pyjama factory and its labour relations. So the wheat-belt town is a tempting venue for an exercise in Australian Gothic. The difficulty is that the complexity of the plot means that much information has to be fed to the audience. A case in point is Teddy’s death in the silo. When he was a child, they used to play at the silo, challenging each other to jump into the wheat. But when, after a romantic evening getting to know each other, he takes Tilly to the silo, he doesn’t realise that the silo doesn’t contain wheat but sorghum, which is described as being like ‘polished liquid sand’. Teddy suffocates. If this vital information was given to the audience in Act II, I certainly missed it. I suspect those acquainted with the novel or the movie would have a definite advantage in fully grasping what at times is happening on the stage.

What has already been done to simplify the plot has certainly justified the ‘adaptation’. It is already a good night’s entertainment. Perhaps more could be done to refine the narrative and make the connections between the different strands in the story clearer and the transitions smoother.

Clarification:
ABR Arts now understands that the band does in fact play live from a rehearsal room below the stage. The producer notes: ‘This has become increasingly common practice in musicals as it allows each instrument to be mic-ed and provides much more control and balance to the live audio operator.’

The Dressmaker: A Musical Adaptation is being performed from 21 to 26 October 2018 at the Alexander Theatre at Monash University. Performance attended: October 21.