The tried and proven order of the traditional symphonic concert program dictates a short introductory piece, followed by a well-known concerto featuring a well-known soloist; then, after interval, a symphony to showcase both the orchestra’s and the conductor’s abilities. This palatable menu was, however, presented with a twist at this week’s concerts of the Sydney Symphony Orchestra. The invited conductor for the series, Thomas Søndergård, clearly made it his business to present the music of Jean Sibelius with the utmost care, right from the first note.

The first item on the program – two movements, Nocturne and Serenade from King Christian II: Suite, Op.27 – was a wholesome Scandinavian affair: a Danish musician conducting a Finnish composer’s work about a king who ruled Norway, Denmark, and Sweden simultaneously. And what splendid musicmaking it was! Søndergård transmitted his distinct perception of these lovely, if not world-changing movements with clear and elegant gestures. After the vague intonation of the woodwinds in the opening bars, everything settled and Søndergård’s fine musicality controlled the shaping and, in particular, the articulation of the musical lines. This was evident, for example, from the gracefully introduced gentle portato (slight detachment of the sound while playing in the same bow direction) phrasing in the strings early in the piece, the distinguished but always discreet harmonic support from the brass, and later, the expansive string unisono melody, which never lost its lush sonority, even while the violins were required to play most of it high up on the G string – not a common requirement from orchestral musicians. 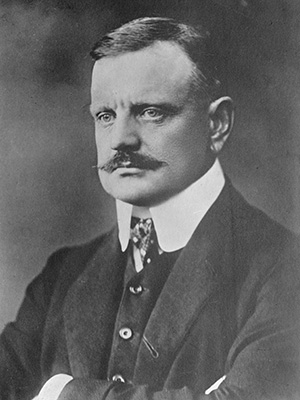 Jean Sibelius (Wikimedia Commons)The serene atmosphere of these two movements set the stage for the performance of the Violin Concerto in D minor, Op.47 by Sibelius. Although the work was composed in 1904, it remains one of the most romantic of all violin concertos, due to its melodious themes and technical fireworks. Sibelius, himself a violinist, was said not to be able to sleep for weeks during its composition but lived in a feverish frenzy as he tried out and refined its various themes time and time again. The first, formidably difficult version of the concerto was performed and quickly discarded, and the revised, familiar, and only marginally easier final version was conducted by none other than Richard Strauss at its première in October 1905.

Janine Jansen, the Dutch soloist of the concerto, gave a most exhilarating performance of this work. Over the oscillating murmur of the orchestral strings (a compositorial gesture that was already introduced in the Nocturne), her reading of the opening melody defied the muscular and imposing interpretation, so often heard from others; nor did she go to the other extreme and play the theme completely without vibrato, as Anna-Sophie Mutter did famously a few years ago. This performance fully embraced the composer’s instructions and that first theme, marked mezzoforte, sounded intimately delicate, yet fully intense. Jansen’s sensitive interpretation of Sibelius’s characteristic melodies was as impressive as her attention to detail. It even brought to the surface subtle points, seldom heard, like the very last note of her first, short cadenza, where she powerfully arrived to the dizzily high final D, but immediately decreased its volume (as per the score’s instruction), in order to allow the orchestra to take over.

Jansen’s passion was fully convincing and under Søndergård’s leadership, the orchestra accommodated all her artistic suggestions. Whether she played alone, as in the extended cadenza of the first movement, presented the theme, or accompanied the orchestra (as in the folksy tune of the flutes and clarinets toward the end of the movement), her playing was crisp, technically superb, and altogether commanding. The warmth of her beautiful instrument, one of the best Stradivaris I have ever had the privilege of hearing, was nowhere as persuasive as in the expansive, lush melody of the second movement. It was perhaps overly expansive, though, since in her chosen tempo the propelling rhythmic element of this movement – the quiet but persistent syncopations in the accompaniment – lost much of its quirky drive. The bucolic last movement excelled in strong rhythmic characters and powerful melodies, with only the clarity of the opening dactyl rhythms in the lower strings and timpani leaving something to be desired.

Pairing the music of Sibelius with that of Mahler was particularly apt. Not only was Mahler the same age when his first symphony was published as Sibelius when he penned his only concerto, but the two composers also met and talked at some length in Helsinki when Mahler conducted there in 1907. That was the time when he apparently said that ‘the symphony must be like the world. It must be all-embracing.’ 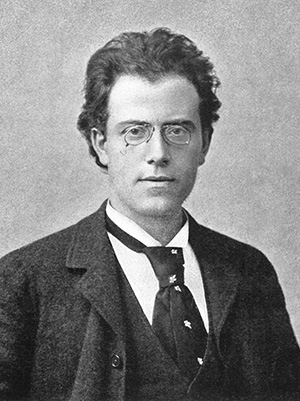 Gustav Mahler (Wikimedia Commons)And all-embracing the emotional turmoils of his Symphony No.1 in D major are. It starts with the silver line of that hushed, very high, and seemingly infinitely long A (lasting almost the whole length of the first movement’s introduction), and almost explodes forty-five minutes later in the Finale’s frenzied visions. This powerful work never misses its target, yet on this occasion – and perhaps as a result of the heightened expectations after the magical first half – its impact was less than cathartic. There were some terrific moments – for example, the sound and elasticity of the off-stage trumpets at the beginning was excellent – but all in all the performance was not as tight in its energy, or as self-evident in its phrasing, as the earlier pieces. The success of this symphony depends greatly on a myriad of subtle tempo changes and the use of agogic accents (being an emphasis given with time, rather than volume); for thinly veiled Viennese waltzes, gemütlich (a word with more atmosphere than meaning) memories of happy times long since gone provide its characteristic taste to much of the music. If those accents sound stodgy at times, or the moody Frère Jacques canon of the funeral march in the third movement gets louder at every new appearance of the theme (expressly against the composer’s instructions), or the accelerated drive to the end of the first movement is less than maddening, then you must relish the spectacular sight of eight horns standing up for the last few minutes (this time, in accordance with Mahler’s suggestion) and the full blast of the triumphant coda, as it is needed to finish the night on a high note.

Sibelius and Mahler (Sydney Symphony Orchestra) was performed at the Sydney Opera House from 25 to 30 October 2017. Performance attended: 25 October.