Some may be puzzled by an exhibition titling itself ‘Thenabouts’. As a portmanteau, the word seems confusingly to displace time onto space. The term was in fact neologised by James Joyce in Finnegans Wake (1939), where a character asks, ‘Where are we at all? and whenabouts in the name of space?’ Joyce coined such seemingly nonsensical terms as ‘thenabouts’ and ‘anywhen’ to conflate temporal and spatial schemas. Rather than accepting each dimension as objectively discrete, Joyce performed a metaphorical inversion as a gesture towards conceiving such categories as elastic, paradoxical, and inextricably linked constructions.

French artist and filmmaker Philippe Parreno borrows Joyce’s term because, like Joyce, he too is drawn to paradoxical conjunctions of time and space. Following on the heels of Parreno’s site-specific installation Anywhen at the Tate Modern’s Turbine Hall, which opened in October 2016 and continues until April 2017, Parreno’s current exhibition at ACMI in Melbourne presents a selection of twenty-eight of Parreno’s films. Running between one to thirty-eight minutes in length, the films screen back-to-back in unpredictable sequences decided each day by the ACMI ground staff, re-threading the thematic and aesthetic correspondences.

Parreno’s temporal and spatial fusions extend to his own practice, as he occupies a space somewhere between artist and filmmaker; situated within the cluster of mostly British and European artists emerging in the 1990s known as ‘post-representational’ (Maurizio Cattelan, Liam Gillick, Douglas Gordon, Carsten Höller, and Rikrit Tiravanija), but also linked to a history of postwar experimental filmmakers like Michael Snow and auteur directors such as Andrei Tarkovsky. Parreno’s films are non-narrative, enigmatic, disquieting – as well as intensely sensual and cerebral. The films show interest in eccentric pockets of cultural history – such as the early development of automata or quasi-supernatural phenomena – but are most obviously inspired by the futurist fantasies and parallel universes of science fiction.

Parreno’s lustrously mysterious C.H.Z. (Continuously Habitable Zones, 2011), immediately conjures the irrational time-warping landscape known as the ‘zone’ in Boris and Arkady Strugatsky’s sci-fi classic Roadside Picnic (1972), later adapted into Tarkovsky’s ruminative film Stalker (1979). C.H.Z. is in fact an astrobiological term denoting the environmental conditions necessary to enable life to exist on planets. Scientists have hypothesised that a planet with two small suns – rather than one large one – would be more conducive to living organisms. The hypothetical effect of two suns on the landscape would be the growth of black vegetation. To this end, Parreno collaborated with the landscape architect Bas Smets in the design of a constructed environment in Rua do Tarrio, Famalicão, near Porto, Portugal that sought to create the illusion of such an alternative world. The cinematography in the film is languorous, slow panning shots over an environment featuring blackened ground, sparkling particles like strange crystals of snow, and a grim-looking forest evoking an alien land or the post-apocalyptic terrain of Cormac McCarthy’s dystopic novel The Road (2006). The soundtrack, with its low thrum like an airplane engine amplifies the film’s sense of foreboding and menace. 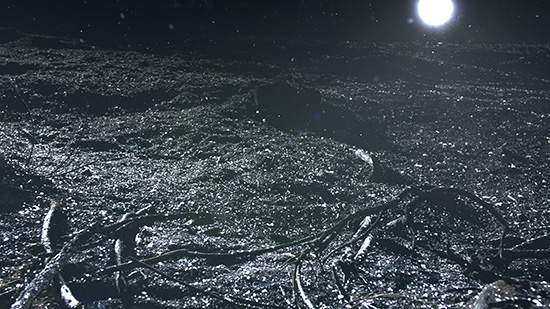 Sound is in fact crucial to the effect of Parreno’s films. June 8, 1968 (2009) is a reconstruction of the journey which transported Senator Robert F. Kennedy’s body from New York to Washington DC on the date the work takes as its title. Installing the camera on the train as it moves in long tracking shots through the rural landscape, the film is animated more by its sound than by its movement; the constant noises made by the train – the clickety-clack of metal wheels on tracks, and the wheezing of its changes in speed. In a subtle detail, Parreno decided to incorporate the soundscape of Flinders Street Station. Fitting train tracks with microphones, he allowed the real-time sounds to be relayed into the cavernous gallery space, mingling with each film’s soundtrack and forming a hybrid auditory environment.

The films dryly reference each other in games in intertextuality. The camera, for example, in June 8, 1968 was carefully placed from what would have been the perspective of Kennedy’s coffin, a conceit which is echoed in Marilyn (2012), hypothetically filmed from the point of view of the deceased celebrity. Filmed in the hotel suite at the Waldorf Astoria in New York where Marilyn Monroe lived in the 1950s, the camera gazes over the hotel’s furnishings, styled to convey the period feel of the era. It moves from room to room but is mostly angled to a writing table where we see a close-up of fountain pen elegantly scribbling across a writing pad. What is most interesting about the film is the artifice that is revealed at the end. As the camera pans out, we see not only that the room is a constructed mise en scène but that the writing is performed by a robotic apparatus programmed to replicate Marilyn’s handwriting. 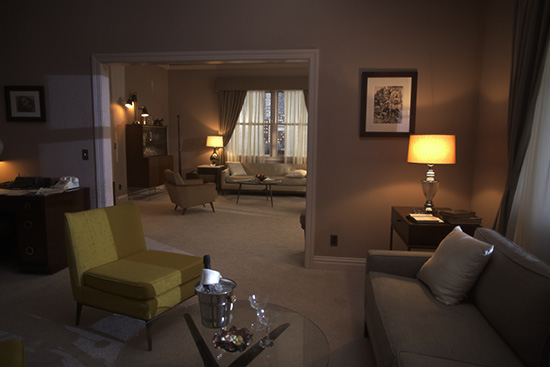 Writing and machines are leitmotifs, conjoined in The Writer (2007), which takes as its subject the eighteenth-century automaton designed by Pierre Jacquet-Droz, often considered a prototype of the computer. The automaton is programmed to write, its mechanical arm repeatedly travelling from inkwell to page as it slowly and woodenly inscribes the sentence, ‘‘What do you believe, your eyes or my words?’ – though the film ends before the line is complete. As in C.H.Z. and June 8, 1968, the soundtrack is overt, the clicking sounds of the antiquated machine in tandem with the automaton’s moving eyes suggesting an otherworldly figure suspended between the living and the inanimate.

The mainstay of Parreno’s films is this very nexus, where the distinctions between the living and the robotic, the historical and the fictional, the rational and the supernatural, blur and abrade in tantalising ways. At the end of the eighteenth century the Viennese physician Franz Anton Mesmer hypothesised forms of energetic transference between animate and inanimate matter, developed through his notion of animal magnetism. Ultimately discredited as occult, Mesmer’s belief in the restorative potential of magnetic forces and invisible channels of energy appears to be resuscitated in Parreno’s filmic universe, where machinic consciousnesses, ghostly presences, and strange forms of agential displacement create a pervasive atmosphere of mesmerising mystery.

Philippe Parenno: Thenabouts is showing at the Australian Centre for the Moving Image (ACMI), Federation Square, Melbourne until 13 March 2017.