The world première in Perth of a new work from a Broome-based performance company was an event of considerable note. Twenty-one years of productions made in West Arnhem Land and then in Broome turns conventional wisdoms upside down in Australian terms. Many people still hold that sophisticated cultural work is made in cities and that regional or remote places yield up worthy or folksy work that belongs in a different register. Marrugeku and their new work rout these prejudices. They have been doing it all along, too, drawing in collaborators from everywhere to build an impressive body of work.

In Cut the Sky we have another Kimberley story, the genre well known if you have followed the development of Aboriginal theatre and music from the west of the continent since the 1980s. It is a particular mode of expression grown from the historical details of a town such as Broome, where Aboriginal land was settled by not only colonial arrivals but also by regional neighbours with a variety of reasons for being there. This is the fertile context that created Bran Nue Dae (1990), the rich seam of performance driven by names such as Chi and Albert and Pigram, and Mary Geddarrdyu. Marrugeku reach further into global arts to find collaborators: from other colonised societies as well as from the centres of European distinction and innovation. In this case, their collaborators are from West Africa, India, and Belgium.

The collaborative partners add to the groundwork of the project with its stories of survival and inquiry, elaborating by example the layers of richness in Aboriginal lives, the traditional threads alongside modernity. In Cut the Sky, the story revolves in the first instance around the community of Nookanbah and, in the second, about climate change and its impact in an ancient country and in the regionweoccupy – not a call to arms but a subtle exploration of custodianship, mythopoesis, occupation, the delicate rhythms of the everyday. It captures the contest of ‘use’ of this country. It is animated in five acts, each of which questions what is above and below the crust of the earth.

Edwin Lee Mulligan, a young artist and writer from Nookanbah, site of a serious conflict about land and rights in 1980, is a remarkable performer and storyteller. He is the centrepiece of the work as a narrator; he also contributes with a riff on traditional dancing. His lines are long, the ideas complex, the delivery softly modulated and deeply compelling. His text covers the contest of land usage, of understandings of country as mother and as commodity. It is a paean to the gifts of mortality and belonging, its counter drive all about danger and the repetition of the havoc that humans can wreak. 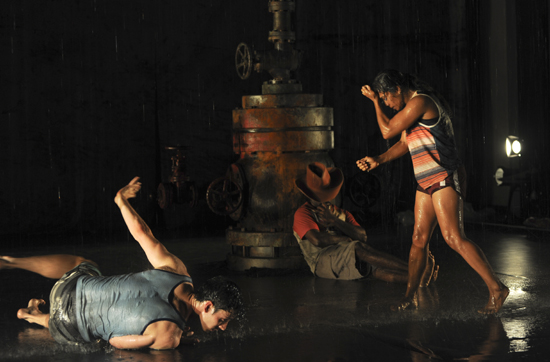 The set design is made up of industrial mine apparatus and a robust screen that takes in aerial and human perspective views of Kimberley country as well as other indeterminate locations for film footage of cyclones and tsunamis to amplify the ideas of climate change. The mantra in the work is ‘when will it rain again?’. Footage is used of the blockade at Nookanbah in 1980, with a recorded message by a patrician Western Australian government minister laying out the ‘what’s ours is not yours’ agenda.

The designers, Deleuzean practitioners who make up a group called Desire Machine Collective, are based in Assam, India.

There is an exquisite moment when dancer Eric Avery steps onto the stage with a violin, plays it in a conventional manner and then shifts it to be the accompaniment for a song he has brought to the production, his Ngiyampaa Song, sung in Ngiyampaa Wangaaypuwan language. The feisty singer Ngaire Pigram, well known for film and theatre work, struts the stage with attitude and sings Nick Cave, Ngaiire, and Buffalo Springfield. It is a wild ride, this music choice and delivery, occasionally jarring, but entirely consistent with the wide range of influences and mixing-up that makes up this work in a provisional and fragmentary mode. Most of it worked for me. 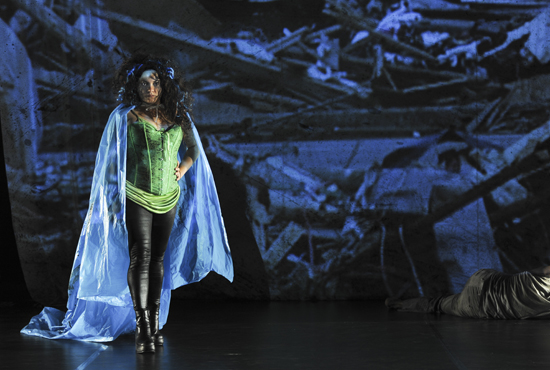 Ngaire Pigram in Cut the Sky (photograph by Heidrun Lohr)

Then there is the dancing with choreography made by Dalisa Pigram and Serge Aimé Coulibaly, Burkina Faso-born and now working in Belgium with his own company and all of the radicals of that dance world. The choreography is electrifying and the four dancers all very fine, but Dalisa Pigram has what seems to be an intensity plug-in installed: she has a tiny body and she generates the most astonishing impact onstage. Her flexibility and poise are phenomenal and she is currently at the height of her beauty and creativity. I cannot see that easing up, either, for a long time: you can tell that she is bursting with ideas. Watching her made me feel dizzy: she is dancing for her life, for her people; she expresses all of the anguish and love that drives this work and its larger set of interests concerning political will and sovereignty and the future for all of us.

Along with the ground-breaking work in Australia that companies such as bigHart are making with innovation in art and social change – where the art is everything and not subservient to the message – Cut the Sky provides critical thinking fodder as well as beauty to contemplate.