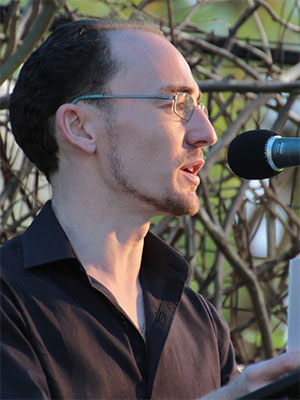 Thom Sullivan is a poet and editor from Wistow/Bugle Ranges in the Adelaide Hills. A short collection of his poems, 'Airborne', was published in New Poets 14 in 2009. Since then he has edited or co-edited seven books of poetry, including Light & Glorie, an anthology of poems about stained glass, with Aidan Coleman. His poems have appeared in The Best Australian Poems 2014, The Best Australian Poems 2015, Australian Love Poems, Cordite, Transnational Literature and Eureka Street. He lives in Adelaide, where he works in public policy.

'Much of Sullivan's recent work belongs to what I like to think of as his colonically irrigated period. I mean this in a grammatical not medical sense: his use of colons as the sole means of punctuation is unique as far as I know. The simple, zen-like 'In Camera' selected for the print edition contains only one crucial, summative colon, but it hints at what is to come: the use of colons, and colons alone, to separate snatches of perception or thought or dream that are tentative and transient, yet not quite disconnected enough for the breath-separation of a full-stop.

They remain, crucially, part of a stream-of-consciousness, the colons keeping everything afloat and in play, in one never-quite-disconnecting sentence.

The effect is cumulative, and subtle, and powerful. There may be no summative end-point in these newer poems; rather, we see a mind at work in the flow of 'qualia', as much circumnavigating its perceptual world as striking a flag at its centre.

'Noumenon' is a favoured word of Sullivan's, but his work might be seen as a dance of both the phenomenon and the noumenon. The poems prod at essences; they are built from small perceptual things, but also – in a Kantian sense – suggest things-in-themselves.'writes ABR's States of Poetry - South Australian State Editor Peter Goldsworthy. Read his States of Poetry introduction here.