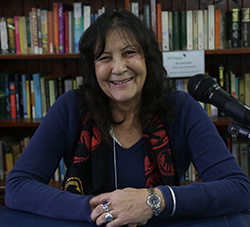 A Wiradjuri woman from Central New South Wales, Kerry Reed-Gilbert has performed and conducted writing workshops nationally and internationally. She was the inaugural Chairperson of the First Nations Australians Writers Network (FNAWN). In 2013 she co-edited a collection of works with the US Mob Writing (UMW) group ‘By Close of Business’, and was co-editor for the Ora Nui journal, a collaborative collection between First Nations Australia writers and Maori writers.

Kerry is a former member of the Aboriginal Studies Press Advisory Committee. Her poetry and prose have been published in many journals and anthologies nationally and internationally, including the Macquarie PEN Anthology of Australian Literature and Southerly. She is a member of the ACT Us Mob Writing group and First Nations Australia Writers’ Network.

In 2006 she received an ‘Outstanding Achievement in Poetry’ award and ‘Poet of Merit’ Award from the International Society of Poets. In 2005 she toured Aotearoa New Zealand as part of the Honouring Words 3rd International Indigenous Authors Celebration Tour. In 2003 she was awarded an International Residence from ATSIAB to attend Art Omi, New York, USA; and in 1997 she toured South Africa performing in ‘ECHOES’ a national tour of the spoken word.

Her work has been translated in French, Korean, Bengali, Dutch, and other languages.

Kerry Reed-Gilbert is a Wiradjuri woman who is a leading figure in Canberra poetry, particularly in the contributions she makes to raising the profile of contemporary Indigenous and Torres Strait Islander poets. Like her famous father, Kevin Gilbert, she writes poems that present what can be a scathing critique of the politics of contemporary culture. But as well as the activist eye, Kerry explores her passion for land, culture, family and humanity.

Kerry Reed-Gilbert reads 'Wiradjuri Country', 'Got ya', and 'Just leave your mark here'