Our Man: Richard Holbrooke and the end of the American century by George Packer

These moments remind the reader that the narrator’s ‘we’, like the title’s ‘our’, is doing a great deal of work, and that America as seen by liberals differs from America as seen by conservatives, and both differ enormously from America as seen by non-Americans. Who are the ‘we’ for whom Holbrooke was ‘our man’? Not the Trump supporters for whom this lifelong habitué of Washington and Wall Street would be an archetypal denizen of ‘the swamp’. And not the seemingly resurgent American left, for whom he would emblematise decades of failed US policies. Holbrooke was ‘our man’ for an élite of policymakers and businesspeople who, despite myriad internal spats (exhaustively chronicled here), stayed remarkably unified around a determination for the United States to actively intervene in the affairs of other nations, but whose influence appears to be waning in the present: hence, ‘the end of the American century’. The overlap between this group and the upper reaches of the US media, including prominent magazine writers like Packer, is considerable (Holbrooke himself dated Diane Sawyer during her ascent to evening news stardom).

Holbrooke’s entry into this world combines merit, ambition, and chance. Not himself born to power and privilege, Holbrooke happened to go to high school with the son of the future Secretary of State in the Kennedy administration, Dean Rusk, who encouraged him, once he had an Ivy League degree in hand, to join the foreign service. This took him to Vietnam and face to face with ‘America’s first losing war’. Once back in Washington, he assiduously cultivated relationships with the grandees of the foreign policy establishment, above all W. Averell Harriman, who held a panoply of important diplomatic and governmental offices, but whose power was greater than the sum of his posts. Before entering government, Harriman used his vast inherited fortune to help establish the banking firm Brown Brothers Harriman; among the other founding partners were his Truman Administration cabinet colleague Robert A. Lovett (Harriman was Secretary of Commerce, Lovett was Secretary of Defence) and Prescott Bush, future senator and father and grandfather of the Presidents Bush. When the defeat of the Carter administration ended his tenure at the State Department, Holbrooke emulated this earlier generation of statesmen by embarking on a desultory-seeming twelve years at Lehman Brothers; later he would earn millions of dollars using his networks to ‘open doors’ for Credit Suisse.

One of the remarkable things about this book is how unexceptional all this seems to Packer (and his narrator): their energy is absorbed by the spectacle of Holbrooke’s ascent and by the obstacles he placed in his own path through his monumental ambition, underhandedness, and self-absorption. But a non-American reader is moved to ask: is it normal for a nation’s foreign policy élite to be so coextensive with its financial élite? Is it desirable? Could the recurrent failure of US foreign policy to live up to its stated ideals have something to do with simultaneously pursuing a version of the national interest defined in dollar terms?

Not so for Packer: throughout, he imputes a liberal idealism to Holbrooke that is only partly exemplified by his actual behaviour (which included praising Indonesian President Suharto for his human rights record during the occupation of East Timor, and advising John Kerry to support the invasion of Iraq for the sake of his presidential ambitions). The conceit of this book is that, just as the ugly side of Holbrooke’s personality was as much the precondition for his achievements as his idealism, so have America’s naïveté (Packer uses Graham Greene’s term, ‘innocence’) and vaulting ambition produced both triumphs, like the Marshall Plan and the peace at Dayton, and catastrophes like the wars in Vietnam and Iraq. In this new era of Trumpian isolationism, Packer concludes by asking a reader who, he concedes, will already know ‘every failing’ of America in the world: ‘don’t you, too, feel some regret?’

Maybe. But perhaps the end of the American century provides an opportunity for a more thoroughgoing reassessment than the one offered here, along lines suggested by the book’s title. It is peculiar to invoke the shade of Greene with a title like ‘Our Man’, only to dispel it the way Packer does when he comes to discuss The Quiet American (which Holbrooke had read before going to Vietnam):

My god, Greene loathed Americans. Our bathrooms were air-conditioned and our women deodorized and we were too shallow to know good and evil. It was a left-wing Catholic’s version of the usual British upper-class snobbery … But I have to admit Greene was onto something in Vietnam. The intensity of his animus made him clairvoyant.

It wasn’t Greene’s putative loathing of Americans that make him clairvoyant; like Joseph Conrad and George Orwell, he had a long acquaintance with empire and the way that it encourages its practitioners to sublimate self-interest into lofty principle. The essence of American innocence, according to Greene, was a lack of the sense of irony that could catch that sublimation in the act, a trait that Holbrooke seemed to share. One has the sense throughout of Holbrooke’s indomitable voice talking over any critic; yet, the achievement of Packer’s prose is such that it still feels like a voice worth hearing and arguing with.

Benjamin Madden is a scholar of modernist literature, educated at the Universities of Adelaide and York. His work has appeared in the Times Literary Supplement and other outlets. He is the former editor of Modernism/modernity, and presently teaches literature at the University of Adelaide. 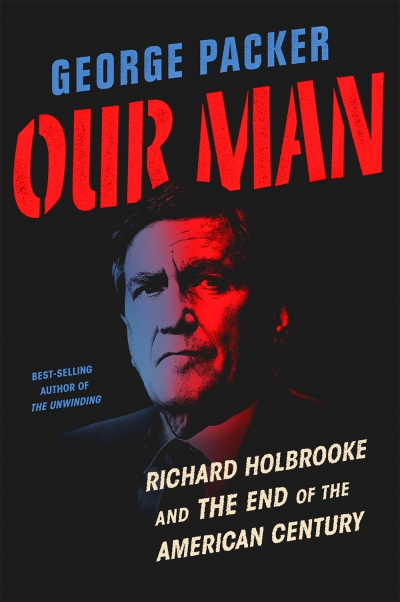