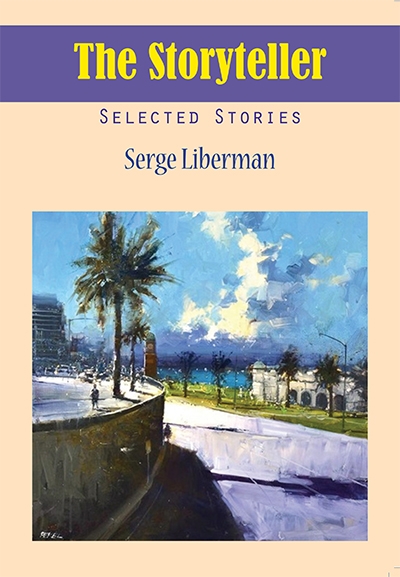 When I look at certain images of German-born photographer Roman Vishniac, the accompanying pain is acute, for his mesmerising monochromatic portraits of Eastern European Jews before their devastation in the Holocaust are not mere ethnological studies. Elie Wiesel refers to Vishniac as ‘poet of memory, elegist of ruined hopes’ in the foreword to A Vanished World (1983). The same might be said of Serge Liberman, as attested to by the twenty-eight works that form The Storyteller. Within these stories a particular world is revisited, one on the brink of disappearing; the fractured community of those Jewish refugees who found home in Australia. There is also the robust reality of their burgeoning families.

Along with the despair elicited by the magical conjuring act of Liberman’s writing – for these survivors cannot help but evoke all who were lost – is pleasure in these characters’ familiarity. All are carefully wrought: their preoccupations, angst, the rich cadences of a language that encapsulated the poetic, the ribald, and the depths of suffering, the folkloric tales of rabbis, peddlars (as evoked by Sholem Aleichem before him), dybbuks, and Jewish mothers who appear alternately as adored figures singing Yiddish lullabies or characters who are less benign.

Humour sometimes emerges, but there is always the keen recognition that this fraught relationship between parents and children – whose young bodies flourish in the free expanse of the Australian landscape and who cultivate Australian accents – are marked by silences around words as chasmic as ‘Auschwitz, Bergen-Belsen, Treblinka’. One of the child narrators (‘The First Lesson’) wonders at his mother’s adjuration to ‘Go, eat something!’ when his grandmother has just died. ‘Eat? Now?’ he silently rails. But what else is there to say in the face of this terrifying loss of her mother, with whom she survived the unutterable?

Liberman’s family came to Melbourne as postwar Jewish refugees in 1951. During his writing career – he published six short story collections – he won the Alan Marshall Award thrice and was a recipient of the New South Wales Premier’s Literary Award. This posthumous collection – Liberman died in 2017 – has been edited by Professor Richard Freadman and writer Alex Skovron as a celebration of his work and in the hope of resuscitating his literary reputation. Liberman, despite recognition from Australian writers such as Skovron and Arnold Zable, has gone the way of many writers. Earlier this month, publisher Peter Mayer died. Mayer, remembered for his daring decision to publish The Satanic Verses when CEO at Penguin in the United States and the United Kingdom, countered the idea of fashionable writing: ‘The real issue ought to be, is the book readable, is it valuable, is it good? Who cares if it’s old or new?’ When it comes to publishers and readers, the answer is undeniably; too many.

The Storyteller teems with humanity and often grapples with questions of life, meaning, and belief. Like the European tradition which he admires, Liberman does not shy away from these topics or styles, often shunned in the Australian environment because of their serious-mindedness, dramatic content, and intellectualism. Liberman dallies with modes like the macabre in ‘Raphael Lazurus, The Painter’ and a comedic uncanny in ‘Keinfreind’s Golem’. In the former, the artist cannot help but portray his subjects in their future states of decay, thereby imposing these fates upon them. In the second, a wealthy art dealer creates a Golem to guard his treasures, but finds himself subsequently trapped by his own greed.

Among these characters, not all of them Jewish, are two recurring figures; the doctor and the ‘scribbler’. As they go about on their house visits, these doctors observe their patients intimately. These often empathic physicians are compassionate voices of reason, like their Chekhovian forebears. They leave the reader wondering at the evolving clinical nature of the medical profession and what the subsequent toll has been for both parties. Some of these doctors find themselves confronting serious crises of belief.

The ‘scribblers’ appear in various stages of their careers and states of success. Some write in Yiddish, others in English. A struggling shoemaker’s literary talents are revealed when his ambitious son, a stalling writer, discovers his notebooks and realises that his perceptions of his father, ‘a little man, with little ambition, little talent’, were erroneous (‘Envy’s Fire’). A respected writer holds court with other writers and poets in the Cosmopol Café on St Kilda’s iconic Acland Street until he is accosted by an unlikely messiah (‘Messiah in Acland Street’). And a young boy, who might and might not be Serge, is advised by his Yiddish teacher that his ‘duty lies in telling of everything that this generation’ have lived through; warning him not to be mired in the past. This is ultimately Liberman’s feat, rendering in resplendent though precise language the humanity around him with vivacity, and sometimes embracing pessimism. As the doctor narrator declaims silently in ‘Jewel in the Crucible’, so did the writer: ‘Let them come, I thought let them come. For humanity I am ready. / I am ready. / I am ready. / Let them come.’ Russian poet Marina Tsvetaeva once wrote, ‘I don’t eavesdrop, I listen attentively. Just like a doctor does: the chest.’ One suspects that Liberman’s considerable talent derived from his ability to do just this, both as doctor and writer.