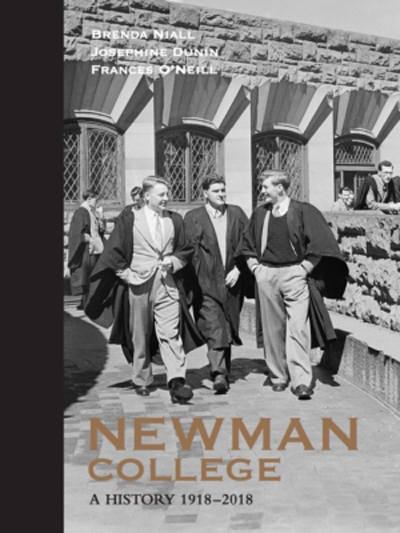 Drive along College Crescent, the circular avenue that forms Melbourne University’s northern order, and you will see the series of sedate, handsome university colleges that line the edge: Newman, Queen’s, Ormond, Trinity, plus the newer women’s colleges of St Mary’s, St Hilda’s, and Janet Clarke Hall. The impression today of quiet élitism and learning may be just, but the weathered stone has seen some turbulent times.

This is especially true of Newman, the first as you approach from Swanston Street, where its entrance is, but by decades the last of the four church colleges and the most controversial in its formation and architecture – a revolutionary design by Walter Burley Griffin, architect of Canberra. For more than six decades – as Trinity hosted Anglican students, Ormond Presbyterians, and Queen’s Methodists – the space set aside at Melbourne University for Catholics lay vacant. It was used by Catholics for picnics, the Carlton Football Club held matches there, and a herd of cows was pastured there until their lowing disturbed the sleep of the Master of Trinity College.

The arrival of Daniel Mannix – archbishop from 1917 to 1963 – in Melbourne in 1913 was the turning point. He believed that the way for Catholics to take their rightful place among the leaders and professionals was via the secular university. With Mannix, an irresistible if permanently irascible driving force, the largely working-class Irish Catholics got their own university college. In 2018, Newman College’s centenary, it is easy to overlook how vital a role it played in lifting Catholics in Melbourne, giving them confidence and opportunities.

A glamorous and beautifully produced history by three Melbourne historians – sisters Brenda Niall and Frances O’Neill, and Josephine Dunin – offers a refreshingly forthright account, including controversies and confrontations. It may be vanity publishing – the publisher is listed as Newman College – but it is lavish, meticulous, and marvellously illustrated with evocative photos from across the college’s history. It is an important record of the progress of Catholics in Melbourne from largely Irish and poor to occupation of the professions and social equality, told through the experiences and anecdotes of a century of students.

Newman was based on the bounty of a Sydney philanthropist, Thomas Donovan, who detested the Griffin’s design and never set foot in the college, but exercised a strong and often irritating influence on college policy, especially the bursaries he generously funded. (Gerard Murphy, the wise and urbane rector for three decades, solved one potential confrontation by having Donovan’s portrait painted and hung in the dining room.)

By the time Newman opened, the Irish Mannix had become a deeply divisive political figure because of his support for Irish nationalism (including the 1916 Easter Rising) and opposition to conscription. Just a week before 40,000 people turned out to see the college opened on 24 March, thousands of Catholics had marched up Collins Street to the steps of Parliament House where Mannix awaited. A counter-demonstration days later by supporters of empire and conscription demanded that Mannix be deported.

From the start, Mannix had the Jesuits in mind to run Newman (as they still do), though his hard-nosed demands made negotiations difficult. The intention was to provide opportunities ,especially for poor and rural Catholics, but for much of its history – the authors say – Newman was both élitist and not particularly academic, with sport outranking study. Although scholarships helped, Newman was peopled for decades largely by students from Xavier College, St Patrick’s in Ballarat, and St Kevin’s.

Newman benefited from some outstanding leadership, especially by the first (acting) rector  Father James O’Dwyer, who comes across as generous-spirited and intelligent, Father Jeremiah Murphy (1923–53), and the current rector, Bill Uren, who had a stint from 1986 to 1990 and took over again in 2006. One nice story indicative of Murphy’s character is when a group of students amused themselves by changing places at the dinner table with a group from another college; ‘he didn’t expel the intruders. Instead, he subjected them to an inordinately long Grace, in Latin.’

The book focuses on the controversial ‘initiations’, which often involved liberal applications of water by ‘bucketing’ or ‘ponding’. Some took this in their stride, some found it unpleasant and bullying. One student, whose suit got soaked, appeared in another suit which was also soaked. The perpetrators could not believe their luck when he appeared in a third suit, only to be told that the suits were their own. Father Uren ultimately changed and softened the initiations to a more acceptable ‘orientation’.

Credlin was a beneficiary of Newman’s decision to go coeducational in the late 1970s, the last of the Melbourne University residential colleges to do so. The transition was made more difficult by the loutish behaviour of many male residents, the book recounts.

There are two howlers: the book has Russia invading Germany in 1941 rather than the other way round, and George Pell as archbishop of Melbourne in 1989, seven years early.

Newman’s story can be read many ways, the authors conclude. One is a Catholic success story in Australia’s social history; an alternative is generations of ‘young men getting drunk and keeping their minds closed while doing just enough study’. They prefer to read the history as ‘a story of struggle, which isn’t resolved, but which is about becoming open’. Newman College is certainly opened here.