Apart from its value as a case study in bureaucratic corruption and incompetence caused by lack of proper oversight, Missing in Action serves as an important reminder that the trauma of Australia’s involvement in World War I did not end with the Armistice. The appalling loss of life was compounded by the ineptitude and fraud associated with the initial official attempt after the fighting had ended to identify human remains and to afford a proper burial to each of the more than 46,000 Australians who had died on Western Front. It was an enormous task; even a century later, it is far  from complete.

According to Marianne van Velzen, there are 11,000 Australians whose remains are still to be identified. Van Velzen is a Dutch-born journalist and historian whose previous books include a biography of travel writer Ernestine Hill and Bomber Boys (2017), a history of the RAAF’s 18th Bomber Squadron, which operated during World War II and whose pilots and aircrew were drawn from a group of Dutch and Australian former POWs who had escaped from  the Japanese.

The tone of Missing in Action is different from that of Bomber Boys. It is shocking, though perhaps understandable given the sensitivities of that era, to learn that the full scandal of the short-lived Australian Graves Services unit was hidden from the public. No one with significant involvement was ever held to account for the AGS’s failures, and  those politicians in the know were unwilling to make an issue of the débâcle.

Beyond the report of a secret Court of Inquiry that was instituted in 1920, it seems there is not much for historians to go on. A previous official report had been discredited following allegations of bribery by AGS officials. The Court of Inquiry found that members of the Australian Graves Services had been operating without adequate accountability: ‘Supervision of these parties is difficult and no definite record of the work is readily obtained beyond the report of the party itself. Opportunity for abuse is great and unless the most rigid discipline is maintained this work intended to sanctify and hallow the memory of the dead must develop into a serious scandal bringing humiliation and  disgrace upon the Australian Forces.’

‘Up to the date of investigation by this Court of Inquiry,’ continued the report, ‘no reasonable or definite plan of carrying out the work seems to have been formed, and many of the officers and men selected did not realise the dignity and importance of their position.’

The AGS was staffed by Australians staying on in Europe after the war, who, for one reason or another, were disinclined to return home. Australians were known to own bars called estaminets, which offered sly grog and prostitutes. Joining the AGS offered the chance to continue wartime black market activities and get something for nothing. Rorting was rampant, and large amounts of cash  and equipment simply disappeared.

Meanwhile, the work that was done to identify remains and establish cemeteries was haphazard at best. Graves established by the AGS were found to contain the wrong body, or else they were empty. The public face of the AGS was Alfred Allen, a civilian with the honorary rank of major, derived from service in the Red Cross. Allen claimed to be able to locate the bodies of Australian soldiers using a divining rod. With this device, Allen was said to find up to 100 bodies in a week. Allen was a genial Quaker whose air of respectability seems to have forestalled serious scrutiny. Reputed to possess near miraculous powers of detection, Allen was fêted in the newspapers. Van Velzen writes that ‘The photos used to illustrate these articles showed Allen as a somewhat jovial and assuring fellow; the information that this God-fearing man did not drink or swear, and was held in high esteem by his men, did a lot to set at rest the minds of those who had questioned the functioning of the AGS.’

Without modern forensic techniques such as DNA matching, the identification of corpses – often torn apart by explosives – that had been dumped hastily in mass graves was a haphazard as well as gruesome and time-consuming task. Allen’s impressive success contrasted with the much slower rate of positive identification achieved by the British authorities.

Bereaved families desperate for closure were vulnerable to false consolation, though there were doubts about the AGS expressed by family members – some of them wealthy and influential – who felt that they were being deflected or misled. Complaints that Allen and his colleagues were being evasive and uncooperative multiplied as Australians increasingly visited France in search of lost soldiers. Following the damning report by the Court of Inquiry, the AGS was quietly disbanded and its members allowed to fade away. While the story it tells is confronting, Missing in Action provides a necessary counterbalance to platitudes about the mateship of the diggers or stories that namecheck  certain outstanding military leaders.

Many Australians still struggle to comprehend the full horror and utter waste of World War I, preferring narratives that appear to offer some uplift. We tend to speak of the diggers as heroes and good blokes rather than as crooks and hoaxers with no sense of duty towards their fallen comrades, though in fact there were a few individuals like that. 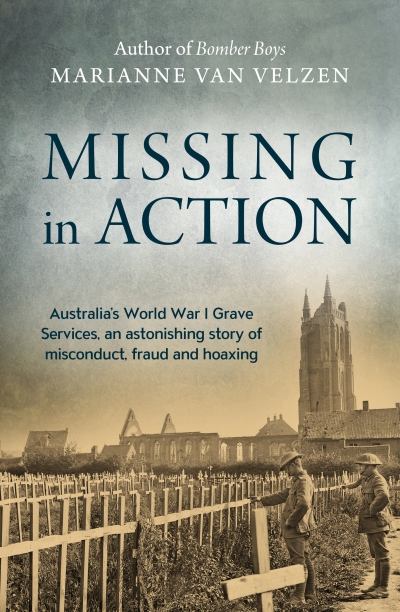