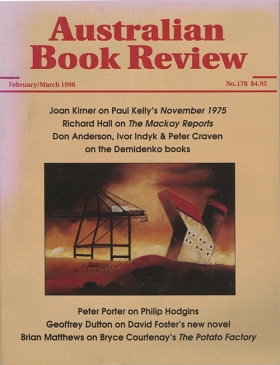 Welcome to the February–March 1996 issue of Australian Book Review. 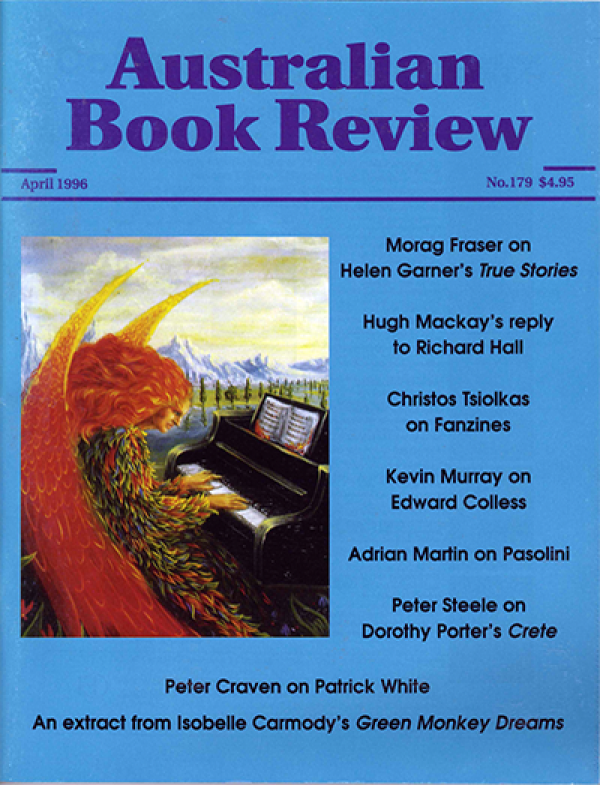 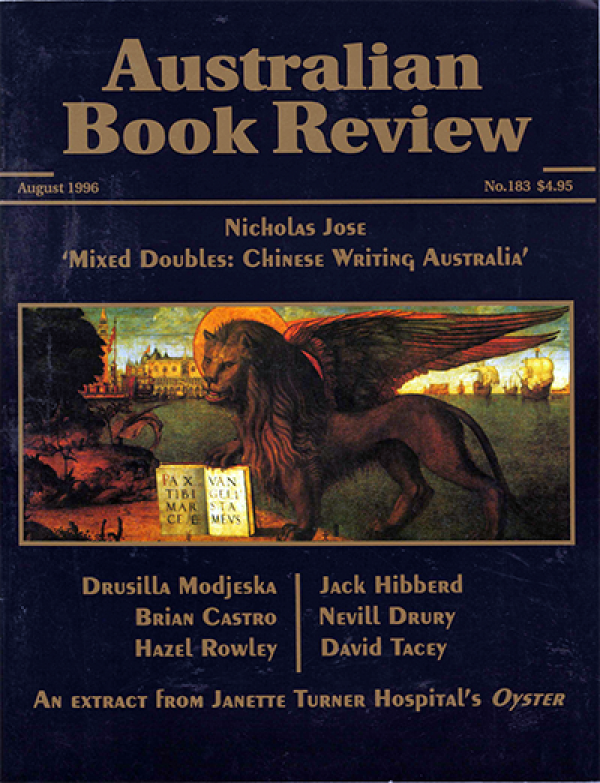 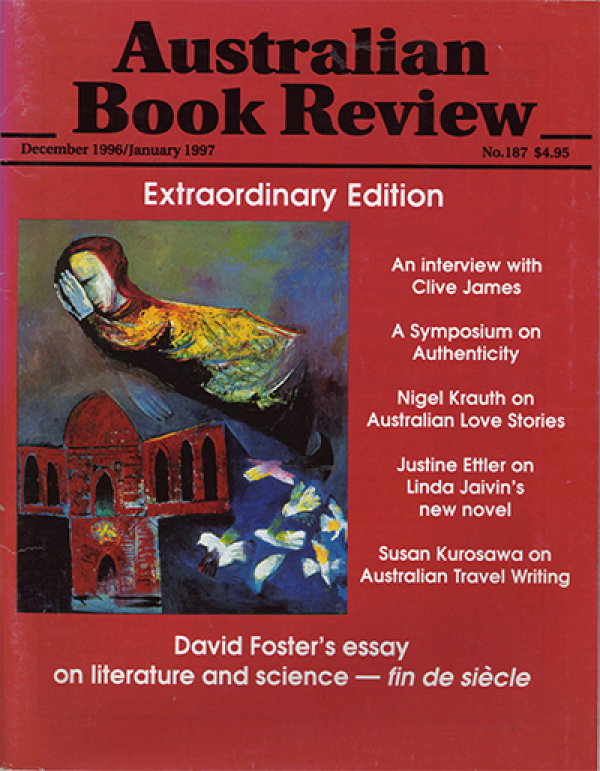 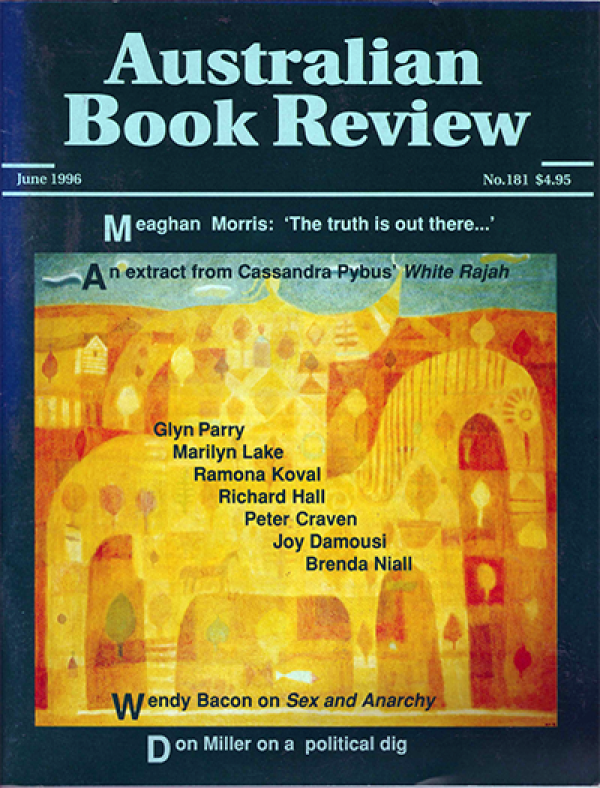 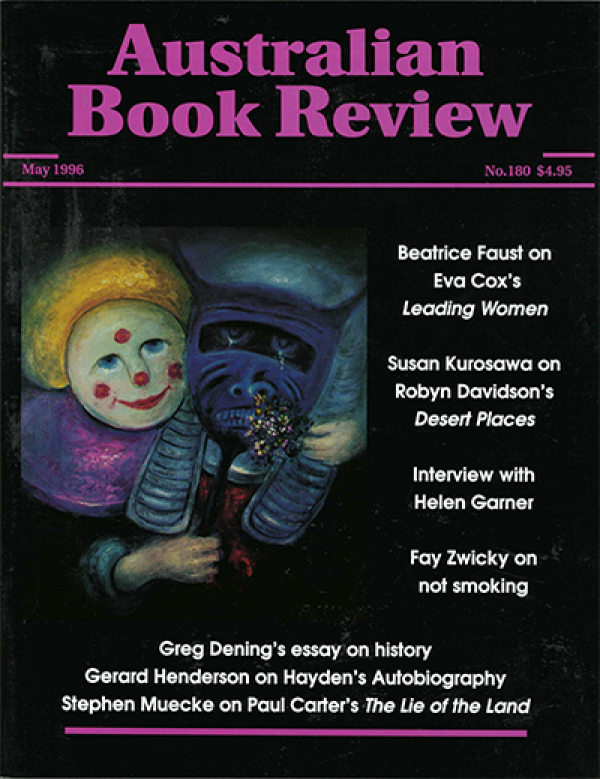 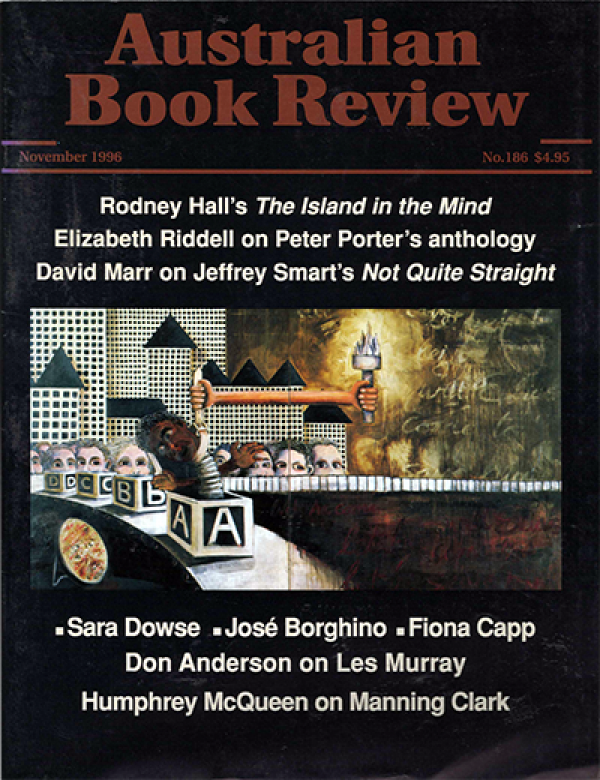 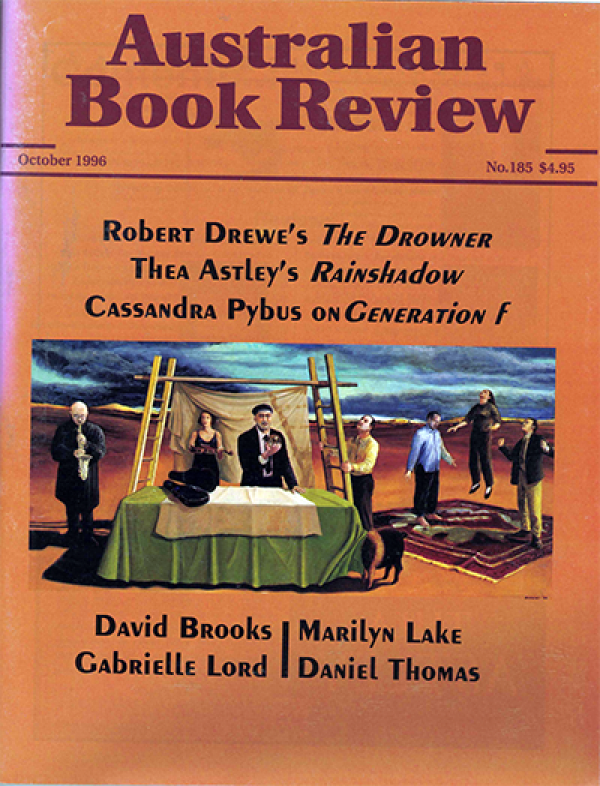 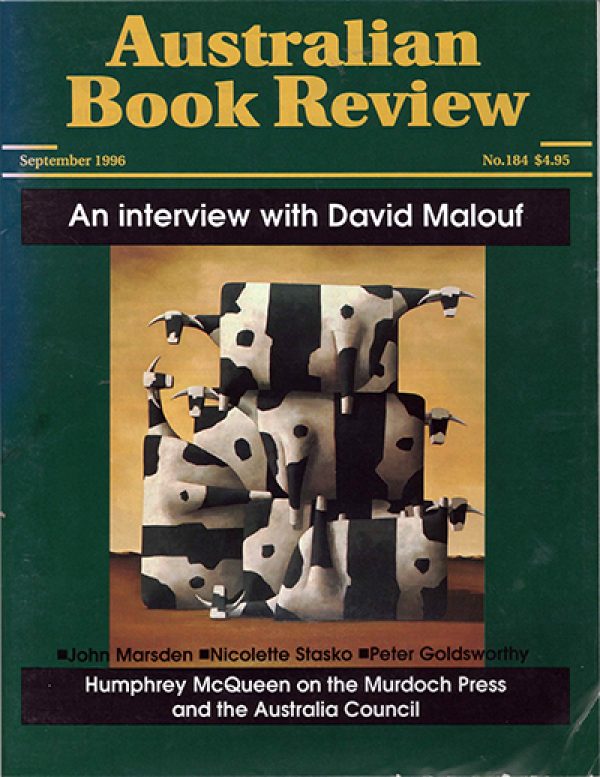 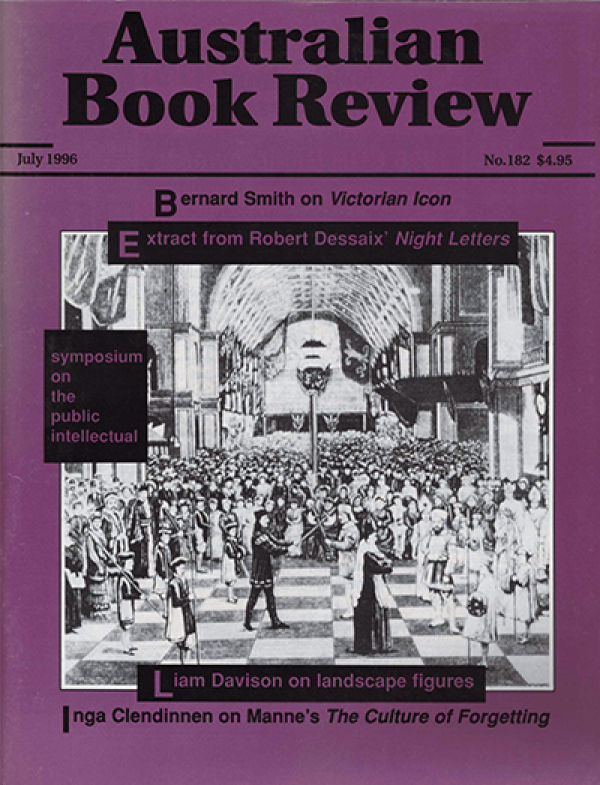 The two books reviewed here, although very different in many ways, do have one thing in common – they have something to do with a secret, which the readers, and the protagonists, all come to know.

Sophie Masson has written a number of books about the Seyrac family, in which she draws on her own French heritage. In this, the fourth, changes come to the family as Maman works to finish her book and Papa is full of plans to open a restaurant with the children’s uncle and aunt who are to emigrate from France. Florence, the eldest of the children, discovers that all is not always as it seems and that people’s appearances can be deceptive. It comes as something of a revelation too, that she might be like Polichinelle and not always as clever as she thinks she is, as she is forced to acknowledge that Andy, the unwanted member of her working group at school, writes better than she does.

As the one hundred and sixteen years of their control of the Exhibition Building ends, its Trustees have prepared this splendid account of their stewardship. From diverse perspectives David Dunstan, who teaches public history at Monash University, and fifteen associates, demonstrate how deeply the building has entered into the everyday lives of Victorians. Dunstan begins by noting that:

Two hundred years of European culture have not seen many places in this continent invested with anything like the meaning given by Aboriginal people to their sacred sites. But this building, could be one of them … if we gather together a mixed-age group and ask people about their recollections, then the images and memories surface in animated conversation: examinations; shows – the Motor Show; the Home Show; RAAF trainees during the Second World War; the Motor Registration Branch; The Royale Ballroom … the Aquarium.

Artful Histories represents that extraordinary achievement – a learned critical study, based on a thesis, which is exhilarating to read. While it covers the expected ground, with careful accounts of Australian autobiographies of various types, it also addresses a core problem of current literary debate – the relative status of different literary genres, and the interrelation between writing and life. There is no mention here of The Hand That Signed The Paper or The First Stone (they are beyond the range of the discussion) but McCooey’s elucidation of the relationship between autobiography, history, fiction, and life bears directly on the issues which have kept Australian readers arguing over the past year. At the end of his chapter on autobiography and fiction, McCooey summarises the difference in a seemingly simple statement: ‘Fictional characters die fictionally, people die in actual fact.’ The implications of this are far from simple, and McCooey argues for the maintenance of the boundary between genres on the grounds of moral responsibility.

Don Anderson reviews 'Before I Wake' by John Scott

As for this letter you describe – so explicit, so extreme, that at the moment of its first description the reader might ejaculate across its pages-is it not the condition to which all writing has aspired? Demanding that admission of desire (no matter how unlikely, how unspeakable), an honesty, so absolute it would produce a masterpiece.

John A. Scott, What I Have Written

John Scott (the ‘A’ that appeared on earlier books has been dropped) is not only aware of gender-difference and its implications for representation but makes it part of the concern of his narrative. The poems by the fictional Danielle in Before I Wake are attributed to the actual Melissa Curran. The storytelling of this novel is split between several characters, masculine and feminine, and the latter, significantly, have the last word. Scott acknowledged the complications here involved in an interview with the editors of Scripsi (Vol. 2, Nos. 2 & 3, Spring 1983), speaking of From the Flooded City.

Because men use words to oppress, their language is very much in counterpoint to the speech of women. By constantly keeping on searching for the answer to things, the men get as much information as they can out of the women and in the process of doing this kill them. They drain women dry in the search for meaning thereby destroying the meanings of their own answers.

This is as pertinent to Before I Wake as to From the Flooded City (1982). Scott’s novels and poems usually take the form of searches, often of detective narratives (see St Clair: Three Narratives, revised edition 1990), and linguistic as well as epistemological not to mention ontological searches inevitably involve translation, a central issue for Scott (see Translation, 1990). Indeed, any attempt to confront gender difference involves a sort of translation. Given that translation involves reading at least ‘two’, this also is pertinent to Scott’s novel, with its ironies and betrayals and ambiguities: it is a novel that rewards if not requires re-reading. It is, like a translated text, different though the same the second time around.

The settings of the novel, involving the travels of lapsed writer Jonathan Ford, switch from Thirroul to Paris, to southern England, to northern Tasmania. The sense of cultural dislocation, of linguistic and cultural strangeness, that Jonathan experiences is germane to the novel’s intellectual concerns as to its eminently humane plot. This is not merely the most accessible of Scott’s books; it is also the most conventional. It may also be the richest. It is in some ways the most shocking, because of its life/art confrontations. While the final sentence of its two pages of ‘Acknowledgments’ acknowledges that ‘Before I Wake is a work of fiction, Scott, whose fiction at large embraces the epistolary mode, has two paragraphs earlier avowed that ‘Violet’s letters are drawn verbatim from the letters of my mother, Violet Scott.’

These are harrowing letters, and provide a possible explanation for the adult behaviour of Jonathan, the fictional son of the fictional ‘Violet’. They provide a different order of representation from the merely fictional (e.g., the relations between Danielle and her incestuous father, Malcolm Richardson) accounts of abuse that pervade the novel. They, and their deployment, are truly shocking, for the reader as well as, doubtless, for the author. (In what is not merely a parenthesis, it ought be observed that the ‘Acknowledgments’ are crucial to the book, and their being placed at its end rather than its beginning no less crucial. Connoisseurs of acknowledgments and notes may care to reflect how Helen ‘Demidenko’ might have fared better had she provided copious notes, while Frank Moorhouse’ s fate at the hands of the Miles Franklin judges might have been different had he provided less substantiation.)

Abuse, especially the abuse of children, and its consequent deformations of the adult, is at the heart of this novel. The historical figure of James Bulger, the Liverpool two-year-old, features, as does the fate of the Algerians at the hands and garrottes of French gendarmes. Like recent work by Garry Disher and Christopher Koch, this is a post-Vietnam novel, another site of abuse. Scott, through his painter Richardson, is also concerned with that form of rhetorical abuse known as ‘Critical Theory’, and its vagaries. In his account of the first experiments in viticulture in northern Tasmania, Scott renders the abuses of parochialism in a way I had previously encountered only in American fiction. The novel embodies the lines from Apollinaire that serve as epigraph to its first section: ‘at every moment I could weep/Over you over her whom I love over everything which has frightened you.’ Which may be why, at its end, the novel celebrates reconciliation and forgiveness.

Readers familiar with John Scott’s earlier prose, poetry, and volumes that are an amalgam of the two modes, will not be surprised to encounter in Before I Wake a stylistically scrupulous novel, a tour de force of control. In Scripsi, he articulated ‘the sort of things I write about’:

What immediately came to mind ... were the notions of search, of loss, of impossibility, and something generally to do with Romantic love. Loss is a very important part of it. ... This made me wonder whether I’ve ever expressed any positive things in my work at all. I seem to be able to articulate failure in myriad forms.

Geoffrey Dutton reviews 'The Glade Within the Grove' by David Foster