‘I just read a history of bricks.’

We learn about the ways our teachers have influenced us over many years. As an undergraduate student at the University of Melbourne, I took every class taught by Professor Peter Steele SJ. More than a decade after I first sat in his office, and only days after his death, I recall a statement he made almost as an aside during one lecture. The class was on travel writing. Not the popular genre, where narratives of Tuscan revelations or adventures on the trans-Siberian railway abound, but a more ragtag bundle of texts: The Odyssey, The Travels of Sir John Mandeville, and, a particular favourite of Steele’s, Gulliver’s Travels. He wrote his doctoral thesis on Jonathan Swift, a fellow priest with an appetite for the world’s many wonders.

The reading list for Steele’s class was already an odd selection, but his casual statement in class that he had been reading about bricks revealed a world of reading that lay before me. A lover of fiction and poetry, I had devoted almost all my reading to these genres, dipping liberally into the literary essay along the way. But here was a radically different suggestion: a history of bricks; essentially a history of the buildings we construct that are meant to last. I thought of the different character of homes made of red brick, and those made of yellow brick. I pondered again the Yellow Brick Road of Oz. Later, when reading of Timbuktu’s mud architecture, and when visiting adobe pueblo sites in the American Southwest, I thought again of this history of bricks. How like the Peter Steele I came to know over a number of years to understand the world from the perspective of the materials with which we build it. In various library catalogues, I have looked up the subject of bricks, and a number of books have come up. I have often wondered which volume he read, and am sorry I never asked him. I am grateful, however, that he introduced me to the work of, among many others, Mandeville. The weird account of this knight’s travels eastward into an increasingly wild and unrecognisable medieval world is one I have returned to often, both in imagination and on the page.

Another text Steele revealed to me was the poem ‘Matthew XXV: 30’ by Jorge Luis Borges. He often brought a poem to class, projecting it on a transparency, and talked us through the reasons why the poem impressed him. Borges’ poem ends with the following lines:

… In vain have oceans been squandered on you,
in vain the sun, wonderfully seen through Whitman’s eyes.
You have used up the years and they have used up you,
and still, and still, you have not written the poem.

These final four lines, he said, never failed to humble him, to haunt him – and they have come to have the same place in my own life. I read those lines and reflect that every poem I have written fails, somewhere – is still not the poem; will probably never be that poem. Yet when I read last year’s Best Australian Poems, I was struck by Steele’s poem ‘The Knowledge’. In its gentle gathering of worldly phenomena and its almost serenely contemplative mood, I felt that this poem distilled so much of what I loved about him as a poet. I read it and thought: ‘He has written the poem’ – that is, the poem that, for me, most simply represented his poetic voice and concerns. Ever questioning that knowledge which was his life’s quest, the poem ends ‘No end of wisdom: but what does a frog / in a well know of the waiting ocean?’ The ocean had not been squandered. I wrote him a letter to tell him how much I admired the poem.

I remember, too, the day he told me of his diagnosis, now several years ago. It was before I moved to the United States to study at Georgetown, a move I may not have made if I had not been Steele’s student. I already knew he was sick, and wanted to see how he was feeling. When I arrived at Newman College he was waiting outside the gates. In a nearby café he told me frankly and clinically of how his illness had been discovered.

As ever, he was interested in talk of other things. I told him that Susan Stewart’s book Columbarium, which I had just read, contained four words that were new to me. Looking them up, I was pleased that Stewart had – of course – used them correctly, and thus taught me, better than the dictionary, how they should be used. This seemed to amuse him. We spoke of Elizabeth Bishop, and I said casually, ‘Bless her heart.’ He paused, and then with both amusement and gravity, then finally his priestly gentleness, agreed, ‘Yes. Bless her heart.’ I told him that I had recently taken up trapeze lessons. He told me, ‘I often think of you as gravity defying.’

Remembering that last statement, and a number of other things he told me over the years, I feel that, perhaps, I have not defied gravity enough; nonetheless, I like to think that Peter would be pleased to see how my interests have broadened and broadened over time, and that each time I deviate from the literature area of a bookstore or library to another set of shelves – science, history, theology, philosophy – it is not a little because of him. I am certain I am just one of the many students to whom Peter Steele delivered a much richer vision of the world.

Kate Middleton’s first collection Fire Season was published by Giramondo in 2009, and won the Western Australian Premier’s Award for Poetry. She holds an MA in literature from Georgetown University and an MFA in Poetry from the University of Michigan. From 2011–12 she is the inaugural Sydney City Poet.

Below we reproduce Peter Steele’s late poem ‘Maze’, which appeared in our June 2012 issue:

But wait, there’s more – as when the hummingbird
flies backwards for the hell of it, or
the odd flamingo’s pinkened up by snacking
on blue-green algae. Aeschylus, potted
by a dropped tortoise, was one unlucky Greek –
from the same stable as Melvin Purvis,
who pioneered belching on national radio.

Were you an ant you’d start the day by stretching,
and, at a pinch, have a big yawn;
were you a cricket you’d listen through the slits
of your eager forelegs: were you, alas,
a white shark, you’d never take sick but always
be hungry: and if a caterpillar,
you’d boast to the end a couple of thousand muscles.

The ermine in white is the weasel in brown, and the chow
the only dog with a black tongue:
mice were sacred to Apollo: a camel-hair
may be a squirrel’s tail: the mosquito’s
wings are thrashing a thousand times a second.
If you look for the only crying creature –
or laughing come to that – consult a mirror

and find, your mind bested by wonder, your eyes
lit up again at the starry torch,
rue and its makings, something of jubilee,
the shot-silk of the hours. Better,
as the man said, to keep on dreaming small,
than see given to dissipation
the friends, the stoves, the newspapers, the birds. 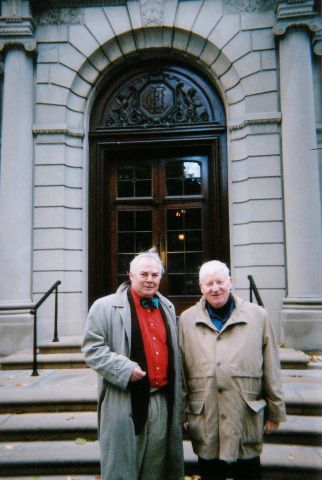 Patrick McCaughey and Peter Steele at the Fricke Museum
Tweet