It is ironic that Annie Baker’s 2014 Pulitzer-Prize winning play about one of the last American cinemas to use a 35-millimeter projector is being revived by Red Stitch, whose theatre is opposite The Astor, the classic Melbourne cinema that was recently sold and will soon be transformed into a twenty-first century digital ‘palace’.

Red Stitch first performed The Flick last year, as part of the Melbourne International Film Festival, so this is a return to home turf. Nothing has changed: cast, director, and design remain the same. Book now, for tickets are selling fast. (Several critics extolled this outstanding production in ABR’s Arts Highlights of the Year, January–February 2015.)

Baker’s writing has been described as ‘hyper-naturalistic’ – her dialogue mimics the mundane exchanges people share every day. Not much happens. Baker’s characters are quintessentially ordinary, often with menial jobs and thwarted ambitions, the forgotten flotsam and jetsam of America. Baker’s acute eye for detail sketches these losers with humour and compassion. Their loneliness and lack of fulfilment contrasts with the fast-paced, winner-takes-all society in which they struggle to survive.

Here, the movie theatre is a metaphor for broken dreams. This is perfectly reflected by Shaun Gurton’s set, a replica of a faded, grungy cinema. It is slightly unnerving, as an audience member, to see a mirror image of theatre seating in front of you, which intensifies identification with the characters in the play. From time to time, the projector in the booth at the back focuses a stream of bright, white, unrelenting light as the features roll on. Another touch of irony: the films projected, filled with glamour and adventure, could not be more different from the lives of Baker’s trio of misfits.

Sam (Ben Prendergast) is a thirty-something cleaner who still lives with his parents. Stuck in a rut, he secretly lusts after kooky Rose (Ngaire Dawn Fair) who is ten years younger and as the projectionist, one rung higher up the job ladder. Rose has told Sam that she is gay. This doesn’t stop her from teasing him by remaining tantalisingly aloof. They are joined by Avery (Kevin Hofbauer), an African American college student taking a break from study due to personal problems. Tellingly, there is a poster of Jules et Jim on the wall, and when the play’s soundtrack (a cleverly chosen mish-mash of Hollywood themes) includes Jeanne Moreau singing Le Tourbillon, you know much of the plot will revolve around the shifting emotional landscapes between these three.

The men sweep up scattered popcorn and Subway wrappers. Throwing them in the bin, they curse the crass public they have to clean up after. But here the similarities end. There is an understated rivalry between Sam and Avery from the beginning and Prendergast excels as the bluff, older man who longs to assert his authority and make something of his life, only to find the road blocked. Their power play is also a class struggle. Avery is middle class, Sam a blue-collar worker. Sam taunts Avery with a variation of the game, ‘Six Degrees of Kevin Bacon’. What’s the film connection, Sam quizzes Avery smugly, between Pauly Shore and Ian Holm? Avery, a film-obsessed nerd with encyclopedic knowledge, trumps Sam each time.

‘It is slightly unnerving, as an audience member, to see a mirror image of theatre seating in front of you’

With his big, black-framed glasses, nervous blink and awkward broom handling, Hofbauer’s geeky, gawky Avery is pitch-perfect. One of the most moving scenes in the play is a monologue where he talks on his mobile to a friend who has moved interstate. Avery is floundering; he aches for affirmation. Maybe this is as good as it gets, he moans; it’s pointless to wish for something better. But his friend hangs up and Avery is stranded in the darkening cinema.

All three are desperate for connection, but cannot communicate. Sam won’t look Rose in the eye when he finally tells her he loves her; Avery hides insecurity behind intellect and his dogged, pedantic belief in the superiority of 35-millimeter over digital. Sometimes these façades crumble. In her characterisations, Baker’s directions are specific. Rose has a green rinse through her uncombed hair, and wears shapeless, baggy trousers, and sweatshirts, as though she is concealing her essential self behind her clothes. In a clumsy attempt to seduce Avery, she puts on a CD and launches into a frenzied, erotic dance that exposes her innermost desires and vulnerabilities. This is a world away from the blasé Rose we’ve seen hitherto, with her flirty pouts and nonchalant slouchings. This is Ngaire Dawn Fair’s moment. The audience on opening night broke into spontaneous applause when she finished her routine and collapsed, panting. 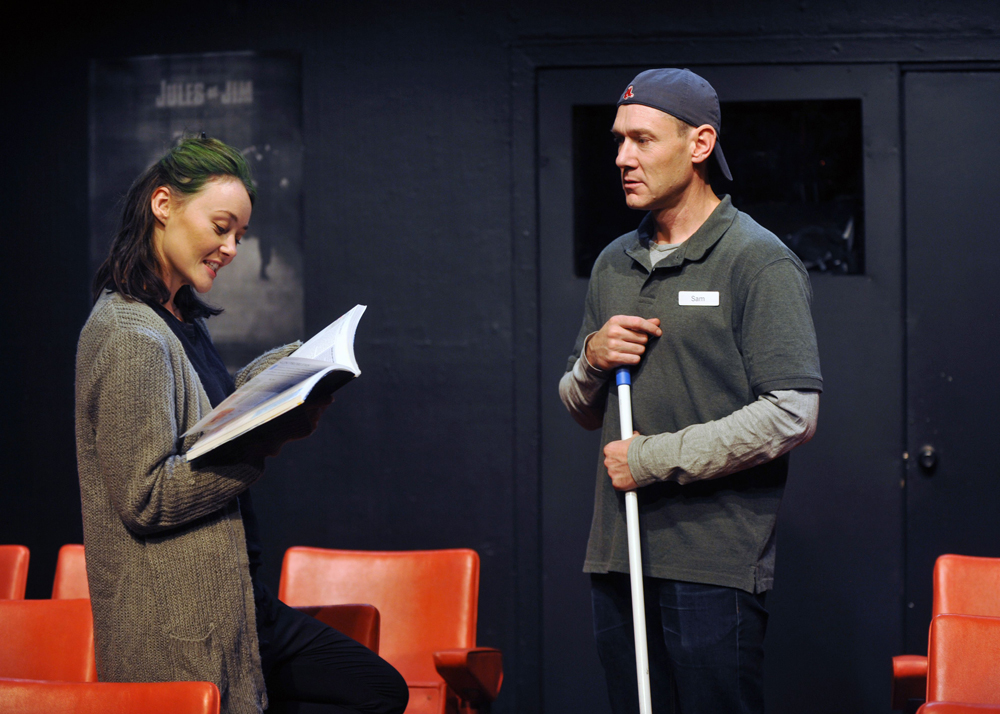 The play’s filmic quality is reinforced by a series of short scenes, fading to black in between. Dion Mills makes two cameo appearances, first as a wino who falls asleep in the stalls, then, after the cinema has been sold to a digital chain, as a cleaner with a quick-fire broom technique and a fascination with the silver screen – quite literally, as he reaches his hand out to touch it, almost hypnotised. This disconnect between reality and aspiration lies at the heart of the play, as well as the gulfs between the verbal and non-verbal. In Baker’s snatches of banal conversation, what is left unsaid is often more powerful than dialogue itself.

Nadia Tass’s direction, smart and sure-footed, elicits performances of nuanced restraint and ensures that the expressions flitting across the actors’ faces do much of the talking. My only quibble concerns the length of the play: at two hours and fifty minutes (including interval), The Flick could do with a prune. Nonetheless, it remains engrossing, satisfying theatre.

The Flick by Annie Baker, directed by Nadia Tass, performed at Red Stitch Actors Theatre, until 23 May. Performance attended 1 May.