Shakespeare’s Julius Caesar, first performed in 1599, is deeply interested in the difference between sleeping and wakefulness, if sleeping is equivalent to wilful ignorance and being awake means political consciousness. Characters throughout the play can’t sleep, won’t sleep, sleep on stage, are roused from sleep; they dream, and their eyes open and close, put to an eternal sleep. Before officially joining the conspiracy to murder Caesar in the Capitol, the play’s hero Brutus receives three letters from the conspirators Cassius and Casca entreating him to open his eyes to Caesar’s tyrannical aims: ‘Brutus, thou sleep’st; awake’. Once awake, it is his duty to ‘Speak, strike, redress’. The play’s language of sleep is strikingly similar to twenty-first century discourses of wakefulness – whether a woke sensitivity to issues of social justice, or the rioters at the United States Capitol shouting, ‘Wake up to the steal!’

Kip Williams, director of the Sydney Theatre Company’s new production of Julius Caesar, is acutely aware that the play is caught between an distant past and our political present. In his Director’s Note, Williams writes that he ‘was shocked again and again by the echoes and reflections in this work of an ongoing cycle of power struggle across history’. This production situates the twenty-first century political problems of cynical political machinations, vicious rhetoric, and mob violence along an historical continuum, starting with Julius Caesar’s statues of self-promotion strewn across Rome and ending with retail politicians directing the camera angles that best capture their pontifications. In the production’s coup de théâtre, Geraldine Hakewill performs Mark Antony’s ‘Friends, Romans, countrymen’ speech over Caesar’s corpse, seamlessly transitioning her costume from toga and sandals to white suit and high heels. The speech itself suddenly mutates into modern political rhetoric, which Hakewill delivers with the same rhythm and cadences of Shakespearean verse: ‘we will fight them on the beaches’, ‘the lady’s not for turning’, ‘ask not what your country can do you for’, ‘yes we can’, ‘drain the swamp’, ‘I don’t hold a hose, mate’. 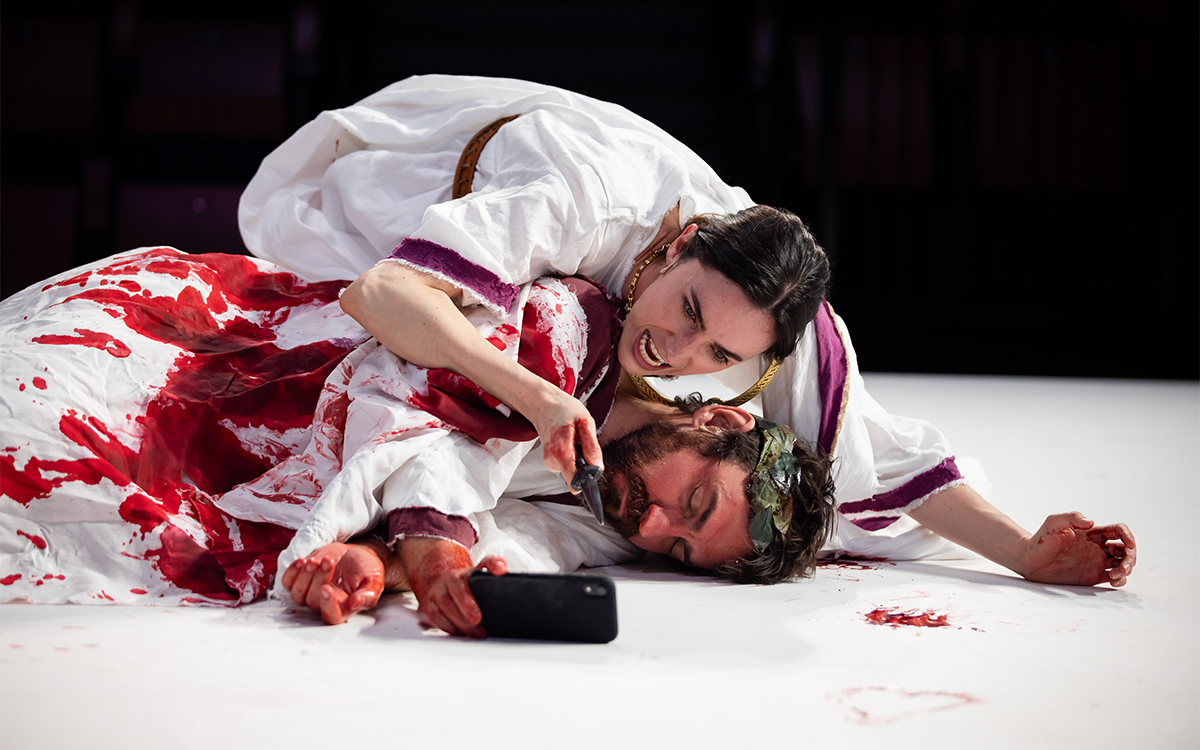 At this point the production descends into total political satire. Williams thus nicely solves the problem of the play’s anti-climactic second part. Once the play builds to the crescendo of Caesar’s assassination, it is easy for the audience to lose concentration while waiting for Mark Antony and Octavius to avenge themselves upon Brutus and Cassius. The usual anti-climax of Brutus’s death is rectified by a production conceit similar to Williams’s use of multiple video screens in the STC’s recent The Picture of Dorian Gray: an enormous ascending and descending cube hovering above the stage, where the actors ceaselessly project their live recordings of themselves and each other from their iPhones.

In the first half of the production, the omnipresent cube feels like a distracting gimmick with the actors’ arms always outstretched with their smart phones, faces constantly projected in enormous close-ups. The cube keeps the audience focused on the broadcasts above the stage. As a result, it’s difficult to admire the three actors’ bravura performances of all the play’s characters. But perhaps that’s the point; we can’t close our eyes to the 24/7 news cycle. In the second half, the cube’s manic effect pays off, alerting the audience to the disturbing ubiquity of violence in devices that live in our pockets. After the insurrection, the cube projects a montage of riot scenes, glib texts sent between Mark Anthony and Octavius, footage from the Middle Eastern wars, pro-Mark Anthony TikTok conspiracy theorists, awkward Zoom meetings between the generals, and Cinna the Poet’s murder live-streamed on YouTube. 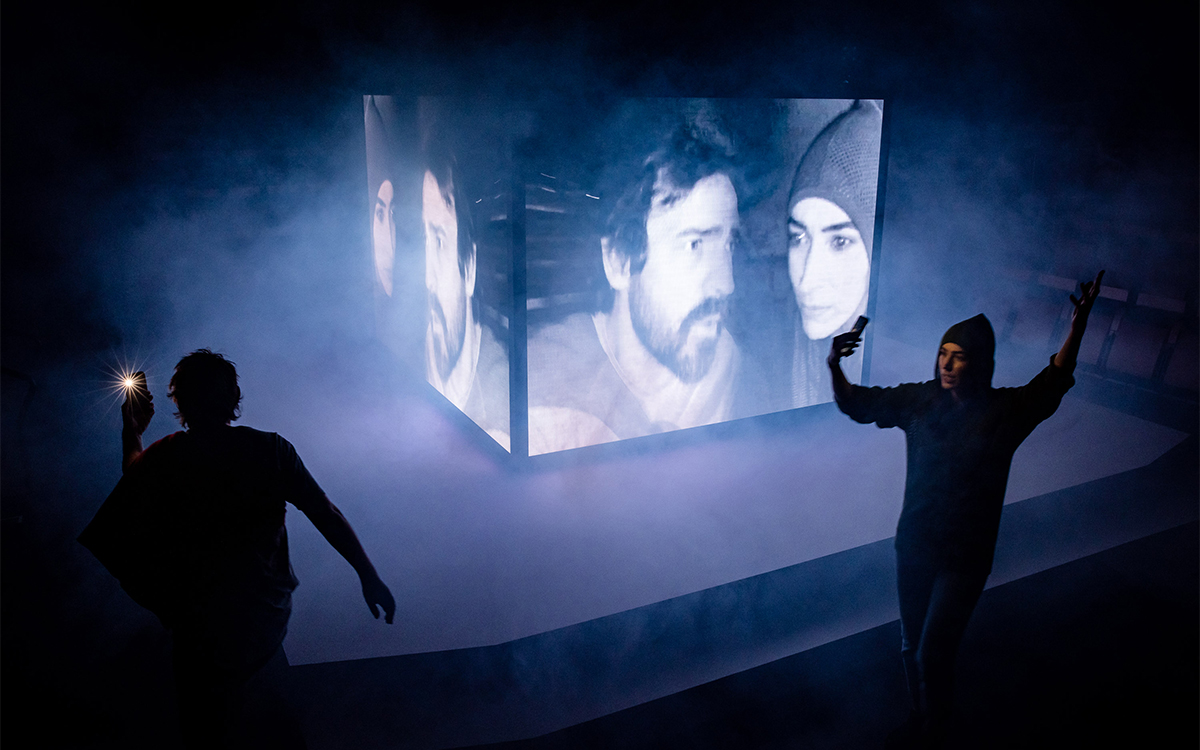 The production deftly alerts the audience to our own complicity with a culture of rhetorical violence. Brutus cannot see the irony in his statement that the conspirators should ‘carve’ Caesar ‘as a dish fit for the gods. / Not hew him as a carcass fit for hounds’. Dish or carcass, they are still committing murder. Caesar’s murder is not enacted in front of the audience, but pre-recorded and projected onto the cube, with the three actors taking the parts of all thirteen senators. There is something maniacally playful and video game-like about the performance, each actor running up to Caesar and landing staccato-like stabs upon his body. (Some audience members were even giggling.) Afterwards, once the cube ascends and the actors are again revealed, Brutus, played by Zahra Newman, and Cassius, played by Ewen Leslie, roll around in Caesar’s blood laughing. A scene or so later, when the lights come up during Mark Anthony’s oration to the people of Rome, the audience realises that they are the bloodthirsty plebians rooting for murder. But while the production implies that our rhetorical violence gives way to physical violence, it also ignores the fact that the power and beauty of Julius Caesar is reliant on the very rhetoric being critiqued.

Although this technically and satirically adroit rendering of Julius Caesar is a lively reflection on our times, its entertainment value comes at the cost of the play’s central ethical problem: is the ‘noble, wise, valiant and honest’ Brutus right to kill the ‘colossus’ Caesar, whom he loves? The play’s power comes from its ambivalence; it’s unclear whether Caesar really is a tyrant or if Brutus is just a hypocrite. In this production, Caesar is performed by Leslie not as the man who loves the Roman people and his friends, but as a sweaty, crazed narcissist who deserves to die. The drama at the centre of the play – the social and personal costs of murdering a friend and leader – is nullified by a production that aims only to make the play topical. Ultimately, while Kip Williams cries havoc and let slip the dogs of war, what is lost is a moving human story of love, friendship, and betrayal.

Julius Caesar (Sydney Theatre Company) is being performed at the Wharf Theatre from 15 November to 23 December 2021. Performance attended: 19 November. 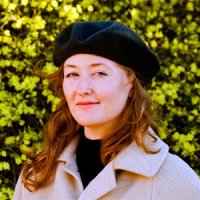 Gabriella Edelstein is a Sydney-based academic and writer. She is Lecturer in English at the University of Newcastle, where she teaches early modern drama and literary theory.

Gabriella Edelstein is a Sydney-based academic and writer. She is Lecturer in English at the University of Newcastle, where she teaches early modern drama and literary theory.