A shift in the European mind is taking hold. The stable democracies of Germany and the Netherlands contrast sharply with an unstable France and a demagogic Italy. The northern tier has an increasing authority, politically and culturally. Art historically, the Amsterdam–Berlin axis challenges the hegemony of the Paris–Rome accord. The reopening of the Rijksmuseum in 2013 after ten years of closure brought Amsterdam back as a major centre of the European imagination. The ‘new’ Rijks, restored by the Spanish architects Cruz y Ortiz, is a miracle of coherence and has placed The Golden Age of Dutch Painting of the seventeenth century, primus inter pares with the national schools of the period. The Dutch changed and reordered the categories of painting. Landscape and still life took their independent paths; genre painting and cityscapes became widely practised; interiors, domestic, and ecclesiastical, as well as marine painting, won new practitioners and collectors; the double or paired portrait added new life to portraiture, as did the group portrait of merchants and militia. All became part of the body politic of Western art.

Last year I had another revelation, humbler but no less telling. I revisited the Kröller-Müller for the first time in thirty years. It looked tired curatorially – too many minor pictures undercut the major works. What transfixed me this time, however, was the Hoge Veluwe National Park – fifty-five square kilometres of it surrounding the museum, formerly the Kröller-Müller’s hunting estate. By a bonne chance our tour fell through. The company scrambled and found someone to drive us the eighty kilometers from Amsterdam in his Mercedes limo. Theo, who knows and loves the Park, drove us extensively through it on our way back. An historically preserved landscape, sparingly logged and cultivated, the sandy dunes, scruffy woodlands, and open heath instantly recall the landscapes of Hobbema. His rutted roads are gone, but the tangled waterways and gnarled oaks are still in situ. As the light falls on an autumn afternoon, you pass through a seventeenth-century landscape.

Good Dutch collections abound outside the Netherlands – Paris, London, Berlin, Washington, and New York to finger only the most obvious. They are largely taken for granted; a pleasant blur surrounding the peaks of Rembrandt, Vermeer, and Hals. A similar fate has overtaken the remarkable collection of seventeenth-century Dutch (and Flemish) painting in the National Gallery of Victoria on St Kilda Road, quite the best in Australia, unlikely ever to be surpassed. To my shame, I too had fallen into ‘taking the Dutch collection for granted’. So, on a Monday morning in February 2019, with Jan Senbergs, a leading Melbourne painter, I set out to look again, more intently this time, at the seventeenth-century Dutch and Flemish collections.

The Rembrandt Cabinet housing them is spacious enough, if a tad gloomy. Maybe that’s appropriate enough if you start as we did with David Teniers’ sullen Skittle Players, with its lowering skies. Oppressiveness seeps into the picture despite its breadth – twice as long as it is high. The tavern yard where the skittle players while away their hours of idleness is cramped and sunless. Across the stream which divides the work suggestively, the industrious housewife bends to her laundry. No comfort here: the outhouse is propped up, and the bank is muddy and unattractive. Everyone who writes on Dutch art starts with the realism of the school. You can count the nine skittles clearly and not fail to mark the earthenware flask of wine accented with a gleam of light. Admiring the realism only takes you so far: it is the present-day quality of the scene which holds our attention.

It takes time to read Dutch genre paintings properly. They are discursive fictions, none more so than Jan Steen’s The wedding party, a munificent gift from James Fairfax. Nothing embodies so well the crowded world of seventeenth-century Holland. Men and women, young and old, partygoers and sceptics, jostle uncomfortably together. Steen catches out the viewer, placing an old woman between the aged husband and youthful bride. She stares balefully out at us, a counterweight to the fiddler who turns and leers suggestively at us.

The portraits come as a welcome relief from this claustrophobic world. Thomas de Keyser’s Frederick van Velthuysen and his wife, Josina, a gift from Melbourne financiers Lynton and Nigel Morgan, bears the polish, confidence, and worldliness of Amsterdam at the height of its mercantile power. The shimmering blacks of the satin and embroidered costumes, the finesse of lace collars and cuffs, and the imperturbable gaze of the wealthy couple make this a potent sleeper in the collection, a civilisation mirrored in a single image. Small wonder Rembrandt took note of this accomplished master, ten years older than himself, when he first moved to Amsterdam. 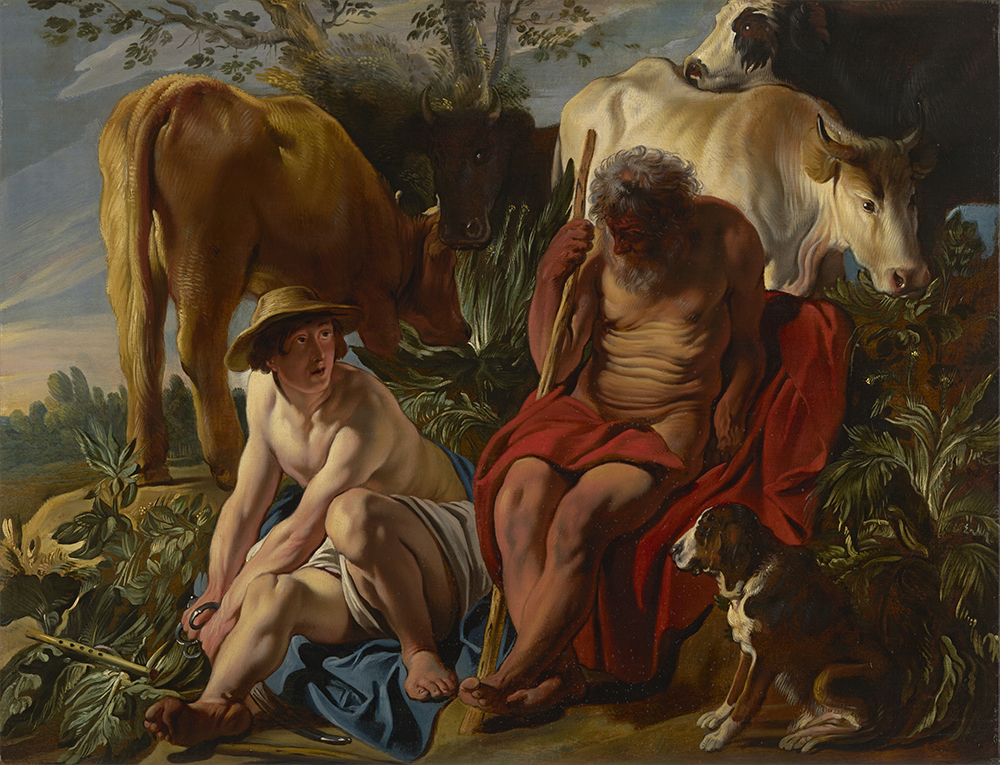 We enjoy slowing down and reading the pictures carefully. ‘The satisfaction of getting closer to the work and hear it speak,’ as Jan later remarked. None more so than with the Jacob Jordaens, Mercury and Argus another major gift from James Fairfax. The Jordaens, an autograph replica of a famous earlier work of his (now in Lyon), has the high polish, luminous colour, and Ovidian subject of a courtly art, painted under the compelling aegis of Peter Paul Rubens, markedly Flemish. It is a most sinister work. The youthful, athletic Mercury, messenger and henchman of Zeus, reaches for his well-hidden sword preparing to behead the sleeping Argus (‘old man with wrinkled dugs’). It upends the pastoral convention of placid heifers, seated dog, and verdant resting place with its incipient violence. But you have to look carefully: Mercury draws his sword stealthily, never taking his eyes off the snoring herdsman. His intent gaze and sun-dappled body distract the viewer from looking at his right hand which grasps the hilt of the sword. The other holds the scabbard so that he will draw the blade noiselessly … a goosebump moment in the Gallery.

Jan and I turn to the marvellous group of landscapes almost in relief. In Hobbema’s Old Oak, you could indeed be driving out of the Kröller-Müller through the Hoge Veluwe National Park. The sandy road runs around the pond and leads the eye through the landscape, passing the solitary horseman and the couple on the far side with their cart. Jan, a powerful and expressive painter of trees, seizes on the old oak and its evocative combination of live and dead branches. It is a monumental presence in the landscape combating the overcast sky, shadowing the pool. Jan, alert to Hobbema’s poetry, notes that we look from a shaded foreground to a perfectly lit middle ground. 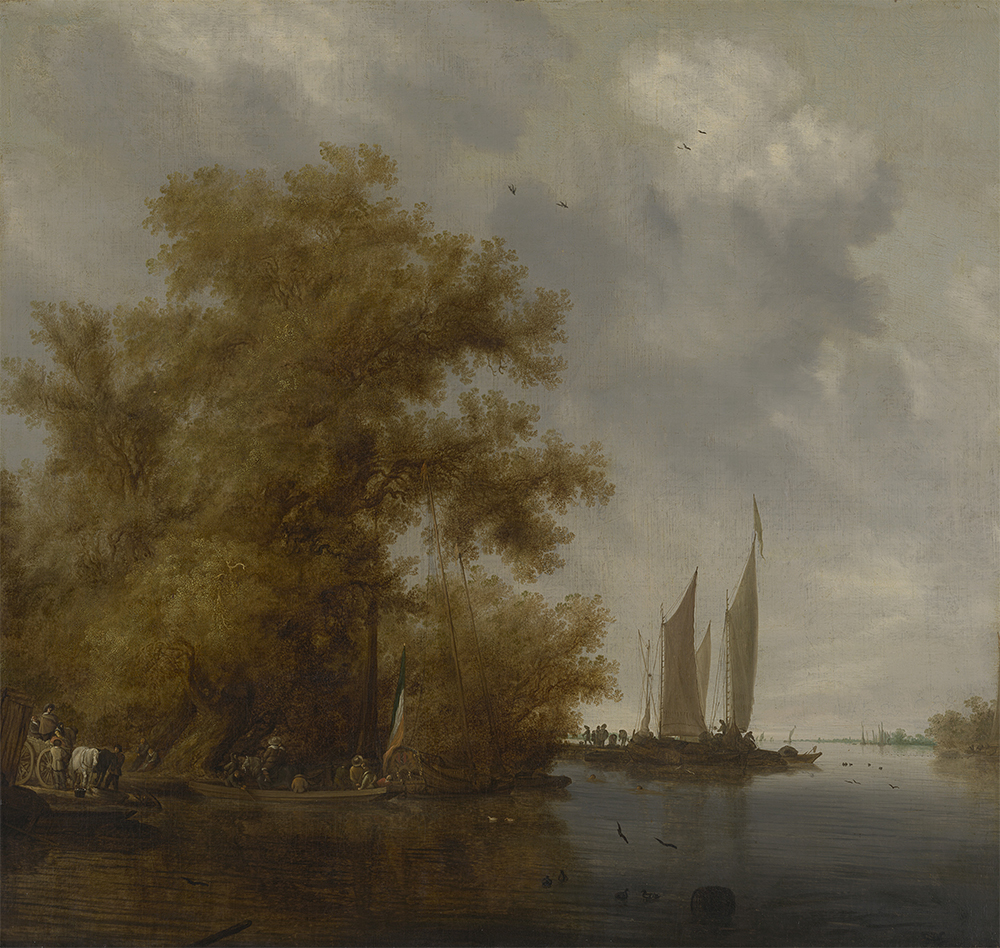 Salomon van Ruysdael’s River Landscape with Boats, one of the Gallery’s aces, hangs adjacent to the Hobbema. Ruysdael’s decision to use a vertical format for a landscape, at once extensive and intimate, guarantees its originality. Jan is immediately drawn to the stand of trees on the left. Their green-gold tonality – light passing through foliage – creates the palpable atmosphere. The quartet of voices – sky and water, distance and light – elevate the painting to the first rank in Dutch landscape. Eugene Fromentin in his classic text The Old Masters of Belgium and Holland (1882) records ‘the visible movement of air through space’ as a central attribute of the school. Nowhere better can this subtle observation be seen than in the Melbourne Ruysdael. Its ever-changing sky looks forward to Constable and his belief that ‘the sky is the chief organ of feeling’.

Jan and I have left the Melbourne Rembrandts for last – what an extraordinary ensemble they make! A masterpiece from the outset of his long career, Two old men disputing, with its wordless disputation of fingers and hands right in the centre of the panel, matches the confident portrait of the ‘blond man’ from his final period. Between them is the vivid Self-Portrait, not autograph but fascinating. Thanks to some astute curatorial and conservational research by Ted Gott and John Payne, we now know that the support came from a bolt of canvas used in Rembrandt’s studio for other (autograph) works. That is to say, the Self-Portrait was painted by a gifted assistant under the demanding eye of the master himself. 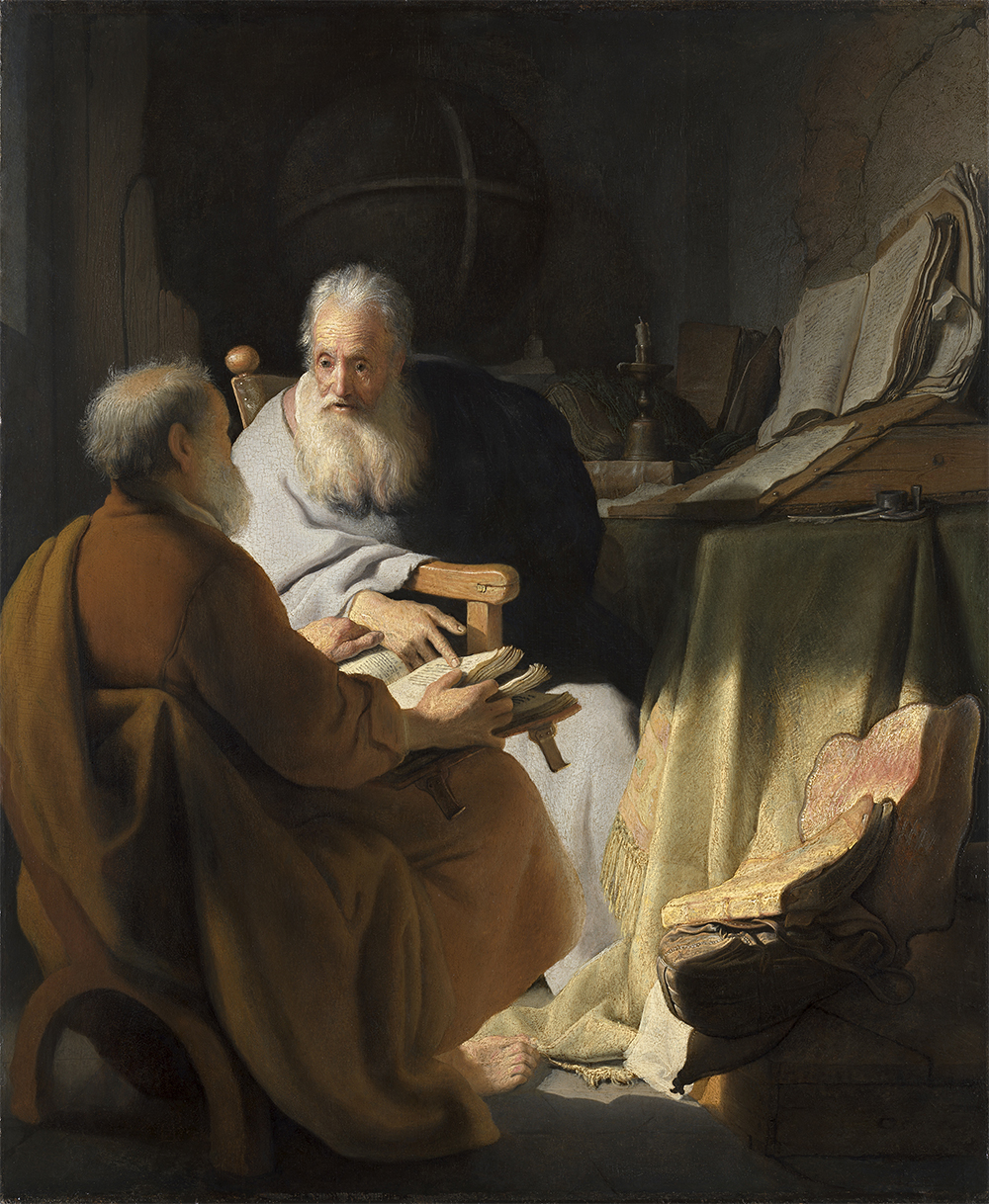 John Poynter, in his masterly history of the Felton Bequest, tells the teeth-grinding story of Frank Rinder, the London-based adviser in the 1920s who was offered Vermeer’s Girl with a red hat (National Gallery of Art, Washington, DC) and reluctantly turned it down. Why? Rinder had recently taken a beating over the acquisition of the putative Jan van Eyck Ince Hall Madonna – too much money for such a small painting, and was it even genuine? Rinder dared not risk the good name of the Felton Bequest again on the tiny Vermeer in excess of £20,000. Imagine the NGV’s Dutch collection if it showed both Rembrandt and Vermeer at the height of their powers. It would be that much harder to take it for granted.