I think it was Peter Brook who said the longest that a staging of a play could remain vital was five years. The Hayloft Project’s Thyestes, directed by Simon Stone and adapted from Seneca’s tragedy by Stone himself, Thomas Henning, Chris Ryan, and Mark Winter, was first seen at the Malthouse Theatre in 2010. Notwithstanding a handful of updates to the text, this production feels like it belongs to a particular moment in time, appearing amid the largely confected furore around the proliferation of adapted classics on Australian stages. There is something, too, in its depiction of a certain kind of hypermasculinity that seems to date it to a specific period in Melbourne’s independent theatre scene, before the recent upsurge of queer work by Sisters Grimm and others. And yet this Thyestes remains viscerally alive: confronting and funny, a deeply compelling mix of the excessive and the ascetic, like the pared-back, shoulder-to-the-wheel rock and roll of a middle-period Bruce Springsteen album. (The Boss does not feature in Stefan Gregory’s raucous sound design, but Wu Tang Clan, Queen, and Roy Orbison do.)

In Seneca’s play, a first century CE fabula crepidata, King Pelops, son of Tantalus, banishes his sons Thyestes and Atreus for the murder of their half-brother, Chrysippus. Following Pelops’s death, a struggle for the throne ensues, which culminates in the brothers’ false reconciliation, and finally Atreus’s notorious revenge against his usurping brother: the killing and dismemberment of Thyestes’ children, the bodies of whom are then served to their unwitting father during a feast. In Stone’s version, billed as ‘after Seneca’, these details are compressed into their bare essentials and flash up on LED displays between scenes – ‘moments between atrocities’, according to Simon Stone’s director’s note – a convention that liberatingly shears the text of exposition. Cannily, both halves of the play – the first tracking forwards in time, the second backwards – lead to the climactic banquet, here rendered as a kind of centrifugal force, flinging into view not only the inciting incident of Seneca’s play but also the brutalising history of the House of Tantalus, that is, the cycle of killings from the original myth that precede the murder of Chrysippus. In this way, Stone’s adaptation is firmly located in the contemporary, both in its setting – a void-like, though recognisably twenty-first-century set of domestic interiors – and its conceptualisation of violence as the dark fruit of intergenerational trauma.

One of the great strengths of this production is the way the audience is lured by the text’s demotic idiom, as well as the supremely naturalistic performances by Thomas Henning (Thyestes), Toby Schmitz (Atreus), and Chris Ryan (Chrysippus, and sundry characters, including all of the women), into a world that is more kitchen sink-banal than classical tragedy-heightened, a fact that makes the play’s periodic, dislocating eruptions of operatic extravagance all the more impactful. Stefan Gregory’s orchestral score drowns out the first words of the opening scene as though we might have tuned into the conversation between Thyestes, Atreus, and Chrysippus at any point. In their jeans, T-shirts, and hoodies, they drink wine and chat about Chrysippus’s latest fling, airports, and Guatemala City. Atreus, playing with his phone, apologises when a message alert interrupts the easy flow of talk.

The dialogue – matey and unaffected, and free from the kind of lyricism that gestures to a world beyond what we can see – draws our laughter because it is blackly funny, but also because its verisimilitude encloses us, discomforts us. Thus are the source material’s extremes of violence and cruelty (an influence on Titus Andronicus, the bloodiest of Shakespeare’s plays), configured not as items of distant curiosity but as phenomena, in every sense of the phrase, closer to home. Nothing could be less commonplace than cannibalism, but Stone lets us see the ordinary behind the extraordinary, the human within the inhuman. We understand on one level that the play, as in all mythologies, is bigger than itself, but that it is also the story of two brothers riven by familiar human follies – greed, lust, envy, and all the rest. By casting a man in the female roles – including the suicidal Pelopia, raped and impregnated by her father, Thyestes – Stone lays bare the suffering of individuals in a way that refuses the misogyny that all too often allows us to minimise women’s experiences of abuse. 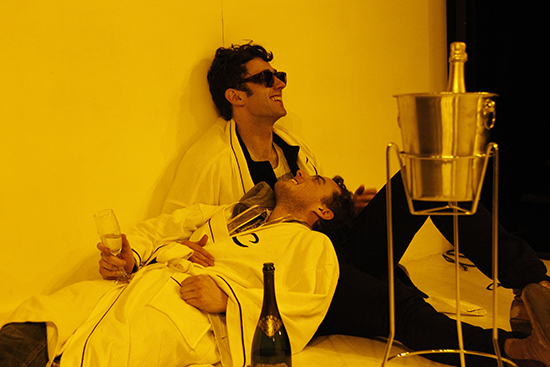 And it is all so unflinching. The Romans made visible on the stage the violence the Greeks had euphemised with dialogue and gesture, but here Stone goes one step further – trapped in Claude Marcos’s box-like set, and flanked by an audience arranged in traverse, there seems not even the possibility that the actors can leave the stage. Our only relief comes when curtains on either side of the stage drop down between scenes, like two enormous eyes blinking or, perhaps, as the scenes contract into paroxysms of violence and horror, deliberately closing, afraid of what they might see and, in their seeing, reveal to us.

Thyestes (The Hayloft Project) will continue at the Space Theatre until 7 March 2018 for the 2018 Adelaide Festival. Performance attended: 2 March 2018.