The four solo survey exhibitions currently staged at NGV Australia as its Summer 2017–18 program emphatically delineate the institution’s position on contemporary art. While the juxtaposition is headily abrasive, the aggregate speaks of certain attributes that it is keen to foreground. Contemporary art, embodied by this ensemble, is spectacular and behemothic, vivid and kaleidoscopic. The works are resolutely tactile, each of the artists invested in fastidiously worked materials. A cornucopia of worlds unfold, concentrated in shimmering patterns that march across painted surfaces, obliterate depth of field, draw out the sculptural properties of layered paper, or collapse architectonic space into implausible folds.

Del Kathryn Barton: The Highway is a Disco epitomises the sensational end of the spectrum, Barton's paintings, inkjet prints textile collages, watercolour drawings – and recent foray into HD video – collectively forming a den of rapturously erotic imagery. Hybrid female figures morph with orchids or linden leaves, and nestle near horses or peacocks, the surface of the works teeming with a decorative cavalcade of fathomless intricacy. The figures are stylised with hallmark Barton traits – naked, nubile, and lanky, often featuring exposed breasts as multiple teats and embellished with delicate, mutating patterning. They sport bony faces with gargantuan eyes and lips, and their erogenous zones are intensively sketched. Of Pink Planets (2014) typifies this convention, the figure’s five teats emerging from a torso covered with ornamental filigree, a wallaby clasping its thigh and a snake curling around its arm, while the Barton aesthetic is augured in the early watercolour Girl #8 (2004), with its oversized glassy eyes and whorls of decorative patterning.

Barton’s work forms a highly illustrative lexicon that shows the clear precedent of fin de siècle Viennese Secessionist painter Gustav Klimt and, more so, his pupil Egon Schiele – famed for his febrile and sexualised portraits of naked svelte bodies – melded with the graphic aesthetic of 1970s schoolgirl swap cards and a Japanese mode of cuteness known as kawaii. There is an implied pagan world of goddesses, mythic beasts, and mutant creatures, but the absence of a symbolically unifying system sees this dissolve into a girlish sexual fantasia in trippy, hyper-chromatic overdrive. 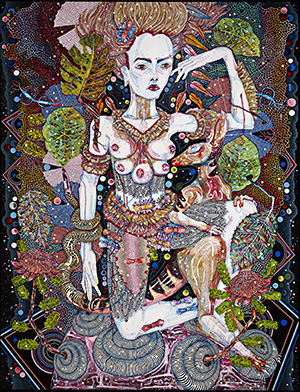 Del Kathryn Barton, of pink planets, 2014, (Collection of Boris Tosic, Sydney © Del Kathryn Barton)Louise Paramor’s large-scale plastic sculptures in Palace of the Republic, by contrast, derive from a particular class of mass-produced goods that speak of a capitalist culture of consumer commodities destined for obsolescence. Plastic tables and chairs, garden hose, balls, buckets, funnels, and jelly moulds have their utilitarian functions foiled through being reworked into jaunty composite structures. Paramor craftily exploits the apertures of these objects to join them together in unprescribed ways, so that they too constitute mutant forms, albeit of a disposable variety.

Studies for a Boomtown (2016) is a constellation of 126 such sculptures, each formed from three or four plastic components set into novel shapes that, on the one hand, read as hypothetical functional objects such as multi-speed vibrators, pulverisers, or tiered bento boxes, and, on the other, as anthropomorphic toys. Collectively, the shapes suggest a field of arrested dynamism, as if plucked from a scene from Pixar Studios’ blockbuster Toy Story franchise, their static display masking nocturnal animatronic capacities. The Studies in turn function as maquettes for a suite of large-scale sculptures (displaying Paramor’s trademark honeycomb paper-folding technique), which, although more grandiose, similarly oscillate between geometric shapes nudged into kookiness and oversized Christmas baubles. A playground of quasi-architectural follies and lolly-coloured trifles, Paramor’s sculptures are overtly playful, while also making one feel trapped in a Toys R Us department store. 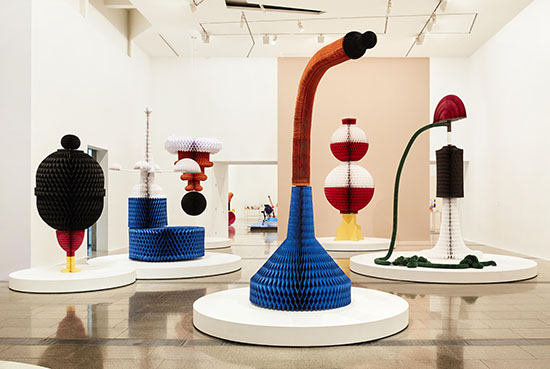 As senior artists, Gareth Sansom and Helen Maudsley, represent artistic practices of a qualitatively different kind. Gareth Sansom: Transformer is a comprehensive survey of the artist’s career, spanning works from the mid-1960s to the present: a tempest of provocative, relentlessly painterly experiments. The canvases teem with energy, their surfaces fractured into overlapping zones that bristle against one another with a kind of fury. They are slashes into pictorial space, foaming vortexes that simultaneously suck and spew out imagery. Graphically sketched heads jostle in claustrophobic compositions, shot through with expressive lines and drips of paint. Figures bend and contort across segments of unstable ground in heated colours of cadmium red or bubblegum pink. In Mr Art Meets Mr God (2011) two grotesque heads eyeball each other across a luridly coloured ground, almost but not quite linked by schematic lines running across a field of obstructions. Friendship’s Road II (1985–87) is a hurly burly of painterly action unfolding above a cathedral across a sky crammed with grimacing faces, overlaid with crosses and streaked by spidery scaffolding.

The works grapple with existential questions – of mortality, faith, human interaction, and human isolation. Sansom’s vernacular style is indebted to British mid-century precedent: the collage method of Ian Hamilton and the offbeat figuration of Peter Blake, but mostly the tortuous, angst-ridden figures of Francis Bacon, with their elastically decomposing forms suffused with a tone of nihilism and ennui. Sansom takes these influences into a territory that is more eruptively maverick yet similarly disconsolate. 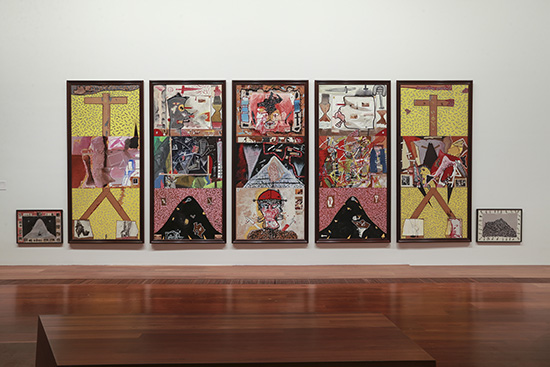 Against these histrionics, Helen Maudsley’s paintings offer a world that is understated and intricate, yet no less robust. Helen Maudsley: Our Knowing and Not Knowing is not a retrospective but a collection of recent works made between 2013–17 that show the artist (now ninety) to be at the peak of her powers. The paintings have a rigour that testifies to a lifetime of artistic commitment within tightly defined parameters, in a continual honing of the artist’s vision. Maudsley’s practice represents an idiosyncratic recalibration of a Cubist lexicon, hoisted from the early twentieth century to the present. It is a highly developed language of pictorial spatial relationships that shows the operation of a nimble and inventive imagination. The paintings are little crystalline universes, densely balanced arrangements that dislocate figure/ground relations, transposing them into labyrinthine compositions. 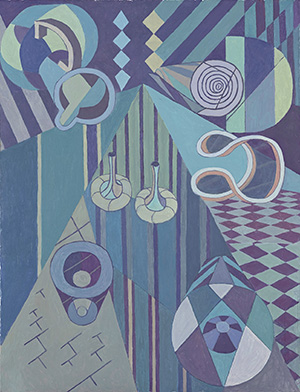 Helen Maudsley, At; Into; Down, Across, 2017 (Collection of the artist, Melbourne. Courtesy of Niagara Galleries, Melbourne © Helen Maudsley )Architectural elements abut motifs that recur across the canvases – checkerboard tiles, alphabet letters, chairs, doors, windows, and glasses, and an array of volumetric shapes – that melds pre-digital space with the virtual space of the screen, in particular the 3-D environments of architectural modelling programs and digital games. The Leaf. The Hand. The Landscape. The Killer. The Innocent One. (2015) depicts an enigmatic terrain conjoining a topographic aerial view, architectural shards, an oak leaf, and a robotic hand, as if each element were a portal into another game dimension. At; Into; Down, Across (2017) wilfully collides multiple checkerboard planes into a faceted microcosm of syncopated rhythms.

In answer to his question, ‘What is the Contemporary?’ the Italian philosopher Giorgio Agamben concluded that contemporaneity resulted from an ‘out-of-jointness’ with time – that is, an equivocal relationship with the present era which one both adhered to and kept at a remove. If this is the case, then more than any of the artists on display, Helen Maudsley represents a singular embodiment of the contemporary, her gem-like paintings harnessing the present to the past in a kind of luminous and revelatory disjunction.