The political and sexual machinations on the stage at Angel Place in Sydney, ostensibly depicting an event during the inglorious reign of Emperor Nero in 54–68 CE, might be interpreted in a very contemporary light in terms of politics and society. An opera that represents ruthless political ambition allied to lust, cruelty, corruption, and general amorality, can certainly find any number of present-day resonances without stretching credibility too far. But Claudio Monteverdi’s final opera, L’incoronazione di Poppea (1642), was directly relevant to the political situation in the first half of the seventeenth century in Italy, while simultaneously exploring some of the oldest and enduring philosophical questions regarding political thought and practice.

Venice, where the opera was first performed, had a complex and troubled relationship with the hegemony of Rome, both the seat of the papacy and the Holy Roman Empire. The incumbent pope, Urban VIII, was nepotistic, corrupt and determined on extending the papal territories, thus directly threatening republican Venice: a figure, in Venetian eyes, who could be seen to have many parallels with Nero. In the opera, republican virtues of self-mastery and discipline are contrasted with the barbaric and unbridled desires of an unruly emperor. This includes popes, embodied in the opera by the diametrically opposed figures of Nero and Seneca.

While he was not the ‘inventor’ of opera, Monteverdi (1567–1643) certainly did more than any other Italian composer of the late Renaissance to develop this radically new idea of fusing music with drama. It was Monteverdi’s famous seconda practica – arguing for the free and flexible use of dissonance to heighten the emotional impact of the drama – that shifted the emphasis away from a purely formal musical aesthetic that characterised the music of the late sixteenth century. He advocated the primacy of words over music – the representation of speech in a monodic, heightened, rhetorical musical style – a creative tension that has been at the heart of operatic practice ever since. Monteverdi first experimented with this new musical aesthetic in his celebrated madrigals, but it was in his first opera, Orfeo (1607), performed in Mantua, that he solidified this strategy. Orfeo is generally accepted as the first ‘great’ opera that has a consistent place in the repertory.

In his final opera, Monteverdi was moving away from the seeming freedom, but also potential boredom, of almost endless recitative which characterised the earlier works, to a more formal structure of arias, duets, and other closed musical forms which all point towards the future of opera. This is why Poppea in many ways sounds so ‘modern’ compared to other works by the composer in which primacy is given to the words, sometimes at the expense of musical interest. This opera swings the pendulum back the other way – an oscillation that characterises the art form to the present day. It is this musical richness, and, most importantly, the abundance of melody, that makes Poppea possibly the most accessible of all the works in opera’s first fifty years. Yet the sources of the opera are fractured, unlike Orfeo which has come down through the ages relatively intact. There is much dispute about the ‘authenticity’ of many aspects of Poppea’s score; the most celebrated instance of this is the sublime final duet for Nero and Poppea, Pur ti miro, which many scholars believe is not Monteverdi’s work. Of course, in the end this does not really matter; what is crucial is the effectiveness of this musical moment in the context of the whole opera. 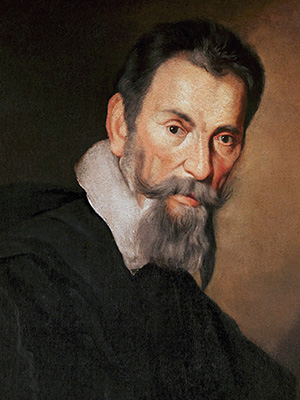 Claudio Monteverdi, Bernardo Strozzo, c.1640 (Wikimedia Commons)Monteverdi’s move to Venice in 1613 is another crucial moment in the early rise of opera, for it was in this city in 1637 that opera first moved out of the exclusive clutches of the aristocracy and became a public, and popular form of entertainment, with several theatres soon vying for audiences. L’incoronazione di Poppea is a pivotal work in the story of opera as it is the first, still frequently performed opera, in which figures from mythology are replaced by actual historical figures, starting a long tradition that continues to the present with operas such as John Adams’s Nixon in China (1987) and Doctor Atomic (2005).

Updating the staging of operas has a relatively long history and is almost de rigueur these days, and certainly characterises the performance history of Poppea. Pinchgut Opera have opted for a contemporary retelling of the tale. The costumes, including ubiquitous mobile phones and an impressive array of high-heeled shoes, make this abundantly clear. This is a tale about the abuse of power cloaked in the name of love, and the philosophical and metaphoric nature of much of the text precludes many of the egregious clashes that occur when operas that are more context and text specific are transposed into other time periods.

The challenges of Angel Place as an operatic performance venue were addressed with much imagination in the production by Mark Gaal, with designs by Charles Davis and lighting by Ross Graham. The setting is ambiguous; grey brutalist concrete columns vaguely suggest the classical past, but it could just as well be a grungy, rather insalubrious part of the contemporary city, frequented by violent gangs and people having dropped out of society. The recent 2017 Italian Netflix extravaganza, Suburra, also set in the underbelly of Rome, springs to mind in the setting as well as the relationships. Gaal directs his performers with attention to detailed characterisation, utilising the limited space effectively. A nice touch is the depiction of the gods as down-and-out, marginalised figures, commenting on the events.

The performers engaged with the music and demands of the staging with aplomb. Helen Sherman as Poppea was ably matched by Jake Arditti as Nerone. While one might like a tenor – or even a baritone – in the role to heighten the vocal texture contrast in these two roles, countertenor Arditti sang with ardour and style, matching Sherman’s vocal richness. Occasionally, Arditti was tempted to drive his already substantial vocal tone to extremes, resulting in a hardening of tone, but he captured the mercurial nature of the character effectively. Sherman had a slightly tentative start with the lower register a little muffled, but the voice bloomed during the course of the evening, a wide range of vocal colours and expressive articulation conveying the complexity and psychology of the character. Natalie Christie Peluso brought vocal freshness and charm to the roles of Ottavia, Drusilla, and Virtù. This is a sumptuous voice with evenness throughout the range; but occasionally the passion in her portrayal of Ottavia somewhat overwhelmed the text. 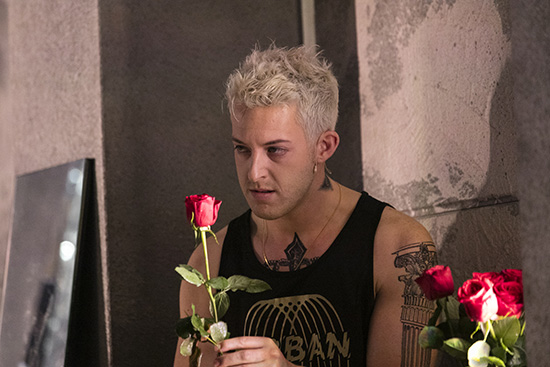 Roberta Diamond, Owen Willetts, and Kanen Breen were all outstanding in other crucial roles. Breen delivered an object lesson in crisp vocal and textual articulation, as well as revealing a poignant humanity in the character of the nurse, Arnalta. David Greco, a Pinchgut stalwart, had round vocal tone, incisive delivery, and expressive musicality as a dignified Seneca, although the voice does not possess quite the tonal depth one might like for the character. Strong performances were provided by Jeremy Kleeman. Adam Player, Jacob Lawrence, Troy Honeysett, and Govinda Röser in other roles. 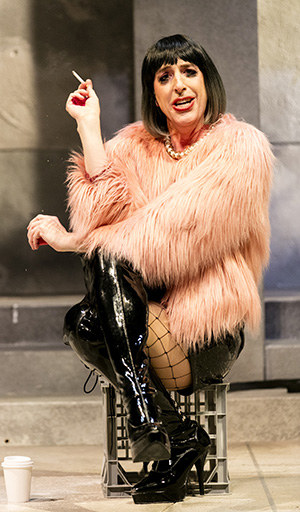 Kanen Breen as Arnalta in Pinchgut Opera's Coronation Of Poppea (photograph by Brett Boardman)It is heartening to see the way in which Pinchgut Opera continues to deploy a range of Australian as well as overseas singers. The Poppea cast has young, up-and-coming Australian singers, several of whom have ventured overseas for study, enjoyed professional success, and then returned to these shores to establish careers here as well. This is often the most difficult period for performers who are still in the relatively early part of their careers and who have not yet fully made the breakthrough in principal roles with the state opera companies. Permanent principal positions with opera companies in Europe are becoming increasingly difficult to achieve, not to mention the vastly more challenging situation for singers in Australia. Pinchgut operates at a highly professional level – crucial for young singers who need the opportunity to work with experienced professionals – serving both the development needs of performers, as well as regularly providing Sydney audiences with the opportunity to enjoy lesser-known works of the early operatic repertory. Bravi tutti!